Vaccine diplomacy is becoming a hot button issue in the region, whilst many leaders continue to push for a travel bubble, Hugh McClure writes.

The rise in positive COVID-19 cases in French Polynesia has continued to slow, with just 105 cases recorded in the past seven days. This brought the territory’s total to 18,206. Elsewhere, the cumulative number of cases recorded in Guam has reached 7,457, and 900 cases have now been recorded in Papua New Guinea (PNG).

One new case has been recorded in Fiji, bringing its total to 56. The Indonesian provinces of Papua and West Papua have now recorded 15,838 and 6,895 cases respectively. No new cases have been recorded in Vanuatu, Samoa, Marshall Islands, or Federated States of Micronesia (FSM) in the past seven days.

Here is a snapshot of policy responses to COVID-19 in the Pacific region, correct as of 12pm AEDT, 10 February 2020. 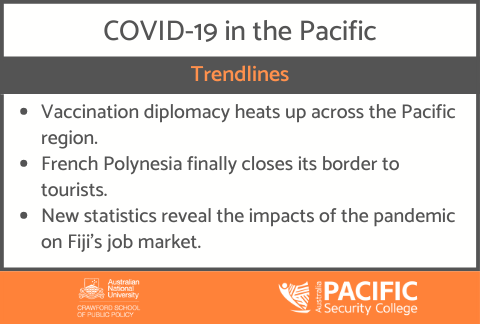 Vaccine diplomacy is emerging as a key hot-button issue in 2021, with the region’s donors each looking to provide vaccines to Pacific Island countries. New Zealand has announced US$54 million for vaccine access in the Pacific, and ongoing cooperation with Pacific Island Forum states (PIFS) and national governments to assist the rollout.

In Australia, which has secured 150 million vaccines for its residents and the Pacific region, an infectious diseases expert has called on the government to vaccinate people in the Pacific ahead of domestic residents, citing their increased vulnerabilities to the virus.

The PNG Government has denied any agreement with China over the provision of COVID-19 vaccines, despite the Chinese Government reporting that it would send vaccines to PNG. Micronesia continues to lead the region in terms of administering vaccines. More than 10 per cent of the population of the Northern Mariana Islands have now been vaccinated. In French Polynesia, close to 3,000 residents on Tahiti and Moorea have been vaccinated.

Meanwhile, COVAX has confirmed the allocation of 108,000 doses of the AstraZeneca vaccine for Solomon Islands. Approximately 40 per cent of the doses are expected before March, with the remainder due before the end of June. Samoa has set the target of vaccinating 60 per cent of the population this year, with the first vaccines expected in March. Fiji Commerce and Employers Federation CEO, Kameli Batiweti, said any delay in mass immunisation against COVID-19 would impact business.

After months of rapidly escalating case numbers and calls to implement restrictions, travel to and from Tahiti has finally been restricted to ‘compelling’ cases only, under new border restrictions passed in France. Despite this, French Polynesian President Fritch has said that he hopes the border will again reopen within three months, claiming that the economic impact in his territory is the greater threat.

How is Papua New Guinea responding to COVID-19?

Other parts of the region have also tightened border restrictions. Tonga has extended its quarantine isolation period from 14 to 21 days in response to the new variants of COVID-19 detected in Australia and New Zealand.

Australian Prime Minister Scott Morrison has said that he hopes to see progress on a Pacific travel bubble. This comes after the NSW Government approved the entry of 800 seasonal workers to the state. Not all countries and territories are pushing for travel, however. COVID-free Tokelau is the only Pacific nation not in talks with New Zealand about a future one-way travel bubble. Kelihiano Kalolo, the Faipule (leader) of Tokelau’s Atafu atoll, has said that his community is continuing to prefer a cautious approach, particularly in light of new variants of the virus.

The continued, steady stream of COVID-19 cases being detected across PNG has led to concern that the true scale of positive cases in the country is much greater than what has been recorded. PNG’s health department secretary has said that low testing rates have led to an underestimation of the extent of the virus in the country.

New figures from the Reserve Bank of Fiji reveal a 66.7 per cent annual decline in job vacancies. The fall in vacancies reflects the weakened labour market due to the economic impacts of the COVID-19 pandemic. In other economic news from Fiji this week, Vodafone recorded losses of $3.17 million due to reduced consumer spending through the pandemic.

Vanuatu has repatriated more of its citizens back home than any other Pacific Island country, according to statistics reported this fortnight. 5,000 ni-Vanuatu citizens have been repatriated since the pandemic began. At the other end of the spectrum, American Samoa welcomed its first repatriation flight since borders were closed this fortnight from Hawaii.

he impacts of reduced labour flows have become clear in Samoa, where a nine-month backlog on forensic examinations has developed at the mortuary due to the country’s inability to have a forensic examiner enter the country. Samoa’s government has agreed to more repatriation flights during the second quarter of 2020, with flights anticipated from New Zealand, the mainland United States, Hawaii, Alaska, and Europe.

Briefly this week: Tonga will sit out the latest round of Recognised Seasonal Employer labour mobility scheme to New Zealand due to quarantine and repatriation difficulties; the Solomon Islands Government has passed a recruitment freeze for public service positions; Japan has provided a loan to Solomon Islands for COVID-19 response and recovery; and Aircalin have begun scenic, domestic flights of New Caledonia’s beaches.