Papua New Guinea is experiencing a large-scale resurgence of COVID-19 infections, whilst Fiji has received the region’s first vaccines through the COVAX scheme, Hugh McClure writes.

Today marks 12 months since COVID-19 was first detected in the Pacific Island region. American Samoa, the Cook Islands, Kiribati, the Federated States of Micronesia, Nauru, Niue, Palau, Tokelau, Tonga and Tuvalu all continue to be virus free – a remarkable achievement.

But in sobering news, the escalation of confirmed COVID-19 cases has continued in Papua New Guinea (PNG) this fortnight, where 1,741 cases of the virus have now been detected. World Health Organization (WHO) representative in PNG Anna Maalsen labelled the situation as “rapidly changing”. As of 10 March, PNG had recorded 21 deaths overall from COVID-19 pandemic, with five of the deaths in the previous 24 hours.

Elsewhere in the region, the spread of the virus continues to slow in French Polynesia, which has now recorded 18,495 cases and 141 deaths since the pandemic began. In Guam, the tally has reached 7,543 cases and 133 deaths, while 146 cases have now been confirmed in the Northern Mariana Islands.

A recent flurry of cases at the border in Fiji has brought its total to 66. Two new cases have been confirmed in Vanuatu’s quarantine facilities this fortnight, bringing the Melanesian country’s total to three. 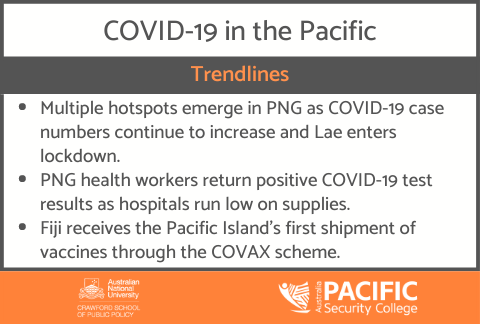 ultiple COVID-19 hotspots have now been identified in PNG according to the WHO, as the situation in the Pacific Island region’s most populous country continues to deteriorate. With PNG’s second-largest city, Lae, now in lockdown, National Capital District Governor Powes Parkop said that it is possible that Port Moresby may also go into another lockdown if daily case numbers continue to climb. Meanwhile, the head of St John Ambulance PNG Matt Cannon said that it is “concerning to see health workers now testing positive” to the virus.

In an alarming indication of the virus’ true spread in PNG, 40 per cent of women admitted to the labour ward in Port Moresby’s hospital are testing positive for COVID-19. With no isolation facilities available to treat infected patients separately, the virus is continuing to spread within hospital facilities.

Port Moresby General Hospital has begun scaling down services in response to COVID-19 cases amongst its staff and a lack of supplies. Supplies are also running short in Bougainville and the autonomous region’s health minister has said that the true number of cases is likely far greater than what has been reported, with the region now running out of test kits. The Solomon Islands prime minister has urged his citizens to avoid contact with people from Bougainville, citing virus concerns.

The worsening situation in PNG has also been identified in Australia, where multiple cases of COVID-19 have been detected in hotel quarantine among PNG travellers arriving in Cairns. The Queensland Government is now accelerating vaccinations in the Torres Strait as a precaution.

In vaccine news this week, the PNG government has finalised approvals for the AstraZeneca vaccine, paving the way for vaccinations to begin as soon as next month. Prime Minister Marape said that vaccinations for healthcare workers will be prioritised. Japan has listed PNG as one of 25 countries in the Asia Pacific that it will assist by upgrading infrastructure ahead of the vaccine drive. 8,000 vaccines have now been administered in French Polynesia, while 24,000 vaccinations have been administered in American Samoa. The Tongan Government has set a target to vaccinate 70 per cent of the country’s population by the end of 2021.

Fiji became the first Pacific Island country to receive vaccines through the COVAX scheme this fortnight. 12,000 doses of the AstraZeneca vaccine have now arrived in the country, with 6,000 front-line workers at the front of the queue to receive their shots. Fijians may now register for the COVID-19 vaccine by using the digitalFIJI online platform.

ith many vaccinations now administered, the Northern Mariana Islands is reviewing its quarantine processes. Health authorities have flagged a shift to a five-day self-quarantine period for returning residents, provided they have already received their vaccine. In light of the pandemic, the Northern Mariana Islands has appealed for a permanent United States National Guard posting to ensure that there are service members available for future natural disasters and other security events.

Vanuatu’s Council of Chiefs on Efate has decisively advocated against government plans for a travel bubble with New Caledonia. Chiefs have slammed plans for the so-called Tam Tam Bubble, stating that while the economy can recover, lives lost to COVID-19 will never do so Meanwhile, it has been announced that all businesses in Port Vila must now reinstall handwashing facilities.