The Fijian Government has refused to impose a lockdown despite exploding case numbers, whilst Palau has announced that it has achieved the vaccination rate necessary for herd immunity, Hugh McClure writes.

With 37,582 cases of COVID-19 and 317 deaths, Fiji has overtaken Australia to become the Pacific Island Forum member country with the highest number of COVID-19 cases – despite having just 3.5 per cent of Australia’s population. More than 27,000 cases of COVID-19 have been recorded in Fiji over the past month.

French Polynesia is now in the grips of a catastrophic second wave, with 23,902 cases and 166 deaths now recorded, up from 19,392 cases a fortnight ago. More than 90 per cent of hospitalised patients have not received a vaccine.

Papua New Guinea (PNG) has recorded 17,806 cases and 192 deaths, though testing has been significantly scaled-down following government directions, Guam has recorded 8,439 cases and 143 deaths, the Northern Mariana Islands has recorded 210 cases and two deaths, and New Caledonia has recorded one new case this fortnight, bringing its total to 134 cases. There have been no new cases in Wallis and Futuna, Solomon Islands, Marshall Islands, Vanuatu or Samoa.

Here is a snapshot of policy responses to COVID-19 in the Pacific region, correct as of 12pm AEST, 11 August 2021. 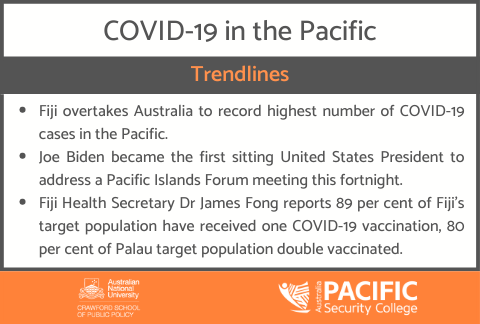 Pacific Islands Forum leaders met for a virtual summit this fortnight to mark the organisation’s 50th anniversary. The Forum, hosted by Fiji Prime Minister Frank Bainimarama, discussed vaccine distribution and administration logistics, with equitable supply across the region raised as a priority issue.

President Joe Biden addressed the Forum, promising leaders that the United States will ‘dramatically’ cut emissions, and provide vaccines to the region with ‘no strings attached’. It marked the first time a sitting American president has addressed the Forum. Notably, four Micronesian leaders were absent, with only the president of Nauru in attendance.

In an effort to prepare Fiji’s infrastructure for the eventual reopening of the tourism industry, the Australian Government has signed a $68 million financing package to Fiji Airports, through its Australian Infrastructure Financing Facility for the Pacific.

The United States looks set to donate 300,000 doses of the single-shot Johnson and Johnson vaccine to PNG. The PNG Trade Union Congress has warned that it will launch industrial action on private sector employers who impose ‘no jab, no pay’ policy. Ongoing vaccine hesitancy remains an issue in PNG, as rocks have been thrown at vaccine awareness workers in the Western Highlands region.

Pacific Step-up or business as usual?

The Tongan Government is expected to announce a compulsory vaccination policy, as more doses of AstraZeneca have been shipped from Australia. Vaccines from Japan and New Zealand are also expected. Meanwhile, the Samoan Government has launched a travelling COVID-19 vaccination drive.

The vaccination rollout in Palau continues to progress, with authorities reporting that the vaccination level for herd immunity has now been reached. More than 80 per cent of the eligible population are now fully vaccinated. Notably, 65 per cent of 12–17-year-olds have also been vaccinated.

In light of the country’s vaccine success, there are now hopes for an economic rebound with increasing tourist and United States military travel. Palau’s Ministry of Health’s spokesperson Gaafar Uherbelau said the country will allow open travel for vaccinated tourists who can prove a negative test.

Seasonal workers from Samoa, Tonga and Vanuatu will now be allowed to enter New Zealand without quarantining, under loosened restrictions announced by Prime Minister Jacinda Ardern this fortnight. New Zealand’s cabinet also clarified that it may consider critical medical travel to New Zealand from these countries under some circumstances. Solomon Islands declared its disappointment that it was not included on the list of countries to benefit through the scheme.

Briefly, discussions have commenced between Vanuatu and China to establish a direct air route to boost travel and cooperation. Additionally, PNG and Indonesia have discussed border management issues.

As the outbreak in Fiji continues to spiral out of control, there is growing concern that the government is becoming increasingly hostile to expert opinions and critiques. Now recording a positivity rate of 32 per cent, more than six times the rate at which the World Health Organization deems an outbreak to be ‘out of control’, the Fiji Government has refused to impose a lockdown, despite calls from many epidemiologists.

Health professionals who have aired dissenting opinions have been criticised by the government. Increasing numbers of opposition MPs have been arrested in recent weeks for criticising changes to land policy, an issue about which New Zealand has registered concern.

Transparency watchers have also questioned a decline in government accountability in PNG during the pandemic. There are fears that the country is not properly prepared for the 2022 Election, and that it may be delayed.

NG’s parliament has been routinely suspended throughout the pandemic, with it sitting this week for the first time in six months. Due to prolonged suspensions of parliament, a majority of public bodies have failed to submit annual financial statements, according to Transparency International PNG.

There are concerns about the possible longer-term impacts of the increased powers and reduced accountability ascribed to governments through the pandemic. Many countries have announced ongoing States of Emergency to deal with the pandemic, with Tonga announcing a renewal of its State of Emergency for a 17th consecutive month this fortnight.