COVID-19 cases in Papua New Guinea (PNG) have risen rapidly this week, whilst any hopes of a Pacific ‘tourism bubble’ have been dashed, writes Hugh McClure.

COVID-19 cases continued to rise rapidly in PNG this week, with the country now recording 214 confirmed cases of the virus and three deaths. The virus is clearly spreading geographically in PNG, with cases now confirmed in several provinces including Morobe, Sandaun, Southern Highlands, West Sepik, Western, and New Ireland.

Of great concern, the Autonomous Region of Bougainville has now returned its first positive result, that being a 22-year-old who recently traveled to the region from Port Moresby. In neighbouring Papua Province, The Jakarta Post reports 3,278 cases of COVID-19 and 557 cases in West Papua Province.

There has also been an increase in cases in the region’s territories this week. After three weeks of recording no new cases, one case of COVID-19 has been confirmed in quarantine in New Caledonia, while seven additional cases have been confirmed in French Polynesia following the resumption of international tourism last month.

As curfew hours are wound-back in the Northern Mariana Islands, the Commonwealth has reported further cases, bringing their total to 48. Some 53 new cases were confirmed in Guam this week, including the Governor, bringing its total to 404. The increase in cases has resulted in the Governor ordering all bars in the territory to close for a fortnight while the number of people allowed at social gatherings has been halved from 50 to 25. 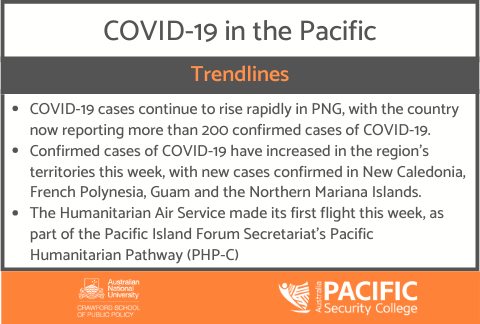 Despite the rapid increase in cases in PNG, Prime Minister Marape has ruled out any extension to the country’s 14-day lockdown, with schools set to resume in-classroom learning from 17 August.

While the Prime Minister has stated his commitment to intra-provincial flights, travelers will now need to access permits to fly between provinces, with roadblocks reimposed at several locations. Meantime, the PNG Opposition has lodged a Supreme Court challenge to the National Pandemic Act, with Belden Namah claiming that it impinges on constitutional rights of citizens.

Management of PNG’s health resources continues to be contentious. Authorities in Lae report shortages of PPE, while health staff at the Rita Flynn quarantine facility went on strike this week due to non-payment of salaries. They have since returned to work. The PNG Institute of Medical Research in Goroka has said it will lift testing capacity to as many as 1,000 samples per day after receiving new testing equipment.

Further afield, the OK Tedi copper and gold mine in Western Province had to shut down operations this week after the confirmation of seven COVID-19 cases. However, in New Ireland province, a miner who tested positive after traveling to the mine from Port Moresby in July did not affect operations at the Lihir mine, with the mine’s owner, Newcrest Mining stating that it has the capacity to isolate and treat the individual.

The Pacific Island Forum Secretariat this week welcomed the launch of the Humanitarian Air Service. The Service made its maiden flight from Nadi to Port Moresby to deliver 44 cubic metres of essential medical supplies. The Air Service forms part of the Pacific Humanitarian Pathway on COVID-19 (PHP-C).

Meanwhile, regional collaboration for border processes was discussed this week at a virtual roundtable convened by the United Nations and the Asian Development Bank. Representatives from the Solomon Islands, Kiribati, Tonga, Tuvalu, Vanuatu and Fiji attended the event. Leaders discussed border security measures and quarantine processes in order to best streamline approaches in order to kick-start safe travel within the region.

The Fijian Government has lifted the seasonal ban on harvesting, selling and consuming Coral Trout and Grouper in order to respond to food shortage concerns. Also making news in Suva, the EU has provided US$23.4 million in assistance to Fiji. Meantime, frustrations persist with the government for its continued slow payment of social welfare.

Finally, the bubble has burst this week as Fiji and Vanuatu’s hopes for a tourism bubble appear to have been dashed. Just days after Vanuatu’s PM announced the lifting of border restrictions to create a “Tam Tam Bubble” in September, the government has backtracked with only repatriation flights slated for the foreseeable future. Air Vanuatu has announced a schedule of international flights as part of the government’s second phase of repatriations, beginning on August 12. Some 2,000 ni-Vanuatu seasonal workers await repatriation from New Zealand, with 200 awaiting repatriation in Australia, 100 in Fiji and 20 in New Caledonia.