Two-thirds of Papua New Guinea’s small and medium-sized businesses have been forced to close their doors as a result of COVID-19, whilst French Polynesia’s president has tested positive for the virus, Hugh McClure writes.

There has been a tapered increase in COVID-19 cases in Papua New Guinea (PNG), with 565 cases now recorded, amidst low testing numbers. Solomon Islands has recorded its second case of COVID-19 – another repatriated student from the Philippines. Further north, Guam has recorded 3,078 cases and 378 deaths in total, while the Northern Mariana Islands has recorded 77 cases. The exponential increase in cases continues in French Polynesia with 2,754 cases and 10 deaths now confirmed, while the Indonesian-controlled provinces of Papua and West Papua have recorded 7,622 and 3,036 cases respectively.

Here is a snapshot of policy responses to COVID-19 in the Pacific region, correct as of 12pm AEST, 13 October 2020. 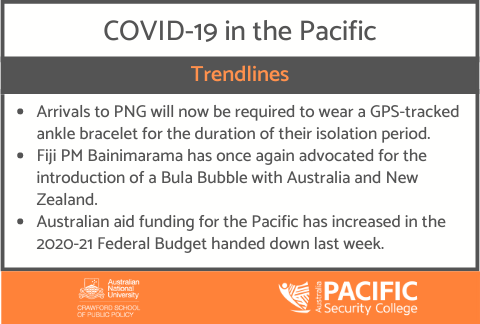 More than 150 workers arriving in PNG on a charter flight from China will be among the first required to wear GPS ankle bracelets after a new directive from Pandemic Controller David Manning was issued that requires all international passengers to wear the bracelets for the duration of their quarantine period. Owing to the historic interdependencies on PNG’s southern coastline, locals on an island in the Torres Strait are on high-alert this week for COVID-19 after the arrival of a group of PNG citizens who breached border controls. Also making news in PNG this week, after just a week into his new role as Health Minister, Sir Puka Temu has been referred to the Public Prosecutor for alleged misconduct.

The financial impact of the pandemic continues to be felt across the region. The Bank of PNG reports that two-thirds of micro, small and medium enterprises (MSMEs) in PNG have been forced to close their doors as a result of the pandemic. Elsewhere, Guam’s government has implemented a mortgage relief program for people struggling to meet their home repayment obligations.

Fiji Prime Minister Bainimarama has said that his country is committed to making the Bula Bubble with Australia and New Zealand work, as he celebrates 170 days without a new case of COVID-19 in the community. He has said that given the proven strength of Fiji’s border management and quarantine processes, he will continue to advocate for a Bula Bubble to support businesses who have borne the brunt of COVID-19 restrictions. Despite the substantial streak of days without a confirmed case, concerns continue about the level of testing in Fiji. Similarly, the new Cook Islands prime minister has stated that he would welcome a travel bubble with New Zealand within weeks. New Zealand’s Health Minister has indicated that safe travel zones could be opened up between New Zealand and countries with no community transmission.

Australia’s aid funding for the Pacific has increased to $1.66 billion in the country’s 2020-21 Federal Budget, which was handed down last week. PNG continues to receive the largest share of Australia’s aid funding, with an allocation of $491 million. New funding has been committed for the region through a separate two-year $305 million COVID-19 response package, which Foreign Minister Payne said will seek to address the economic and social costs of the pandemic. The Minister has further indicated that procuring COVID-19 vaccines and delivering them to the Pacific is a core commitment of the response through an allocation of $80 million to support vaccine access for Pacific and Southeast Asian countries.

Regional health ministers have met this week for the 71st Regional Health Committee Meeting. Ministers discussed COVID-19, immunisation, and other health security topics. The World Health Organization’s (WHO) regional emergency director has recommended that COVID-19 free states in the region retain their health status and do not become complacent. Further, WHO Regional Director Dr Takeshi Kasai has advised Pacific island countries to continue efforts to address non-communicable diseases (NCDs), stating that the incidence of NCDs increases the risks associated with contracting the virus.

French Polynesia’s President Edouard Fritch has joined the growing list of French Polynesians who have tested positive for COVID-19. The President had been in France to meet with President Macron, and returned a positive test result on his return home. In Tahiti this week, the French military released plans to repatriate Rapa Nui residents who have been stranded in Tahiti since the outbreak of the pandemic.

Finally, construction of new venues for the 2023 Pacific Games is underway. A design team from China have now completed their mandatory quarantine and have begun working with local authorities in Honiara to develop the project. The design team was flown into the country under controversy.