Around the world, countries are going into hibernation to flatten the COVID-19 curve. This week, the Pacific region faced further crisis with a major cyclone, which has complicated the pandemic response and proves other security challenges are not on hold.

Tropical Cyclone Harold, a category five system, brought winds of up to 285 kilometres per hour across the Solomon Islands, Vanuatu, Fiji, and Tonga, cutting power supplies and essential services, flattening communities, and destroying infrastructure. With it, several Pacific governments had the unfortunate task of calling dual states of emergency, both for the ongoing COVID-19 health security pandemic, and for the state of natural disaster brought by Cyclone Harold. 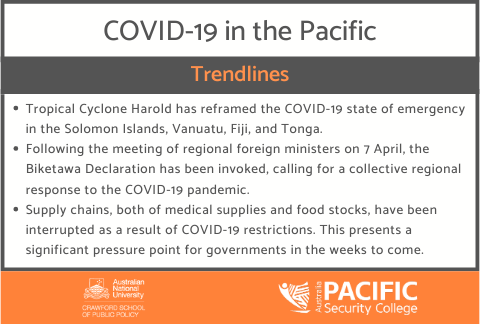 With 133 confirmed cases and five deaths, Guam continues to account for the majority of COVID-19 cases in the Pacific region. Elsewhere this week, the Northern Mariana Islands reported its second death on 7 April, with 6 total confirmed cases. Reporting of confirmed cases has flattened in Fiji, with 16 confirmed cases, up from 14 this time a week ago. 18 cases are reported in New Caledonia, 55 in French Polynesia, and 2 in Papua New Guinea, unchanged from a week ago.

Tropical Cyclone Harold has challenged Pacific countries as they respond to the unenviable dual security challenge of the COVID-19 pandemic and a state of natural disaster.

Since the cyclone first made landfall in the Solomon Islands, then Vanuatu, Fiji, and Tonga, reports have detailed near-devastation of many communities, including houses, schools, and other community infrastructure. Despite having strict social isolation policies in place to flatten the COVID-19 curve, 1837 people were reported to be in Fiji’s 66 evacuation centres as of 13 April, presenting a heightened challenge in managing COVID-19. As reports of casualties come through and the damage is assessed, the challenge will be to restore essential services, provide water and food, and maintain sanitation. In Vanuatu, the concern exists not just for potentially unreported COVID-19 cases, but additionally for transmission of red eye and dengue. While humanitarian assistance from Australia, New Zealand, France, and China has been reported to have arrived in the wake of the cyclone, concern exists in some quarters about its potential to introduce COVID-19 into particularly vulnerable communities.

Regional collaboration in response to the crisis has scaled-up in the past week. Forum foreign ministers agreed to establish a Pacific Humanitarian Pathway on COVID-19 (PHP-C), invoking the Biketawa Declaration at their meeting on 7 April. Ministers collectively labelled the pandemic as a “major crisis to the Blue Pacific, its peoples, wellbeing and communities.” The Pathway recognises the importance of collective responsibility in the Blue Pacific to catalyse regional, international, and development partnerships in a timely, safe, effective, and equitable manner. The Pacific Community (SPC) has additionally joined with the World Health Organisation to provide webinar training for health professionals in the region.

With travel suspended and borders closed around the region, concerns surrounding supply chains are coming into increasing focus. As PNG runs low on testing kits, its Health Ministry has flagged the possibility that samples will once again be required to be sent to Australia for testing, hindering an efficient response to COVID-19. Despite being the target of stimulus packages in some countries, including Samoa and Tonga, interrupted trade routes and supply chains raise alarm for the region’s food security. Concern over shortages has been expressed in Bougainville. The College has received informal reports of impending shortages of staple foods in a number of Pacific countries.