COVID-19 case numbers have increased substantially in Fiji this fortnight. 1,206 cases have been identified to date and five deaths recorded. On Wednesday 16 June, the country reported its highest daily case numbers on record, with 116 positive test results on that day alone, 93 of which were linked to existing clusters.

Despite the country battling a major outbreak of the Delta strain of the virus, Prime Minister Frank Bainimarama has emphatically ruled out a 28-day nationwide lockdown or the declaration of a State of Emergency, saying it would cripple the country’s economy and have a particularly negative impact on the most vulnerable.

Elsewhere in the Pacific Island region, Papua New Guinea (PNG) continues to record an increase of COVID-19 cases. 16,728 cases and 165 deaths have now been identified in the Pacific’s most populous nation, with 63 cases recorded on 15 June alone. 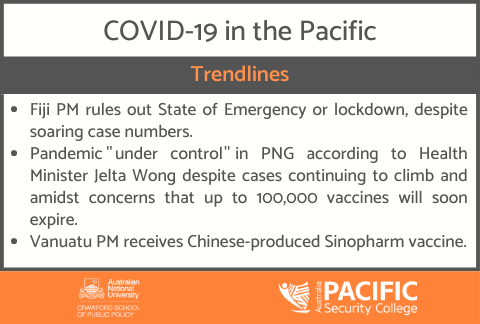 All eyes are on Fiji this fortnight as the country grapples with a significant outbreak of COVID-19. Authorities have said that the per capita incidence of COVID-19 in Fiji now exceeds that of Australia or New Zealand. The country’s main hospital, the Colonial War Memorial Hospital in Suva, has been cordoned off, following the identification of a cluster. The hospital will now be dedicated to responding to COVID-19, with a field hospital established to provide medical care for other issues.

As increasing numbers of frontline workers test positive, many healthcare professionals have been called onto Viti Levu from around the country to deal with the outbreak.

Fiji has appealed to Australia for help from the Australian Medical Assistance team (AUSMAT), and has called on the United Nations to use its convening power to assist the it deal with the COVID-19 emergency. Travel to Viti Levu from other islands has been suspended.

The social impacts of the outbreak in Fiji are being felt acutely across the country. The government has been urged to form a social support strategy as charities have been inundated with requests for assistance amidst food shortages.

PNG Health Minister Jelta Wong claimed the COVID-19 pandemic is “under control” in the country. The minister’s declaration comes despite new cases having been identified this fortnight. Manus has emerged as a hotspot, with Western Highlands, East New Britain, Milne Bay, Hela, and Port Moresby all recording more cases.

Lessons from a decade of disasters

The PNG Government announced new regulations that allow vaccinated travellers from low-risk countries to enter the country with only seven days quarantine. Quarantine-free travel continues to be a policy priority as Pacific communities seek to kick-start their tourism industries. Quarantine-free travel to French Polynesia is now permitted for French travellers who have received at least one COVID-19 vaccine dose.

The New Caledonian Government reported that Australian and New Zealand authorities have expressed interest in establishing a quarantine-free travel bubble this year. Further north, a South Korean airline unveiled plans to resume its route to the Northern Mariana Islands from 10 July.

Maladministration and corruption have been evident in the Solomon Islands’ State of Emergency management, according to claims made by Dr Claude Posala, the President of the Solomon Islands Medical Association. Dr Posala previously drew attention to instances of health officials allegedly selling-off personal protective equipment from hospitals.

The Marshall Islands Government has removed its 14-day quarantine period for boats entering the Majuro lagoon. As a result, Majuro has recorded its highest number of trans-shipments since before the pandemic. Majuro was the world’s busiest tuna trans-shipment port until 2019.

A team of young ni-Vanuatu engineers from the University of the South Pacific and Agence Universitarie de la Francophonie have produced a low-cost emergency ventilator to assist the COVID-19 response, with assistance from Vanuatu’s Ministry of Health and Medical Services. Access to ventilators has been a major issue for developing nations – including in the Pacific – in the fight against COVID-19.

As case numbers soar in Fiji, Australia has committed one million vaccine doses to the country. 41 per cent of Fijians have now received their first dose.

With fears that up to 100,000 vaccine doses in PNG could soon expire, Prime Minister Marape has called on his citizens to come forward for inoculation. Health expert Glen Mola has said it would be an “international shame” if the vaccines were to expire. Authorities in Port Moresby have said they have completed phase one of the city’s vaccine rollout and the vaccine rollout has commenced in Bougainville. PNG has been listed as one of 40 nations to benefit from a vaccine aid program launched by the United States.

Wallis and Futuna look set to return a third of its COVID-19 vaccine doses by the end of June, due to soaring vaccine hesitancy in the French overseas territory.

As nations around the world grapple with vaccine hesitancy, some policymakers are employing novel approaches to boost vaccination rates. Guam, for example, launched a ‘vax-n-win’ lottery prize to encourage people to get vaccinated.