Government and governance, Science and technology, Health | The Pacific

States in the Pacific are continuing their States of Emergency, albeit with reduced restrictions, whilst PNG has introduced new security laws to deal with the pandemic, Jay Caldwell writes. 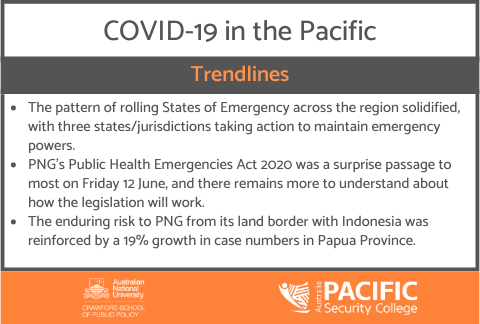 he COVID-19 pandemic has demonstrated that many of the levers Pacific countries and jurisdictions have to respond to this type of crisis sit outside of the health portfolio. For many countries, the declaration of a State of Emergency has been used to activate necessary powers and give authority to crisis leaders, such as the Emergency Controller.

Tonga, Samoa and Bougainville faced the end of their current State of Emergency (SoE) in the past week. All have chosen to continue with the SoE, albeit with gradually reducing restrictions and constraints.

Receiving international travelers remains the last restriction that all countries will need to manage, however, plans are beginning to emerge for visits from returning nationals and the pressure grows for Pacific inclusion in the Australia-New Zealand travel bubble.

With PNG’s State of Emergency due to finish on 16 June, the Government offered a surprise on Friday (12 June) with the passing of the PNG Public Health Emergency Act. The Government out-manoeuvred the Opposition by suspending Parliamentary standing orders, tabling the Bill and passing it with the strength of its numbers. Only 14 MPs voted against the Bill, with the Opposition seeing the draft Bill on the day of the vote. There is more to say on this Act, as it takes a hard security view of the capabilities needed to respond to a health emergency. The PSC’s Dr Henry Ivarature’s views from Port Moresby can be found here.

The Pacific’s peak risk continued to grow. On the Indonesian side of PNG’s land border, Papua Province added a further 14 per cent to its confirmed tally of cases, bringing it to 1249. While this is not as striking as the previous week’s growth of 50 per cent (from 725 to 1090), the porous border with PNG remains the most likely source of a substantial outbreak. But PNG officials appear to be doing what they can to mitigate risks from across the border. Both risk and mitigation were illustrated this week by the repatriation of 25 PNG citizens who had been imprisoned in Indonesia for illegal border crossing. The risk at the border was compounded by the potential for disease transmissibility from the prison environment. But the group was facilitated by agencies from across PNG Government, including foreign affairs, defence, health research, and local health services. Those repatriated were subject to immediate testing and isolation was conducted from the border handover.

Jay Caldwell is Director of Professional Studies at the National Security College. He has fourteen years of experience in the public service focused on national security and how central agencies can better support decision-makers.