The spread of COVID-19 in the Pacific island region continues this week, with Vanuatu detecting its first case of the virus. Elsewhere in the region case numbers continue to rise. Papua New Guinea (PNG) has now recorded 602 cases, Solomon Islands has recorded 16 cases, and Fiji has reported 35 cases. Further afield, Wallis and Futuna has recorded its second case and American Samoa has recorded its first three cases. In the French Pacific, New Caledonia has recorded 30 cases, while French Polynesia has recorded 11,706 cases and 39 deaths. In the Northern Pacific, the tally in Guam has reached 6,010 cases and 94 deaths, the Northern Mariana Islands has recorded 102 cases, and no new cases in Marshall Islands leaves its case count at two. Finally, the Indonesian provinces of Papua and West Papua have recorded 14,403 cases cumulatively.

Here is a snapshot of policy responses to COVID-19 in the Pacific region, correct as of 12pm AEST, 17 November 2020. 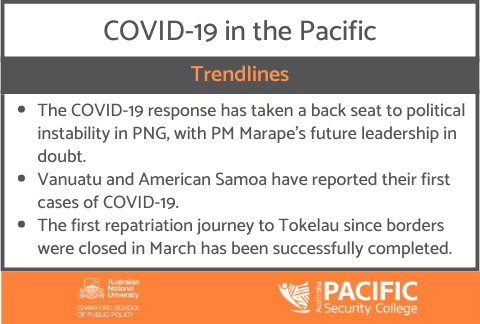 Prime Minister James Marape is facing a leadership challenge in PNG this week. His main challenger, Opposition Leader Belden Namah, has been an ardent critic of COVID-19 restrictions, citing their impact on the economy. Also making news in parliament, Health Minister Sir Puka Temu has expressed his disappointment that MPs did not wear masks in parliament, as is required. He has claimed that vaccines are likely to become available at the end of the year.

The closure of borders due to COVID-19 has cost PNG $27.27 million in lost revenue. Figures reported by Tourism Minister Walter Shnaubelt reveal 97.7 per cent of bookings were cancelled and 1,000 jobs have been lost as a result of border closures.

Air Niugini will operate a charter flight on 9 December from PNG to Solomon Islands and Fiji, in time for Christmas. The charter has been organised by WABS Pacific, an engineering company based in Fiji and will operate under strict COVID-19 measures. There is concern in the Western Highlands province that two people have travelled into Hegen without being quarantined. 50 health care workers in the National Capital District will receive two days of COVID-19 case investigation training to assist in collection and analysis of samples. Finally in PNG this week, a social media post claiming to announce a COVID-19 lockdown in Sandaun province has been described as fake. Pandemic Controller David Manning has said that the origin of the post will be investigated.

Vanuatu has recorded its first case of COVID-19 this week. The case was detected in quarantine and was an asymptomatic individual who had returned from the United States. The individual returned their first positive test result on day five of quarantine. Stricter quarantine rules have been instituted in response to the positive result, with the period of quarantine for citizens increasing from 14 to 28 days. Domestic travel to Efate has been halted as a precaution.

The first repatriation journey has arrived in Tokelau since the outbreak of the pandemic, with a handful of Tokelau residents able to return home from Samoa. Tokelau closed its borders on 21 March. Also making news in repatriation efforts, the Niue opposition has criticised steps taken by the government to increase repatriation journeys from New Zealand. The opposition has labelled the scaled-up repatriation and a move to allow home quarantine – rather than in a facility – “unprofessional and irresponsible”.

Amidst increasing cases in French Polynesia, the opposition party has levelled blame at President Firtch for what it has labelled “disastrous management” of the COVID-19 pandemic. The opposition has called for rapid testing of the entire population. Also in the French Pacific, a second case has been detected in Wallis and Futuna. The COVID-19 positive individual arrived from France in late October and was diagnosed at the end of their compulsory quarantine period. The asymptomatic individual has been transferred to isolation. France has suspended flights from Paris to French Polynesia.

Three crew members on board a container vessel, which has docked in Pago Pago in American Samoa, have returned positive test results for COVID-19. A COVID-19 safe plan has been devised to allow for the ship to offload its cargo.

Finally, research published by the Australian Centre for International Agricultural Research (ACIAR) has shown that the COVID-19 pandemic is exacerbating existing threats to food security in the Asia-Pacific region.