The Samoan government has tightened restrictions amidst uncertainty over two possible cases of COVID-19 and New Zealand has announced a resumption of its seasonal worker program, Hugh McClure writes.

The spread of COVID-19 in the Pacific Island region has continued this week, with French Polynesia once again recording the largest increase in reported cases, with 14,372 cases and 75 deaths now confirmed. Currently, there are 82 people in hospital and 21 in intensive care. Papua New Guinea (PNG) has recorded 656 cases, with the increase led by a surge of positive cases detected in the West New Britain province. The province has now recorded 51 cases, making it the third most-affected province in the country.

Elsewhere in the region, the number of cases in Fiji has increased to 42 due to scaled-up repatriation efforts. New Caledonia has recorded 33 cases. The Indonesian-controlled Papua and West Papua provinces have recorded 10,014 cases and 5,276 cases respectively. Further afield, the number of cases in Guam has reached 6,722 with 112 deaths, there have been 106 cases in the Northern Mariana Islands, and Wallis and Futuna has now recorded 3 cases. Case numbers are unchanged in Solomon Islands (17), Vanuatu (1), Marshall Islands (4), and American Samoa (3).

Here is a snapshot of policy responses to COVID-19 in the Pacific region, correct as of 12pm AEST, 1 December 2020. 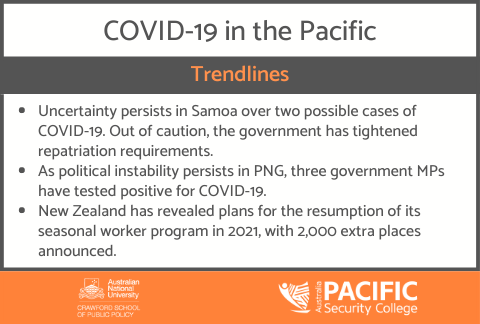 Uncertainty persists in Samoa. Some sources have reported that the country has recorded its first COVID-19 cases through repatriation. Samoan Prime Minister Tuila’epa Sailele Malielegaoi declared that a 23-year-old sailor recorded a positive case on his left nostril and a negative case on his right nostril, while a 70-year-old Samoan citizen who travelled to Apia from Melbourne has also recorded a positive test result. In response, Samoa has imposed strict measures for returning citizens on upcoming repatriation flights from New Zealand and Fiji. The prime minister has said that entry to Samoa will only be approved for returning citizens and scholarship students, with flights from the United States suspended.

The increase in cases in Papua New Guinea comes amidst continued political instability in the country. Three MPs have now recorded positive test results for COVID-19. As case numbers continue to rise, the Asian Development Bank has approved a $1.25 billion loan to help finance the PNG government’s response to the pandemic.

The Solomon Islands prime minister has this week sought to reassure his community that a new multi-purpose field hospital in the country, which came online on 27 November, poses no risk to residents. Reflective of the continued food security concerns which have been brought to prominence due to the way in which the pandemic response has affected trading flows, the Solomon Islands government is extending its vegetable seeds and farming tools distribution program to more provinces. The program began in June through the COVID-19 Livelihood Sector support scheme. The program is supported by the Australian government in partnership with the United Nations Development Programme.

Pacific Trade Invest Australia recently released its Pacific Business Monitor. The report showed that the three leading challenges facing the Fijian business economy include poor cashflow, the impact of closed international borders, and uncertainty about how long the pandemic will last.

New Zealand has announced plans for the resumption of its seasonal worker program in 2021. Under the program, workers will be paid a living wage of $22 per hour. The New Zealand government has announced places for an additional 2,000 workers in the new year.

Finally, the European Union has provided $35.7 million to support the health response in the Pacific and Timor-Leste through the Health Support in Response to COVID-19 in the Pacific program.