Lockdown restrictions are being lifted in parts of Fiji, while there are fears vaccines supplied to Papua New Guinea by Australia may expire before they are administered, Hugh McClure writes.

The Suva-Nausori Corridor lockdown has been lifted this week, with the capital region again divided into two containment zones. The easing of restrictions came despite four new cases being detected in Nausori on Tuesday 18 May. Fiji has so far recorded 178 cases and 4 deaths, with 55 cases currently active in the country.

Testing has increased significantly in Fiji, with 2,500 tests conducted in the 24 hours to 19 May, and 11,000 swabs awaiting processing. As a result of contact tracing, there are currently 7,888 contacts in Suva and Nausori under quarantine. 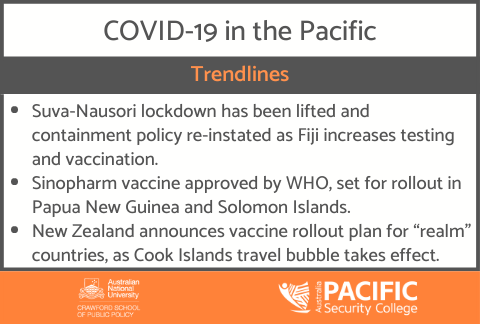 The impacts of the strict Suva-Nausori Lockdown are being felt across Fiji this fortnight. With hundreds of thousands of Fijians either under a strict lockdown or containment restrictions, the need for social assistance has been great.

Around 118,000 households have been assisted through the government’s $57 relief payments, while ration packs have been delivered widely across the Suva-Nausori corridor. The Fiji National Provident Fund has brought forward applications for financial assistance, while early payments of $139 were issued to 37,000 members ahead of the lockdown.

With incomes scarce, there have been reports of a return to barter systems across Fiji, as households rely on subsistence trading practices to make ends meet. Food prices have increased across the country, while market vendors have reported a sharp decline in sales.

As the health ministry attempts to trace and contain the virus, those living in informal settlements have been identified as being at increased risk. Mental health support for frontline workers and those suffering ongoing mental illnesses has also been flagged as being of particular concern during the lockdown and containment policies.

Alarming analysis released this fortnight reveals that more than half of the new cases reported in PNG on May 13 were from tests conducted a week prior, reflective of the ongoing delays in processing test samples and reporting results in the country. Such delays hamstring the government’s ability to track and isolate cases and their contacts.

Restrictions have been eased in PNG this fortnight, with limits on churches, community organisations and businesses all being relaxed. Congregations may now have up to 100 people in attendance.

A cultural basis for development in Solomon Islands

There is concern that lengthy delays in vaccine administration in PNG may result in substantial vaccine wastage. Experts have cautioned that if the vaccines donated to PNG by Australia in March are not used this month, they will have to be disposed of.

The WHO’s decision to approve the Chinese-made Sinopharm vaccine this fortnight is predicted to have a significant impact on vaccine stocks, particularly in PNG and Solomon Islands. China has offered 200,000 doses to PNG, while 50,000 have already arrived in the Solomon Islands.

PNG Health Minister Jelta Wong has allowed the Sinophharm vaccine in PNG, for those who do not want to receive the AstraZeneca vaccine, while Solomon Islands Health Ministry Permanent Secretary Pauline McNeil said it does not matter where the vaccine is made, provided it is safe.

Samoan authorities revealed that the country’s borders are likely to remain closed for the rest of the year, stating that the country will need to achieve a 98 per cent vaccination rate before borders are reopened. This is despite the fact that Samoa has only secured enough vaccines to inoculate 40,000 people this year, well below a 98 per cent target. Seven per cent of Samoans have received their first dose.

New Zealand has released details for vaccine rollouts in ‘realm’ countries. Vaccine administration began in the Cook Islands on 18 May, with Prime Minister Mark Brown saying that New Zealand had provided sufficient Pfizer vaccines to cover the entire adult population. It is expected that the rollout will take six to eight weeks in the Cook Islands before moving to Niue and Tokelau.

New Zealand is providing technical assistance and logistics and planning support to the Cook Islands, Niue and Tokelau.

n other vaccine news this fortnight, Vanuatu, which has not yet begun administering vaccines, has ordered doses from Italy and South Korea. Tonga has received an additional shipment of 19,000 doses from New Zealand. 72 per cent of Tonga’s first 24,000 vaccines delivered in March have been administered. Nauru’s vaccine rollout has exceeded government expectations, with 108 per cent of the 2019 census adult population having now received a vaccine.

Briefly this week; the Cook Islands has welcomed its first planeload of tourists from New Zealand; State of Emergency procedures have been extended in both Samoa and Tonga; French Polynesia has gone 24 hours without recording a new case of COVID-19 for the first time since July 2020; and New Zealand has increased caps on international workers allowed into the country for horticultural work, with Pacific Islanders predicted to be the main beneficiaries.