The Indonesian provinces of Papua and West Papua continue to be the Pacific region’s COVID-19 hotspots this week, Hugh McClure writes. 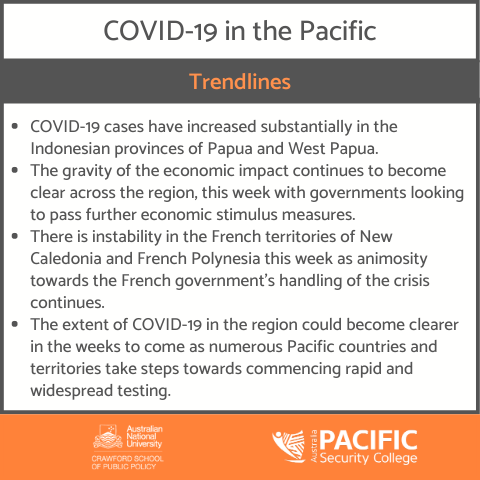 Whilst new, confirmed cases of COVID-19 across the Pacific region have been minimal this week, the substantial growth of cases in the Indonesian provinces of Papua and West Papua presents serious concerns for the region as it manages the pandemic.

The increase of 128 cases in Papua province this week, in addition to 35 additional cases in West Papua, continues to be a worrying trend for officials in Papua New Guinea (PNG), which shares the region’s only international land border with the Papua province of Indonesia. Whilst PNG Prime Minister James Marape flagged this week his belief that the country’s State of Emergency will be lifted on 2 June, the State of Emergency Controller has cautioned against complacency, arguing that the country is not out of danger.

The gravity of the economic shock which has been caused by travel restrictions and other lockdown procedures has become increasingly clear this week.

The governor of the Solomon Islands Central Bank has forecasted that economic growth will fall by five per cent, resulting in a recession for the second quarter of 2020. Over the medium-term, growth is expected to return to an average of three and a half per cent as infrastructure and development stimulus measures come online.

Meanwhile, economic stimulus measures were passed by the PNG government this week and Fiji Prime Minister Frank Bainimarama has indicated that a second economic stimulus package will be considered for later this month.

Elsewhere, New Zealand has announced that its aid budget will be lifted by $55 million, with much of the additional funds directed toward COVID-19 measures in the Pacific. This announcement was made alongside a commitment to provide $195 million in support to Pacific peoples living in New Zealand and respond to the economic downturn, including through skills and employment initiatives.

In Fiji, one of the nations most heavily dependent on tourism in the region, visitor arrival figures for the month of April revealed the scale of the economic shock the country has experienced. In April 2020, just 678 visitors arrived in the country, down from 76,813 in April 2019.

Instability has continued in the French Pacific territories of New Caledonia and French Polynesia this week. In New Caledonia, where rallies have resumed at airports, 62 French military personnel arrived on the evening of 18 May and subsequently bypassed customs, immigrations, and health checkpoints. These actions came despite the territory’s ongoing mandatory 14-day quarantine in a government-operated hotel, followed by a further seven days in self-isolation.

In response, pro-independence party president Daniel Goa argued that France has failed to respect the Noumea Accord and requested the French High Commissioner to leave the country.

Meanwhile in French Polynesia, the territory-wide curfew has been lifted, while the Administrative Court has ruled hotel-based quarantines illegal. Anger persists regarding the rotation of French officials into French Polynesia.

The scaling up of testing in the region in the weeks to come will shed light on whether fears of unreported COVID-19 transmission in the Pacific have basis. Substantial shipments of testing facilities have now reached many Pacific Island countries and territories, with Vanuatu having received their first two shipments of 8,000 requested testing kits. Elsewhere, American Samoa has requested 25,000 testing kits. Many other countries, including Fiji have committed to increasing testing.