Papua New Guinea’s health system is being overwhelmed as positive cases in the country skyrocket, while Fiji has begun opening up to international travel, Hugh McClure writes.

COVID-19 case numbers across the Pacific have broadly stayed stable this past fortnight with the exception of Papua New Guinea (PNG), where numbers continue to rise significantly. Here is a snapshot of policy responses to COVID-19 in the Pacific region, correct as of 12pm AEDT, 20 October 2021.

World Vision has appealed for a once-in-a-lifetime multinational effort to rebuild Pacific livelihoods in the aftermath of the pandemic. The organisation released their Pacific Aftershocks report, which reveals the results of a household survey across the Pacific. The survey shows that although case numbers have been minimal in the Pacific, the economic toll is great, and the region trails other parts of the globe such as the Caribbean in its economic rebound. 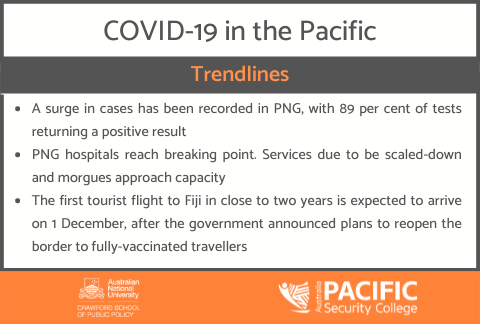 A boom in demand for travel to Fiji has been recorded, after the country announced it would allow quarantine-free travel for fully-vaccinated tourists from selected countries, including Australia and New Zealand from 11 November.

The first scheduled tourism flight on Fiji Airways is set to arrive on 1 December. Visitors must produce a negative COVID-19 test three days before arrival, and undergo rapid testing upon arrival, before undergoing a two-day hotel confinement.

Mandatory vaccination laws due to be introduced into French Polynesia’s parliament this week will be delayed until December. This follows weeks of protests in the territory.

Meanwhile, Tonga’s vaccine drive will be expanded, after the shipment of more than 30,000 Pfizer doses from New Zealand to the kingdom, which have been earmarked for those aged 12 to 17, as well as pregnant women. Samoa will return many of its 100,000 unused vaccine doses before they expire. This is despite 60,000 people in the country still being yet to receive their second inoculation.

As Australia prepares to suspend domestic manufacturing of the AstraZeneca vaccine after the current contract expires, there is concern about the impact that this will have for vaccine access in the Pacific Island region. Australia has committed to providing millions of AstraZeneca doses to the region, and some hoped that ongoing manufacturing of the vaccine in Australia would continue to support its neighbours.

In the wake of New Caledonia’s devastating COVID-19 outbreak, France’s overseas minister Sebastien Lecornu has committed to “long-term” medical and financial assistance to the territory.

The Delta strain outbreak continued to surge across PNG this fortnight. 3,991 cases have been recorded in PNG in the past two weeks, bringing the country’s total to 25,356 cases and 312 deaths.

New Caledonia’s deadly outbreak continues. 1,928 cases have been recorded over the past two weeks, bringing its total to 10,070 cases and 242 deaths.

Health authorities report that this current outbreak is the most severe wave of COVID-19 to reach PNG to date. The test positivity rate has reportedly increased from 35 per cent to 89 per cent during the month of October.

This indicates that the virus is circulating heavily through the community, and that true infection numbers are far greater than reported. By way of comparison, a positivity rate above five per cent is regarded as “out-of-control” by the World Health Organization (WHO). Prime Minister James Marape has reportedly blamed complacency from provincial authorities for the current situation in PNG.

The country’s health system is under considerable pressure, with Health Minister Jelta Wong saying the nation’s health infrastructure has been pushed to the brink. Hospitals in PNG are at capacity. The Goroka Provincial Hospital is overwhelmed with cases, while the Angau General Hospital in Lae is utilising the town stadium as a makeshift hospital and morgue.

The Mount Hagen General Hospital may close in the foreseeable future, due to an influx of COVID-19 patients and an acute shortage of funding. Port Moresby General has announced it will be scaling-down services due to a surge in COVID-19 patients. In response, the WHO has said PNG hospitals desperately require international assistance. The Australian Government has sent health workers and additional oxygen concentrators in support.

Reflective of the high death toll, funeral homes in Goroka and Lae will no longer receive the bodies of those who have died from COVID-19, while morgues are overflowing.

Health workers have noted an uptick in people seeking vaccinations as the situation deteriorates in the country. Health Minister Wong released a statement saying that none of the country’s recent deaths have been amongst vaccinated people, hoping to drive an increase in people coming forward for vaccination. Pandemic Controller David Manning announced a goal to vaccinate 1.9 million people by the end of 2021. The United States Government also launched a mobile COVID-19 vaccine drive in Port Moresby.

dditionally, provincial governments now have the ability to declare curfews. Police have said a two-week lockdown of Mt Hagen in the highlands is to limit the spread of the virus. A curfew and other restrictions on inter-provincial travel have also been imposed. Western Highlands Governor and former Prime Minister Paias Wingti said the country is sitting on a ‘time bomb’ of cases.

The Australian Strategic Policy Institute this month released a piece on the COVID-19 toll in PNG, while PNG’s National Research Institute analysed why vaccine hesitancy is so high in urban parts of the country. A piece in The Conversation compared PNG and Fiji’s delta outbreaks to understand why vaccine rollout surged in Fiji, while it stagnated in PNG.