The government of French Polynesia has refused to close schools despite surging numbers of COVID-19 cases, whilst Fiji has extended financial relief to pension fund members, Hugh McClure writes.

The COVID-19 pandemic continues to worsen in Papua New Guinea (PNG) this week which now reports 581 confirmed cases of the virus. A cluster of 10 cases has been detected in Western Province, while Enga Province has reported its first confirmed case of the virus.

Across the region the total number of cases since the outbreak of the pandemic has risen to 3,797 in French Polynesia, with 14 deaths reported. Guam has confirmed additional cases this week with 3,664 cases and 66 deaths, the Northern Mariana Islands has confirmed a slight increase to 86 cases and two deaths, and the Solomon Islands has reported an additional case bringing its total to three. Wallis and Futuna has recorded its first case of COVID-19 this week. The case was detected from an individual during their 14-day isolation period, and has since been moved to an isolation ward. No new cases were reported in Fiji or New Caledonia. In Indonesian-controlled Papua Province 8,239 cases have been confirmed with 3,626 cases now identified in West Papua Province.

Here is a snapshot of policy responses to COVID-19 in the Pacific region, correct as of 12pm AEST, 20 October 2020. 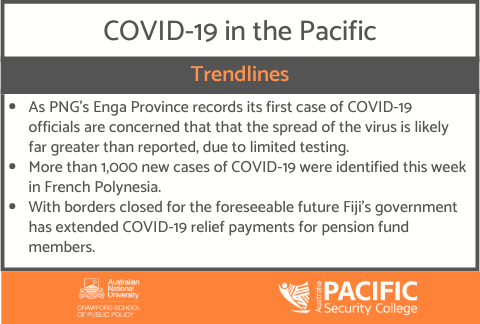 PNG’s incoming Health Minister has said that his country’s attention should be directed toward the Western Province and Port Moresby, as COVID-19 continues to spike in these two critical parts of the country. The confirmation of a cluster of 10 asymptomatic cases in Western Province has worried policymakers and health officials, highlighting it is likely that the true rate of COVID-19 in PNG is far greater than what has been reported due to low testing rates.

The World Health Organisation has joined the conversation predicting that the number of cases in the National Capital District and Western Province are likely far greater than official reports have confirmed.

As case numbers continue to grow, there are concerns that the French Polynesian government is giving up on trying to control the spread of COVID-19. More than a thousand additional cases were detected this week alone. Amongst the new cases confirmed this week is an outbreak within a boarding school. Despite more than 20 students at the school in Taone testing positive the Education Ministry has refused to close the school.

Fiji’s government has extended COVID-19 relief payments for pension fund members, with members eligible to withdraw between USD $47 and USD $518. As borders are almost certain to remain closed for the foreseeable future, the need for assistance has been identified as being far from over. The National Provident Fund has released data that reveals 50,000 people are continuing to access assistance.

Briefly, Samoa’s government has approved the first repatriation flight for citizens stranded in Europe and the US. Five flights have been approved from Los Angeles, beginning in October. Meanwhile, more than 1300 Samoans have registered for five repatriation flights scheduled to journey from New Zealand in the coming weeks.

Finally, the Cook Islands has become the eighth Pacific state to ratify the PACER Plus Agreement this week, meaning that the regional agreement will come into force in 60 days. Australia’s Minister for International Development and the Pacific, Alex Hawke, has welcomed the ratification, saying that the Agreement will support Pacific partners work to recover from the economic impact of the COVID-19 pandemic. Pacer Plus will be accompanied by AUS $19 million from Australia to support countries’ implementation of the Agreement.