With COVID-19 continuing to spread in the Pacific, the region is facing coordination challenges as an increasing number of security partners play a role in managing the pandemic, Hugh McClure writes.

Confirmed COVID-19 cases in Papua New Guinea (PNG) have jumped to seven, up from two this time a week ago. Elsewhere in the region, Fiji has reported 18 confirmed cases, Guam has reported 136, French Polynesia 55, New Caledonia 18, and the Commonwealth of the Northern Mariana Islands reports 14 confirmed cases. 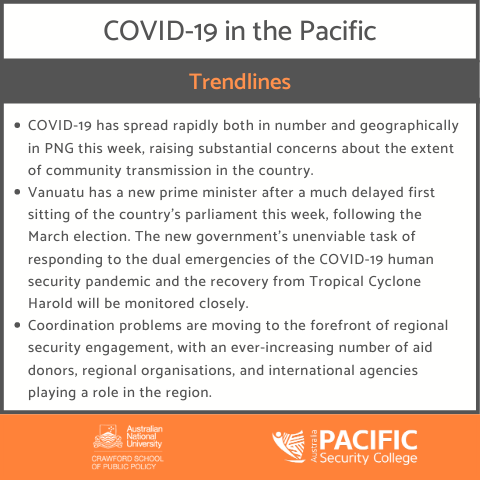 The confirmed incidence of COVID-19 has grown rapidly in PNG this week, with the total confirmed number of cases in the country jumping from two to seven. Positive cases have now been reported in three provinces – Western Province, East New Britain, and the National Capital District – despite internal travel having been banned since the State of Emergency was declared.

There is substantial concern regarding not just the level of unreported COVID-19 cases in the community, but also the degree of community transmission which is occurring.

Moreover, with three of the positive cases from the Western Province identified as frequent border-crossers, there is mounting concern about the number of people continuing to move across the closed-border, particularly as Indonesia now reports the greatest number of reported COVID-19 cases in Asia aside from China.

The incidence of community transmission highlights the need for widespread testing in PNG. With the testing lab at the PNG Institute of Medical Research closed last week, the country is once-again reliant on sending samples to Australia for testing, further complicating the country’s response.

The significant coordination problems facing the region in the months ahead have become increasingly apparent this week, as an increasing number of security partners begin to respond to the COVID-19 human security pandemic in the Pacific.

The World Bank has outlined assistance for a number of countries including PNG, Kiribati, Palau, Samoa, Federated States of Micronesia (FSM), and Republic of the Marshall Islands (RMI), with more support anticipated before the end of the month. Similarly, the Asian Development Bank has outlined support for Tonga and Samoa, as well as FSM, RMI, Nauru, and Tuvalu. Meanwhile the UN has included six Pacific countries – Kiribati, Tuvalu, Vanuatu, Tokelau, and the Solomon Islands – as being eligible for the UN COVID-19 Response and Recovery Fund.

Donor countries and regional organisations continue to play a role in the response. Amidst this increased engagement from a range of external stakeholders, effective policy creation and coordination to address the range of security threats facing the region will increase in importance.