Papua New Guinea is looking to ease travel restrictions and New Zealand’s first repatriation flight to Samoa since COVID-19 remerged in Auckland touched down this week, with 300 seasonal workers on board, writes Hugh McClure.

COVID-19 cases continue to rise in affected Pacific island countries. There has been modest growth in confirmed cases in Papua New Guinea (PNG), with 11 new cases bringing the total to 527 infections and seven deaths. In the neighbouring province of Papua in Indonesia, 5,176 cases have been confirmed, with 1,516 cases also reported in West Papua province. The total number of cases has reached 2,147 in Guam, 69 in the Northern Mariana Islands, and 1,353 in French Polynesia.

Here is a snapshot of policy responses to COVID-19 in the Pacific region, correct as of 12pm AEST, 22 September 2020.

PNG’s Pandemic Controller David Manning has implored citizens to come forward for COVID-19 testing, stating that the 22,000 tests conducted to-date in the country are insufficient to gauge the extent of the outbreak in the country. 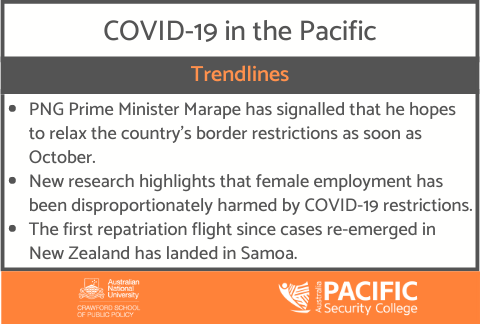 PNG Prime Minister Marape signalled his intent to loosen travel restrictions as early as October, indicating his desire to see greater tourism and business flows into the country. Treasurer Ling-Stuckey revealed that he is in discussions with Australian authorities about resuming labour mobility programs.

Women-led businesses in the Pacific are in urgent need of support due to the COVID-19 pandemic, according to the head of the Pacific Trade and Investment Commission, Caleb Jarvis. Jarvis said that women are disproportionately affected by the border closures due to the reduction in tourism and services. A survey revealed that 92 per cent of women entrepreneurship had suffered a drop in revenue.

The first repatriation flight to touch-down in Samoa since COVID-19 re-emerged in New Zealand arrived this week. 300 Samoan seasonal workers were on board the flight. It has also been reported that border closures have delayed the repatriation of Samoan police officers currently serving on peacekeeping operations with the United Nations in Africa.

In Guam, which has been under lockdown for a month, the stay-at-home order has been extended, albeit with a slight loosening of some restrictions. Non-essential curbside vendors may trade, and takeaway restaurants are also allowed to operate.

With COVID-19 cases continuing to rise in French Polynesia, social gatherings have been limited to no more than 10 people. This comes despite authorities repeatedly ruling out imposing restrictions. Absenteeism in French Polynesian schools is estimated to be around one in six, with many parents opting to keep their children home from school due to concerns about the virus.

Save the Children has made a submission to the Australian Parliament’s Committee on Defence, Foreign Affairs and Trade, in which it urged the Australian government to help establish a social safety net for Pacific families left without income due to reduced work and remittances. Pointing to research conducted by the charity showing that poverty could rise to 30 per cent in PNG and 27 per cent in the Solomon Islands, the charity’s Deputy CEO in Australia, Mat Tinkler, has urged the Australian to partner with Pacific governments and international donors to develop a ‘Pacific Jobkeeper’ program.