COVID-19 cases have increased in a number of Pacific countries, whilst Fiji looks to revive its tourism industry. Hugh McClure writes. 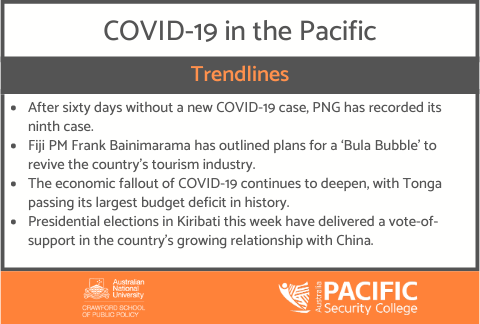 he news which many across the region had long-feared came this week that a positive COVID-19 case has been detected in PNG. The case was confirmed on the weekend to be a 44-year-old Australian man who has been in PNG since January on an ADF posting. He first reported respiratory illnesses on June 9, and has since followed strict social distancing guidelines. However, as his social distancing falls within the three-week potential incubation period, there is concern that he may have come into contact with people prior to entering quarantine. So far, eight further people have been placed in quarantine.

The case comes less than a week after the country’s State of Emergency expired, and has prompted Health Officials to caution the public that the case highlights why it is important to not be complacent about the risk of COVID-19 in PNG.

The legislation which replaced it, the National Health Emergency Act 2020, has been criticised this week by anti-corruption agency Transparency International PNG, with critics claiming that it restricts citizens’ rights for an indefinite period with no parliamentary oversight.

Fiji Prime Minister Frank Bainimarama announced his hopes over the weekend for a ‘Bula Bubble’ to revive Fiji’s tourism industry by accepting arrivals from Australia, New Zealand, Tuvalu, Kiribati and Tonga. The plan comes as the Fiji Government declares that it has eradicated COVID-19 from the country and would see tourism areas zoned for visitor arrivals who match similar COVID-19 risk and exposure profiles. The plan comes as ratings agency Standard and Poors reported that the COVID-19 pandemic has triggered a sharp collapse in tax revenue, saying that the negative outlook reflects uncertainty surrounding Fiji’s tourism industry.

It has said that their rating could be revised up or down depending on how quickly tourism recommences in the country. Elsewhere in the region, the Commonwealth of the Northern Mariana Islands (CNMI) government says that the biggest roadblock to a successful recommencement of tourist travel, scheduled for July, is the hurdle that quarantine protocols place on attracting tourists. CNMI has this week moved to offer quarantine exemptions provided that arrivals register with a monitoring system, consent to specimen collection and prove that they have had a test at least six days prior to arriving. Elsewhere in the region, New Caledonia has shortened its three-week mandatory quarantine period for arrivals to two weeks.

As the financial year draws to a close, the economic impacts of the COVID-19 pandemic are being reported across the region. In Tonga, the 2020-2021 Budget passed the parliament unanimously this week, in what marks the Kingdom’s largest budget deficit on record, totaling US $26.4 million. The Budget signals seven priority areas for Tonga, including; health, illegal-drugs; education; economic development, including agriculture, fisheries and tourism; infrastructure; climate change and public sector reform.

Remittances have also reported to be significantly down in Tonga, adding to the country’s financial pressure. Furthermore, the French Polynesian President has announced that he plans to travel to Paris next month to secure loans of up to US $525 million to finance the economic fallout of the pandemic in French Polynesia. The announcement comes on the back of reports that employees in the tourism sector have missed an estimated US$6 million in wages over the past month. In total, more than 16,000 tourism employees will receive government assistance until December.

Briefly, Teneti Maamau has been re-elected as President of Kiribati this week. Debate surrounding the diplomatic shift from Taiwan to China became the primary dividing issue between the two presidential candidates during the campaign, and as a result, the President’s comfortable re-election appears to cement the country’s burgeoning relationship with China. Elsewhere in the region, discussions have surfaced regarding a proposed Free-Trade Agreement between China and PNG.