Vaccine rollouts continue in the Pacific and a new report shows that the pandemic has accelerated malnutrition among children in the region, Hugh McClure writes.

Papua New Guinea (PNG) has surpassed a grim milestone this fortnight, as the country recorded its 1,000th case of COVID-19. Cases in PNG have increased drastically over the past several days, with the country’s total now reaching 1,056. Concerningly, the spate of new cases has been spread across the country, with cases now detected in 17 of the country’s 22 provinces and districts. Continued low testing means that the true incidence of infection is likely far greater.

Elsewhere in the region, New Caledonia has recorded five cases this fortnight, bringing its total to 55, and a new case this fortnight brings Samoa’s total to four. All other countries and territories have recorded no new cases.

Here is a snapshot of policy responses to COVID-19 in the Pacific region, correct as of 12pm AEDT, 24 February 2020. 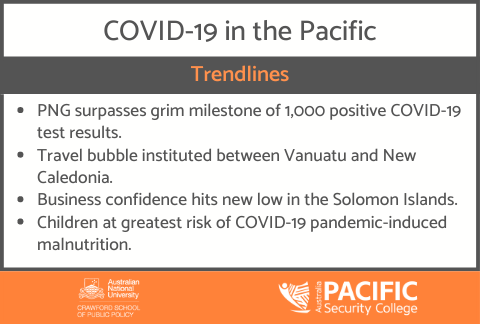 CNMI continues to pursue travel bubbles with its largest tourism markets, South Korea and Japan. In other travel-related news, the president of Kiribati has confirmed that his country’s borders will remain sealed for the foreseeable future, while repatriation between New Zealand and Tonga has been postponed until March.

Home quarantine has been suspended in PNG this fortnight in response to new strains of the virus detected around the world. All arrivals to the country must now quarantine in a hotel or a company site at their own expense. Two PNG government ministers are among the country’s new confirmed cases, as well as Pandemic Controller David Manning. Despite social media speculation, James Marape said he has not tested positive to the virus.

While most leaders are calling for vaccinations to be accelerated in the Pacific Island region, PNG Opposition Leader Belden Namah has bucked the trend. Mr Namah has called on the government to hold-off administering vaccines until a full report has been written on the pandemic’s impact on the country.

Marshall Islands (RMI) has pulled out of the Pacific Regional COVID vaccine program because of the steady stream of vaccines it is already receiving. It anticipates full inoculation of the community by June. Elsewhere in Micronesia, a new order signed by CNMI governor mandates that all government executives must receive the vaccine. Ten per cent of the CNMI population have already received both doses of a vaccine.

The Solomon Islands Chamber of Commerce and Industry has reported that business confidence is at a record low in light of the COVID-19 pandemic. The results of a recent survey indicate that two-thirds of businesses in Solomon Islands do not anticipate an improvement in the national business environment, while 56 per cent expect that government policy and the upcoming March budget will have a negative effect on their business.

The survey indicates that 36 per cent of businesses have laid off staff during the pandemic, while 57 per cent reported a reduction in profits. In anticipation of the March budget being tabled in parliament, the government has unveiled the budget’s theme: ‘towards a path to economic recovery‘.

The report shows that stunting is now evident in 38.4 per cent of Pacific children, higher than Asia, Eastern Africa or Middle Africa. Rates are highest in Nauru, RMI, Solomon Islands, Tuvalu, and Vanuatu.

iji’s Attorney-General and Minister for the Economy Aiyaz Sayed-Khaiyum has said that vaccine passports should be essential for travel to and from Fiji. In an address to the parliament, the minister stated that the nation’s economic recovery will only be witnessed once vaccines have been administered. Prime Minister Bainimarama has said Fiji will receive its ‘fair share’ of vaccines, and that his government is not ‘meekly’ waiting in line, in a move to quash fears that Melanesia is falling behind the global vaccine rollout.

Also making news this week, Solomon Islands authorities have attracted criticism from traditional leaders in Bougainville, who claim that authorities are targeting traditional fishers in border operations. Also, new figures have revealed that 28,000 COVID-19 tests have now been conducted in Fiji, with no positive cases in the community since 18 April 2020.