COVID-19 is running rampant through Papua New Guinea, whilst the vaccine rollout has begun in earnest through much of the Pacific, Hugh McClure writes.

Community transmission continues to spiral out-of-control in Papua New Guinea (PNG). There have now been 4,109 recorded COVID-19 cases confirmed in the country so far – an increase of 1,758 cases in the past week alone – as well as 39 confirmed deaths, including the late Member of Parliament Richard Mendani.

Also of concern are the islands of Wallis and Futuna, which have now recorded 327 cases, almost all of which were recorded since community transmission was first detected earlier this month. The territory recorded its first COVID-19 death this week. Community transmission has also been detected in the Northern Mariana Islands (CNMI) for the first time in 204 days. CNMI’s confirmed COVID-19 case count has now reached 158.

Despite the extension of lockdown, New Caledonia’s spike in cases has continued, with 116 cases now confirmed. 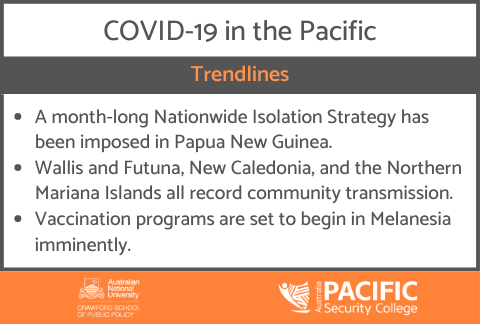 PNG has moved to a month-long ‘nationwide isolation strategy’ this fortnight, as cases in the country have tripled in the past month. Prime Minister Marape said that the strategy is not a ‘stiff lockdown’, but a means to reduce unnecessary travel around the country and allow health authorities to take stock of the pandemic. Pubs, clubs, gaming sites, and schools have closed, with bans imposed on large gatherings and mask mandates imposed.

Chief Emergency Physician at Port Moresby General Hospital, Dr Sam Yockopua called on the public to take heed of the measures, labelling the COVID-19 situation a “ticking time bomb”. The virus has now been recorded in all but three of PNG’s 22 provinces. The Ok Tedi Mine has also suspended operations for a fortnight.

The escalating pandemic in PNG is having serious ramifications for the country’s health infrastructure. The Angau Hospital in Lae, the country’s second-largest city, has been forced to suspend operations due to the COVID-19 surge, while many other hospitals in the country have scaled-down operations.

Concerning reports of patients being treated on the floor highlight the lack of investment in health infrastructure at Port Moresby General Hospital, while the National Capital District (NCD) Health Authority CEO said the District is facing critical staffing shortages due to health workers testing positive for the virus in increasing numbers.

A group of Australian Medical Assistance Team (AUSMAT) health specialists with an emergency supply of 8,000 AstraZeneca vaccines has arrived in PNG to assist with the escalating situation in the country. New Zealand has also sent eight tonnes of personal protective equipment (PPE) to PNG.

With 10 per cent of the workforce at Port Moresby General Hospital now testing positive to COVID-19, all frontline health workers are being encouraged to receive a vaccination. Australia has asked the European Union (EU) to release one million vaccine doses for PNG. The country hopes to commence its vaccination program by the weekend.

A major complication for the vaccine rollout is the ongoing prevalence of misinformation circulating on social media questioning the safety of the vaccine. PNG Justice Minister Bryan Kramer has said that he will take the vaccine to help dismiss misinformation.

The situation is potentially gravest in rural parts of the country, as the virus continues to spread through the provinces. New data reveals that there are just two respirators for 300,000 people in Milne Bay Province, highlighting the limited health services in that part of the country.

There has been an explosion of cases in one of the least populated parts of the Pacific Islands region this fortnight. Wallis and Futuna, home to just 12,000 people, has now recorded 338 cases. The territory’s lockdown has been extended until 6 April, while a vaccination campaign is now underway after 18,000 doses and 72 healthcare personnel arrived from France.

Similarly, New Caledonia’s lockdown has also been extended until 28 March, as the territory records a further spike in cases as the result of community transmission.

The Solomon Islands vaccination drive is slated to begin this week after 24,000 doses of AstraZeneca arrived in the country through the COVID-19 Vaccines Global Access (COVAX) facility. Vaccines will be provided in Honiara in the first instance. Vaccinations are continuing in Micronesia, where vaccines have now been made available to all people on Saipan aged over 16.

Briefly this week, the State of Emergency has been extended in Tonga; new figures reveal that 1,167 ni-Vanuatu Seasonal Workers have travelled to New Zealand so far this year; Palau has announced plans to open a travel bubble with Taiwan from 1 April; and Samoa has refused entry to students from Vanuatu, citing that they had not been tested for COVID-19.