French Polynesia is once again the Pacific Island region’s COVID-19 epicentre. Cumulative COVID-19 case numbers recorded in French Polynesia have doubled this month, reaching 39,117 cases and 311 deaths. Most cases have been recorded in Tahiti, however, the virus has reached many outer islands.

More than half of French Polynesia’s total COVID-19 related deaths since the outbreak began, and more case numbers than in all of 2020, have been recorded in the past month.

Daily case numbers in Fiji are beginning to trend downwards, with the seven-day average now 514, though there are fears that reduced testing rates may be distorting this figure. 44,188 cases and 444 deaths have now been recorded in Fiji. 17,947 cases and 192 deaths have been recorded in Papua New Guinea (PNG).

Here is a snapshot of policy responses to COVID-19 in the Pacific region, correct as of 12pm AEST, 25 August 2021. 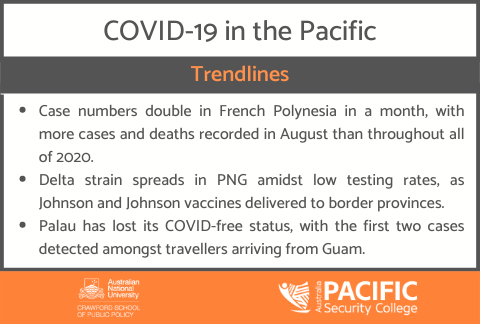 here are concerns that PNG is ‘sleepwalking’ through the pandemic, after testing rates have been scaled-down. While health workers in major cities report fewer COVID-19 hospital admissions, and report the Port Moresby’s health workforce has recovered to similar levels as before the March outbreak, information from regional areas remains scarce.

Health expert Glen Mola said health authorities have little handle on how many people have COVID-19, with just 2,800 tests conducted for all five million people in the Highlands region.

PNG authorities have ordered that corpses undergo tests amid fears of undetected cases, and unreported deaths, across the country. Dr Daoni Eserom, deputy controller of PNG’s national pandemic response, said that a reduction in testing rates since March is cause for concern.

The Delta variant has now been detected at several locations across PNG, with three cases identified in Western Province, and a nurse in Madang Province also testing positive for the variant. There are suggestions that the nurse contracted the virus through individuals who had crossed PNG’s border with Indonesia, where the Delta strain is spreading rapidly. PNG Health Minister Jelta Wong said that the priority is to ensure authorities in the provinces are prepared for the highly-infectious variant.

These single-shot vaccines will be provided to border provinces over the next three weeks, accompanied by a public outreach campaign to counter vaccine hesitancy. AstraZeneca vaccines from Australia have been provided to all provinces, while China continues to provide Sinopharm, predominantly to Chinese nationals.

Pacific Wayfinder: Climate change and the IPCC report through a Pacific lens

Additionally, PNG Health Authorities have issued an order for frontline workers to get vaccinated after six staff at the National Pandemic Control Centre tested positive for the virus. All staff at the Centre are now required to have received a first vaccine dose by 31 August.

COVID-19 cases are increasingly being identified on Fiji’s outer islands, including the western island of Malolo and the southern island of Kadavu, after people allegedly travelled illegally from Viti Levu. With fewer health services available on outer islands, the Health Ministry is developing plans amidst increasing cases, and there are calls for vaccines to be fast-tracked to the outer islands.

Australia-New Zealand Medical Assistance Team workers have reported that unvaccinated Fijians account for almost all severely ill patients in Fiji. There are now 300 people in a critical condition in the nation’s hospitals, 40 per cent of whom are being ventilated or receiving oxygen support. 23,000 active cases are currently in isolation.

Prime Minister Frank Bainimarama has introduced a national vaccine lottery in an effort to incentivise people to receive a vaccine.

Palau lost its virus-free status this fortnight, after two travellers arriving from Guam tested positive. They, and all known contacts, have entered quarantine. The Delta strain was recently detected in Guam.

Widespread testing is underway in Cook Islands as New Zealand enters lockdown. A quarantine-free travel bubble was in place between the Cook Islands and New Zealand. No cases have yet been recorded. The Cook Islands Government reported that 96.7 per cent of its target population are fully-vaccinated.

In the midst of French Polynesia’s deadly spike in infections, the territory’s parliament has made vaccinations mandatory for medical staff, frontline workers, and those deemed vulnerable. Only one-third of the French Polynesian target population is fully-vaccinated.

The Vanuatu Government announced that all travellers to the country must be vaccinated from mid-September. It has also issued an ultimatum to ni-Vanuatu students studying abroad that they must be vaccinated or risk having their scholarships terminated.

Newly-released economic data shows Vanuatu’s economy shrunk less than anticipated due to the pandemic. Gross domestic product has fallen by 2.1 per cent, while government revenue, excluding aid, has fallen by 14 per cent on 2019 levels.

In Solomon Islands, it was announced that there will be a test lockdown in Honiara for 36 hours from 6pm on Sunday 29 August, as the country’s opposition leader said more preparation is required for a potential Delta outbreak. Authorities in the country have reiterated calls for unauthorised border crossings between Bougainville and Western Province to stop.

riefly, Samoa’s Prime Minister, Fiame Naomi Mata’afa, has lifted the polarising Sunday trading ban, instituted by the former government under State of Emergency procedures. Markets in the county may now open for business from 4am until 9am.

Meanwhile, Australia’s first shipment of vaccines to Kiribati has arrived, whilst COVID-19 vaccinations will now be offered to those aged 12-17 in Wallis and Futuna. A travel bubble between Wallis and Futuna and New Caledonia is set to open within a week.