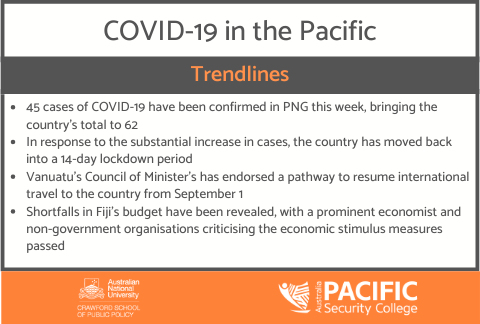 PNG is back in lockdown this week after 45 new cases of COVID-19 were confirmed over the past seven days, bringing the country’s total to 62, up from 17 a week ago. The death of a 35-year-old healthcare worker is being considered as the country’s first COVID-19 death. Lockdown measures include: mandatory mask-wearing; a night-time curfew from 10pm-5am; the banning of friends and family; the closing of schools, universities and colleges for 14-days, as well as night clubs; the cessation of all public motor vehicles excluding taxis; the reintroduction of a 15-person gathering limit; the banning of domestic flights; and the redeployment of non-essential government workers to the National Operations Centre.

There is widespread concern regarding the ability of the country’s medical system to respond to the virus. While testing has increased substantially over the past week – with 1,000 tests conducted – samples are being sent to Brisbane and Singapore for analysis. The Rita Flynn Sporting Complex, which has been used as a quarantine and isolation facility, is nearing capacity, with just 25 beds vacant. While PNG has appealed to the World Health Organization for assistance in the creation of isolation facilities, it will still be some time before this comes online. Some in PNG have questioned the degree of transparency of government spending after health officials appealed for donations and personal protective equipment (PPE). Meanwhile, Australia has confirmed that it will send eight medics for PNG amidst rising case numbers.

Reflecting the strained resources, the Port Moresby General Hospital has reduced services and required all staff and visitors to wear masks. Elective surgery has been cancelled along with some outpatient services. Further afield, PNG’s provincial hospitals have been put on high-alert for an increase in case numbers. In response to the increase in cases in PNG, Bougainville has tightened monitoring and surveillance at entry points to the Autonomous Region.

Elsewhere in the region there has been an increase in cases in Guam, which has now recorded 346 cases. Also in Micronesia, the confirmed number of cases in the Northern Mariana Islands has risen from 37 to 40 following the arrival of passengers from nearby Guam. This increase comes after the Commonwealth’s decision to discontinue self-quarantine procedures for arriving passengers, instead opting for mandatory testing of arrivals on their first and fifth day in the country.

Vanuatu’s Council of Ministers (CoM) have endorsed a roadmap back to international travel this week. The CoM has approved a plan to reopen borders on 1 September through a ‘Tamtam Travel Bubble’. The Bubble would welcome both people and goods to Vanuatu from countries which have recorded no new cases of COVID-19 in the past 30 days. In the meantime, New Caledonia has extended its border closure for a further three months, while New Zealand and the Cook Islands have further delayed announcing plans for an ‘Air Bridge’ between the two countries.

A University of the South Pacific economist said that the Fiji Government’s budget handed down last week should have done more to diversify the country’s economy. Dr Naleesh Gounder highlighted that the COVID-19 pandemic has highlighted the risk of Fiji’s narrow economic base and reliance on tourism, arguing that now is an opportune time to develop alternate industries. Similarly, in the aftermath of last week’s budget, non-government organisations including the Foundation for Rural Integrated Enterprises Development (FRIEND) and the Council of Social Services have made clear their disappointment with the budget.

FRIEND has said that those engaged in the informal economy were left largely ignored by the government’s stimulus package, while the Council of Social Services has said that the government does not have the balance right. The Council have argued that the government is focussed more on supporting businesses and is not appropriately assisting families to make ends meet. Meanwhile in other budget-related news, the French Polynesian Assembly has voted to approve an updated budget which takes into account the revenue shortfall of $50 million experienced in the territory.

Briefly, the Solomon Islands parliament will sit this week to vote to extend the country’s State of Public Emergency for a further four months after it expired on 24 July.