Papua New Guinea’s opposition leader is putting pressure on the government to lift restrictions, whilst newly released analysis has predicted French Polynesia to be on track for 100,000 COVID-19 cases by year-end, writes Hugh McClure.

Here is a snapshot of policy responses to COVID-19 in the Pacific region, correct as of 12pm AEST, 29 September 2020. 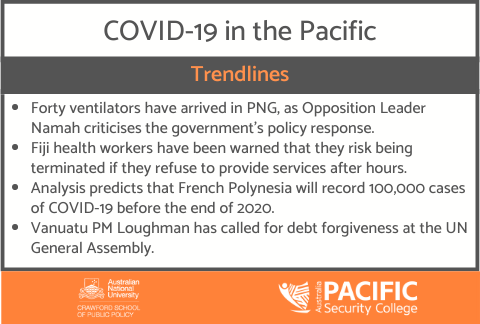 PNG has now recorded 534 COVID-19 cases, with the majority of cases being male, likely due to employment clusters. Health infrastructure has been in the spotlight this week, with the health minister stating that the country is low on test kits, despite Pandemic Controller David Manning encouraging more widespread testing. 40 ventilators have arrived in PNG and will be donated across a number of provinces: Port Moresby General Hospital (13), Nonga Hospital (5), Angua (5), Mt Hagen (5), Goroka (3), Modilon (3), while 1 will be provided for Vanimo, Wewak, Daru, Tari, Kavieng and Kerema.

Opposition Leader Namah has this week called on the government to remove all COVID-19 restrictions, citing that the restrictions are crippling the nation’s economies and claiming that most deaths in PNG are due to comorbidities.

The political situation in the neighbouring Indonesian provinces of Papua and West Papua continues to heat-up this week. There have been mass arrests in the Nabire regency in West Papua following protests against an extension of the Special Autonomy Laws. United Liberation Front demonstrators are calling for a referendum on independence. Hundreds of peaceful protestors at universities and on the streets have been arrested, with Indonesian authorities citing COVID-19 restrictions. Papua province has so far recorded 5,999 cases while 2,054 cases have been recorded in West Papua province.

Fiji health workers have been warned that they risk termination of employment if they refuse to provide medical services after hours. This comes after the government made changes in the 2020-21 National Budget to the way in which it renumerates overtime. Instead of overtime payments being made to workers, they will instead be offered time-in-lieu.

Also making news in Fiji this week, University of the South Pacific Disaster Risk Management Supervisor Viliamu Lese has claimed that there has been a reduction in unemployment in Fiji during the COVID-19 pandemic, due to people leaving urban areas and returning to villages to garden and engage in subsistence agriculture.

With the 75th United Nations General Assembly meeting this week, Vanuatu Prime Minister Bob Loughman has taken the opportunity to call for debt forgiveness for developing nations. Prime Minister Loughman stressed the need for the international community to work collaboratively to overcome the unprecedented challenges posed by the COVID-19 pandemic, including to national budgets.

Briefly, the total number of cases in Guam has reached 2,390 with 46 deaths, while 70 cases have now been confirmed in the Northern Mariana Islands.