Tonga has recorded its first-ever case of COVID-19, while Vanuatu has recorded two cases this fortnight – the first cases in the country since March. All three cases in Tonga and Vanuatu came through repatriation, were identified at border checkpoints, and kept in quarantine.

Here is a snapshot of policy responses to COVID-19 in the Pacific region, correct as of 12pm AEDT, 3 November 2021. 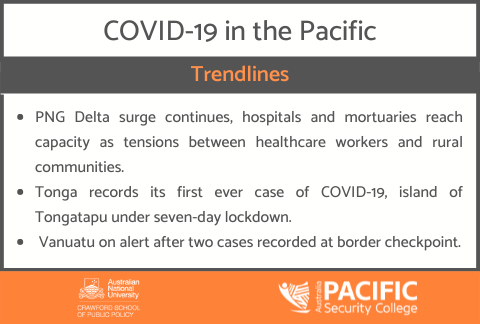 A national lockdown is the only way to contain the current outbreak, PNG national health board chair Mathias Sapuri claimed this fortnight. 99 per cent of COVID-19 cases currently admitted to hospital in the country are unvaccinated, with hospitals in Port Moresby, Lae, Mt Hagen and Goroka all at capacity.

Prime Minister Marape has pleaded with the community to come forward for vaccination, with rates remaining low at three per cent. Of increasing concern are reports of fake vaccination cards being sold and distributed in PNG. Moreover, vaccination hostilities are continuing, with mob attacks against vaccination teams becoming increasingly frequent.

Health staff in multiple cities, including Lae, have become targets of attacks, including stone-throwing, verbal abuse and threats. With the medical fraternity under strain, the government has asked recent graduates and retired health professionals to assist.

The Eastern Highlands provincial lockdown has been extended, though there are concerns that many have defied the lockdown rules. Police have said a lack of information has made enforcement difficult.

The International Foundation of Red Cross (IFRC) has called for a concerted international effort to assist the country. PNG Red Cross Secretary General Uvenama Rova said, “urgent efforts and further support are needed in healthcare to prevent a massive loss of life in the coming days and weeks.”

Australia has deployed its sixth medical assistance team to PNG, as well as a further 14 Australian Defence Force personnel to assist pandemic response logistics and emergency supply deliveries. Australia has provided an additional 240 oxygen concentrators to PNG, as well as 70,000 AstraZeneca doses. This brings the total number of doses provided to PNG from Australia to 144,970, in addition to 770,000 doses provided through the COVID-19 Global Access Facility.

Additionally, a British medical team has been deployed to the PNG highlands, assisting the Mt Hagen hospital, which is at capacity. Prime Minister Marape and Chinese President Xi Jinping had a phone call this fortnight to discuss Chinese assistance to PNG.

One major area of concern has been a mass migration from the Bintang Mountains regency in West Papua to remote border provinces of PNG. It is believed Indonesian forces are pursuing West Papuan guerrillas, who have been blamed for attacks on health workers. Due to the long running civil war in West Papua, locals have little trust in government officials.

Tonga has recorded its first case of COVID-19, and the island of Tongatapu is now under lockdown. The individual – who was asymptomatic and fully-vaccinated – was one of 215 people aboard a repatriation flight from Christchurch. The first case in the kingdom has spurred a rapid increase in vaccination, particularly amongst teenagers. 62 per cent of people are now fully-vaccinated, while 88 per cent have received one dose.

The Tongan Government has been criticised for acting slowly, with the government waiting for a number of days before announcing the lockdown. Rumours of a possible first case circulated on social media last week, leading to widespread community panic. The government denied there was a case, before later confirming it.

Vanuatu has moved to Alert Level One this fortnight, after two asymptomatic cases were identified at border checkpoints. The two individuals tested positive on arrival from New Caledonia, through a repatriation service. There is no suggestion that there has been a risk to the community as yet, with the cases in quarantine. Contact tracing is ongoing and officials are confident all contacts have been isolated. Testing at the country’s hospitals has been stepped up.

There have, however, been questions as to why the repatriation flight was allowed to make the journey from New Caledonia, given the current high rates of community transmission in the French overseas territory. Government ministries have been closed, and Prime Minister Bob Loughman has repeatedly cancelled media conferences, fuelling speculation of a potential lockdown.

Dr Sereana Natuman, acting director at Vanuatu’s Vila Central Hospital claims that there is only capacity for 60 COVID-19 cases, stating that the country’s health infrastructure would reach breaking point within a few days if there was community transmission in Vanuatu, like what has been recorded in Fiji or New Caledonia.

70 people are in isolation in Samoa, after a man escaped from quarantine and moved freely in the community before being caught. Repatriation flights may be delayed as a result.

Fiji hotels and tourism operators have reported a surge in demand from Australians planning to travel to the country in coming months as the border reopening draws closer. Prime Minister Bainimarama said in Glasgow that Fiji is ready for tourists, and that the United Kingdom is one of a number of approved travel sources. Of Fiji’s target population, 96.2 per cent have received one dose of a COVID-19 vaccine.

Briefly, a vaccination party has been held in Vanuatu, with 250 attendees inoculated within three hours, while a traveller from Tuvalu has tested positive for COVID-19 after arriving in New Zealand. Three cases of COVID-19 have been identified in CNMI, ending 217 days of no community transmission.