COVID-19 has begun to seriously re-emerge in the Pacific this week including on a cruise ship in French Polynesia, whilst states continue to struggle with border management, writes Hugh McClure.

The worrying trend of increasing COVID-19 cases has continued in Papua New Guinea (PNG), with the national count reaching 111. In neighbouring Papua Province the number of confirmed COVID-19 cases has now reached 3114. Elsewhere in the region, Fiji has recorded its first COVID-19 related death this week, with a 66-year-old man having died in quarantine after he returned from India. It is believed that he contracted the virus while having surgery in India. Further north, the number of cases in Guam has risen again this week, reaching 367, while the number of cases in the Northern Mariana Islands has reached 46. One cruise ship passenger in French Polynesia has also tested positive to COVID-19 this week. 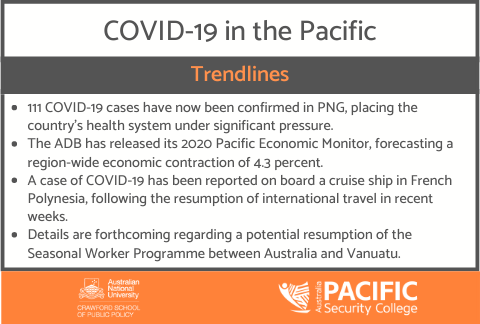 All eyes have been on the rapidly escalating situation in PNG this week, where a second COVID-19-related death has been confirmed. While the majority of cases have been recorded in Port Moresby, contact tracing is ongoing in Lae, after a man who flew to Morobe Province to attend a health workshop tested positive. More than 70 health department workers who were also at the conference have since entered quarantine.

The President of the Lae Chamber of Commerce has subsequently called for flights to be suspended between Lae and Port Moresby. Similarly, in Bougainville, where no cases of COVID-19 have been reported, officials have re-imposed limits on flights.

In the face of the unfolding crisis, health resources in PNG are under enormous strain. The PNG Nurses Association is threatening industrial action over government failures in the provision of PPE to frontline staff. The Rita Flynn Sports Complex, which has been Port Moresby’s isolation facility for many months, has now reached capacity. Health officials are working to establish an additional facility at the Taurama Aquatic Centre with capacity for 300 people.

In response to the capacity constraints, Australia has sent an AUSMAT team to PNG, including medical specialists and crisis response staff, with the goals of improving laboratories, case management, infection control, triage and emergency management as well as public health coordination. In addition, the US has this week provided 40 ventilators and New Zealand is supporting St John’s Ambulance to establish a drive-through testing clinic at the Rita Flynn Sports Centre.

In other news, the Asian Development Bank (ADB) has released its 2020 Pacific Economic Monitor (PEM). The PEM shows a region-wide economic contraction to the tune of 4.3 per cent. It has predicted that tourism-dependent economies, including Palau, the Cook Islands and Fiji will record the greatest contractions, with GDP in Fiji expected to shrink by 15 per cent. Looking to the future, the PEM has forecast growth of 1.6 per cent in 2021, reliant on the resumption of international travel.

Issues of border-management are again in the spotlight this week, after the Northern Mariana Islands recorded five additional cases of COVID-19. The Commonwealth recently abandoned isolation facilities, instead requiring citizens to quarantine at home and present for testing on their fifth day in the country. Two of the five new cases this week returned their first positive test on their fifth day in Saipan, raising alarm. Contact tracing of their associates has now commenced.

In a similar vein, more than 4,100 people have arrived in French Polynesia in the fortnight since border quarantine restrictions were lifted. It has been reported that 71 per cent of arrivals were international tourists, with 24 per cent of arrivals coming from the US. The statistics come as United Airlines prepares to begin commercial flights between San Francisco and Tahiti.

This comes as a tourist, believed to be of international origin, tested positive for COVID-19 on a cruise ship in French Polynesia, forcing all passengers on board the MS Paul Gauguin to isolate in their cabins. Meantime, New Zealand Prime Minister Jacinda Ardern has shelved plans for a travel bubble with Australia, saying that her government’s focus will instead be on a bubble with “realm countries” including the Cook Islands and Niue.

The Vanuatu Government has said that details will be forthcoming regarding the resumption of a Seasonal Worker Programme to Australia’s Northern Territory, which reports no evidence of community transmission. No Seasonal Workers have travelled to Australia since March.

Briefly, Samoa and the Solomon Islands have both extended their State of Emergency declarations, until the end of August and the end of November respectively. In Samoa, amendments to the list of permissible activities have been made with the bestowal of matai titles now permitted.