COVID-19 continues to spread in Fiji, whilst the nationwide vaccine rollout in Papua New Guinea has commenced, Hugh McClure writes.

Case numbers continue to rise in Papua New Guinea (PNG), which has now recorded 11,407 cases and 121 deaths. The United Kingdom variant of COVID-19 has now been detected in Guam, which has recorded 7,784 cases and 137 deaths.

Here is a snapshot of policy responses to COVID-19 in the Pacific region, correct as of 12pm AEST, 5 May 2021. 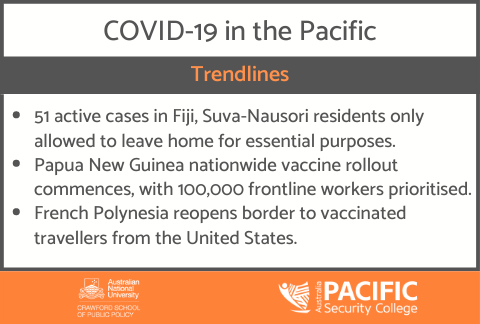 00,000 Fijians living in the Suva-Nausori corridor are only allowed to leave home for essential purposes, with the city divided into two containment zones. This follows a snap lockdown in response to a second-wave of COVID-19 cases on Viti Levu.

Authorities are scrambling to track and trace close contacts of two doctors who tested positive, as well as factory garment workers who may have come into contact with another positive case, however flash-flooding in Nausori is delaying these efforts.

Permanent Secretary of the Health Minister Dr James Fong said Fijians should prepare for a long battle with COVID-19, saying transmission of the Indian variant is more difficult to manage.

With schools now closed in the country he has not indicated when in-person learning may resume. A number of schools have been converted into isolation facilities.

The impact of the lockdown on lives and livelihoods in the country is already being seen. Foundation of Rural Integrated Enterprises & Development Fiji Chief Executive Officer Sashi Kiran said that people are running out of food, with food insecurity particularly dire in Nadi, where 80 per cent of businesses are closed. 100,000 calls have been placed with the food ration hotline, which has begun deliveries in the Suva-Nausori corridor.

PNG’s nationwide vaccine rollout commenced on 4 May, with 100,000 frontline workers identified as priority recipients for vaccines. Health Minister Jelta Wong said that the country’s vaccine drive has been delayed due to vaccine hesitancy. The PNG Chamber of Commerce said delays in the vaccine rollout process has threatened the country’s economic recovery.

The PNG Nurses Association raised concerns about how the government has spent COVID-19 funds, pointing to the lack of medical supplies. Doctors have said hospitals continue to be under-resourced, with basic supplies including gloves and tape running low, resulting in some hospitals closing their doors.

Test kits remain in critical shortage throughout PNG. New figures from Western Province reveal just 4,760 tests have been conducted to date, with 951 returning a positive result. Despite these shortages, Australian Medical Assistance Teams workers are set to leave PNG shortly.

Political leadership has been in focus in PNG this fortnight. Prime Minister James Marape has been met with widespread condemnation for his decision to use the COVID-19 situation to suspend parliament, thus avoiding a likely leadership challenge from Peter O’Neill. Transparency watchers have called for greater oversight of COVID-19 funds, saying that faith in institutions is not strong in PNG.

Many Pacific countries have increased barriers to travel in light of Fiji’s COVID-19 outbreak and the worsening situation in India. The PNG Government has barred any returning passengers from India, while Samoa has suspended a planned repatriation flight from the United States. All travel into Fiji has been suspended.

Conversely, French Polynesia has again reopened its borders to quarantine-free international travel for vaccinated travellers from the United States after a three-month border closure. The first flight to the country arrived from Los Angeles on 4 May. Meanwhile, Cook Islands’ quarantine-free travel bubble with New Zealand is now slated to commence on 17 May.

In economic news, the Asian Development Bank predicted that the Pacific will return to regular economic growth in 2021, after a 5.8 per cent economic contraction in 2020. Growth of 1.4 per cent is tipped, contingent on a return of tourism, recommencing delayed construction projects, and increased labour mobility and international trade.

Vaccines were welcomed enthusiastically to Fiji’s Western Division, with 4,400 people inoculated during day one of the vaccine administration campaign in Lautoka and Nadi. 4,289 people have now been vaccinated in Honiara, and 201 in Western Province, as the Solomon Islands’ vaccine drive gathers pace, while 64,000 vaccines have been delivered in Guam. With around half of the adult population now fully vaccinated, Northern Mariana Islands has scrapped its mask mandate for people who are now fully vaccinated.

Australia has provided additional funds for vaccine supply for Vanuatu, as the Health Ministry has engaged with public health partners and non-government organisations to assist the rollout process and reduce vaccine hesitancy. 83 per cent of Australians believe that Australia should help Pacific Island countries pay for COVID-19 vaccines, according to new polling released by the Lowy Institute.

riefly, construction of the Solomon Islands National Stadium is due to begin this week, after 120 Chinese workers from China Civil Engineering Construction Corporation completed their two-week hotel quarantine; 189 Samoan seasonal workers and 177 Fijian workers will travel to Australia this month; Australian Foreign Minister Marise Payne said that Australia will prioritise gender equality support to the Pacific in the wake of the COVID-19 pandemic; and the first person in Wallis and Futuna to contract COVID-19 in the community has died after spending 51 days in intensive care, bringing the territory’s death toll to seven.