Development, Economics and finance, Government and governance, Trade and industry, Health | The Pacific

Guam has recorded slight growth to 150 confirmed cases, while there have been no new cases confirmed this week elsewhere in the region. Despite this, Indonesian’s Papua province, which shares a land border with Papua New Guinea (PNG), has reported exponential growth in confirmed COVID-19 cases.

Here is a snapshot of policy responses to COVID-19 in the Pacific region, correct as of 12pm AEST, 5 May 2020. 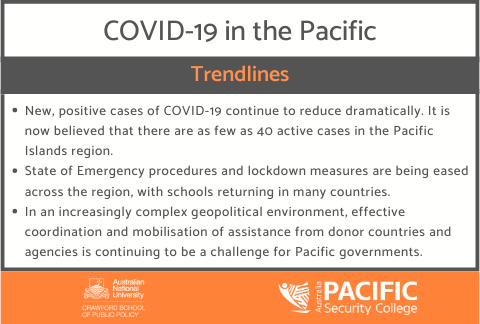 No news has been good news this week in the Pacific, with the number of confirmed COVID-19 cases in PNG and Fiji static at eight and 18 respectively. In PNG, all eight confirmed cases have since returned negative tests, indicating that they have recovered, while 14 of Fiji’s 18 cases have reportedly recovered.

However, cases have grown exponentially in the Indonesian provinces of Papua and West Papua this week, up from 141 on 29 April to 240 on 4 May. As such, PNG officials continue to have well-founded concerns of community transmission, and rank border crossing as their number one COVID-19 policy issue. PNG’s State of Emergency Controller has flagged that an increase in cases during the month of May is likely, resulting in an anxious wait for the results of over 900 samples which have been sent to Brisbane, Queensland for testing this week.

State of Emergency procedures and lockdown measures are being eased across the region this week, with schools returning in many countries which have had positive COVID-19 cases, including PNG and New Caledonia. Meanwhile, public servants in PNG who have been working from home for the past six weeks have been asked to return to work this week. Lockdown restrictions have been substantially eased in Samoa and Tonga, with church services having resumed in Samoa on 3 May and restrictions on nightclubs and kava bars easing.

International engagement in the region has continued to increase over recent weeks, highlighting the increasing number of donor countries, as well as international agencies engaging with the Pacific Islands region. Absorption of this increased engagement will continue to be a major political challenge presented by the COVID-19 pandemic, as countries – and the region more broadly – seek to coordinate and prioritise assistance flows, as well as manage the increasingly complex political relationships with donor partners.

The Federated States of Micronesia (FSM) and Tonga have also reported increased engagement from China, including the provision of cash. USAID pledged $27.5 million to support the COVID-19 response in the association states of FSM, the Republic of the Marshall Islands (RMI), and Palau. Notably, USAID has pledged $1.2 million to PNG, with that announcement coming after Taiwan announced 10,000 facemasks were headed to PNG.

Australia increased assistance to PNG, particularly the provision of personal protective equipment, while the World Bank and Asian Development Bank have substantially increased aid to Samoa, Palau, RMI, and the Solomon Islands.