New Caledonia’s deadly COVID-19 outbreak continued to deteriorate this fortnight. 4,539 cases have been recorded in New Caledonia in the past two weeks, bringing its total to 8,142 cases and 157 deaths. 7,990 out of 8,142 total cases have occurred in the past month, highlighting the seriousness of the latest outbreak. The lockdown has been extended until at least 17 October.

Northern Mariana Islands (CNMI) has now recorded 272 cases and two deaths, while two cases have been recorded in American Samoa, both of which were travellers from Hawai’i. French Polynesia has recorded 45,181 cases and 623 deaths, however, there are fears cases are no longer being reported reliably.

There have been no new reported cases in Wallis and Futuna, Solomon Islands, Palau, Marshall Islands (RMI), Vanuatu, or Samoa.

Here is a snapshot of policy responses to COVID-19 in the Pacific region, correct as of 12pm AEST, 6 October 2021. 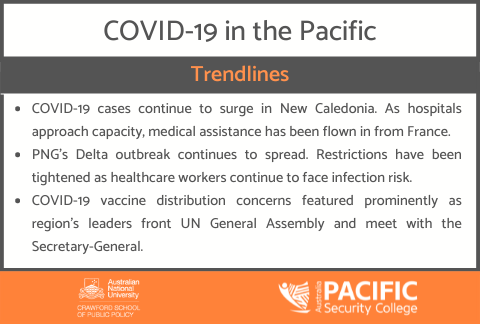 Case numbers have continued to trend upwards across PNG since the Delta variant was first detected. While the 67 cases reported on 30 September is not a large figure by global standards, the fact cases were detected across six different provinces highlights that the virus is likely spreading undetected throughout most of the country.

Five deaths from COVID-19 have been reported in Mt Hagen in the highlands, with a number of health staff also testing positive for the virus. There are concerns that the Mt Hagen hospital may need to close due to a lack of funding.

In response to rising cases, seven provinces are on ‘red alert’, with gatherings of more than 20 people banned, and the Goroka University put under lockdown. Health officials in Morobe are enforcing a ‘no-mask, no-entry’ policy. Communities along the Kokoda Track will receive prioritised vaccinations, supported by the Australian Government.

With cases continuing to rise in New Caledonia and hospitals at 95 per cent capacity, medical professionals have been flown in from France to assist.

Pacific leaders each addressed the United Nations (UN) General Assembly this fortnight, with COVID-19 concerns featuring prominently in many of the speeches from the region’s leaders. Fiji Prime Minister Frank Bainimarama used his speech to admonish global vaccine inequality, saying:

“It is appalling that wealthier countries are already considering third doses or boosters for their citizens, while millions of people including frontline healthcare workers in the developing world cannot access a single dose… Globally, thousands of lives are still being lost every day to the virus.”

PNG Prime Minister James Marape used his speech to call for greater international effort to counter vaccine misinformation. This came as Facebook said its Fight COVID-19 Misinformation campaign has reached 800,000 people in PNG. The presidents of RMI, Nauru and Palau each devoted portions of their speeches to petition for recognition of Taiwan, thanking the Taiwanese Government for the assistance it provided them throughout the pandemic.

Pacific leaders reiterated demands for global leaders to ensure the equitable distribution of safe and effective COVID-19 vaccines and treatments during a meeting with the UN Secretary-General this fortnight. A range of issues were discussed at the meeting, including climate security and preparations for the 2021 UN Climate Change Conference (COP26), oceans, nuclear legacy concerns, and progress on the Sustainable Development Goals.

In vaccination news this fortnight, restrictions have eased in Fiji now that the country has reached the milestone of 70 per cent double vaccination. Meanwhile, a group of church ministers in the country have resigned after refusing to get vaccinated. Prime Minister Bainimarama has appealed for all parents and guardians to register children aged 15 to 17-years to get vaccinated. The appeal comes as it has been revealed that as many as 8,345 people aged zero to 19-years contracted COVID-19 during the pandemic in Fiji.

he Solomon Islands Government has set a 90 per cent vaccination target to reopen the country’s international borders, while the Cook Islands Government said it will vaccinate the majority of its youth before reopening borders to New Zealand. CNMI authorities will offer a Pfizer booster shot to those aged over 64, as well as to those with underlying health conditions. Hundreds have protested against mandatory vaccination laws in French Polynesia, which passed the legislature in August. The laws, which come into effect on 23 October, will make it compulsory for any person in a public-facing role to be vaccinated.

Briefly, financial relief payments for Fijian businesses impacted by the pandemic have been extended until 2022, while Samoa’s two-day lockdown and vaccination drive fell short of expectations. 93 per cent of Samoa’s target population has now received one dose, while 47 per cent are fully vaccinated.