COVID-19 has emerged in the Solomon Islands, whilst PNG is slowly opening up to international travel, Hugh McClure writes.

Here is a snapshot of policy responses to COVID-19 in the Pacific region, correct as of 12pm AEST, 6 October 2020. 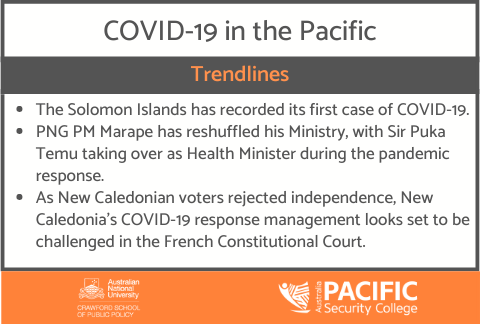 The Solomon Islands has recorded its first case of COVID-19 this week. The first case is a student who had been repatriated from the Philippines and has tested positive upon arrival after passing three negative tests prior to departure. The student, who is asymptomatic, is in isolation with two other close contacts. Frontline staff who may have had contact with the individual are being assessed.

PM Sogavare has heralded the response as evidence that the preparedness and response measures developed by his country over the past eight months have worked.

The total number of COVID-19 cases in PNG has increased to 540 this week. Reflecting rising cases, gatherings of more than 50 people have been banned. Despite this, the curfew in NCD has been lifted. PNG has opened its border to international travel from four more countries: Singapore, Hong Kong, Japan and the Solomon Islands, in addition to Australia. Passengers are required to obtain approval from the Pandemic Response Controller’s Office and show a negative test result before the flight. All passengers on domestic fights must also prove they are not infected. Reflecting the imperative to increase testing rates, WHO is fast-tracking 40,000 rapid test kits to PNG. Health officials have made it mandatory to test patients with respiratory symptoms and high temperatures.

PNG’s PM, James Marape, has reshuffled his cabinet, saying the changes within his ministry were required to preserve government stability. Sam Basil has taken over as Deputy PM, while Sir Puka Temu has become Health Minister with the outgoing Minister Jelta Wong transferring to the Civil Aviation portfolio. The changes come as the PNG Central Bank has revised down its GDP prediction for 2020, forecasting a four per cent contraction.

Elsewhere, Guam has now recorded 2,700 cases and 52 deaths, the Northern Mariana Islands has recorded 73 cases and 2 deaths, French Polynesia reports 2,026 cases and 8 deaths, while the Indonesian-controlled provinces of Papua and West Papua have identified 9,127 cases and 139 deaths.

As cases continue to increase rapidly in French Polynesia, the President has travelled to France where the French PM has committed to ongoing financial support. Meanwhile, in New Caledonia, voters have narrowly rejected independence in the second referendum in two years. With a turnout of 86 per cent, 53 per cent of voters rejected independence – a higher turnout and closer margin than the 2018 vote recorded. In the aftermath of the vote, New Caledonia’s COVID-19 response management is set to be tested in the French Constitutional Court, with pro-independence parties challenging decisions taken by the French High Commission, arguing they violate the Noumea Accord which transferred healthcare to local authorities. A third independence referendum may be held before 2022.

China has signed off on its annual contribution to the PIF through its China Pacific Cooperation Fund. US $1.08 million has been granted, with the money earmarked to support the Trade and Invest Network Office in Beijing as well as the Pacific Humanitarian Pathway on COVID-19.

Micronesian sub-regionalism has been in the spotlight this week, with the Micronesian Leaders Meeting occurring in person in Palau. Nauru’s President has said Micronesia is leading the world in terms of travel bubbles, with the virus-free status of all five Micronesian countries being “commendable”.

Micronesian leaders have said they would consider withdrawing from the Pacific Islands Forum if their candidate is not successful in his bid to become Secretary-General. These developments come as preparations are underway for the first group of Marshall Islanders to be repatriated home from the US before the end of the month. This marks the first repatriation journey to the Marshall Islands from a COVID-19 infected country.

Also with relation to repatriation, another Garuda flight from India to Fiji, which stopped in Jakarta and Port Moresby, has been cause for concern, with some enquiring about the potential for COVID-19 cases to come into contact with passengers on the journey.

Briefly, also in the news this week: a travel bubble between New South Wales, the Northern Territory and New Zealand has been announced and will come into effect from 16 October; the Vanuatu Opposition has enquired when outstanding stimulus payments promised to workers and businesses will be paid; the new Cook Islands PM Mark Brown says he expects quarantine-free travel with New Zealand by December, and; the Pacific Community says that with the tourism industry on ice, tuna tagging is now more important now than ever for Pacific revenue streams.