Papua New Guinea is collaborating with both Australia and China to secure vaccine supply, while vaccine scepticism is decreasing immunisation rates in Melanesia, Hugh McClure writes.

Papua New Guinea (PNG) has now recorded 7,406 COVID-19 cases and 67 deaths. Wallis and Futuna has recorded 429 cases and four deaths, while lockdowns appear to have slowed the spread of community transmission in New Caledonia, which has recorded 121 cases.

Here is a snapshot of policy responses to COVID-19 in the Pacific region, correct as of 12pm AEDT, 7 April 2021. 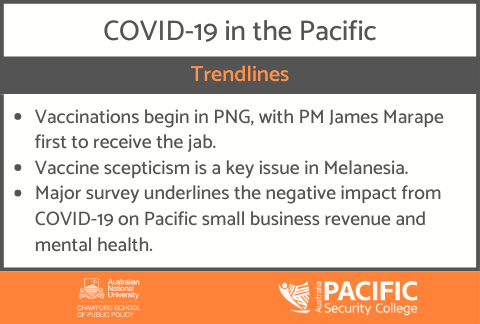 PNG’s vaccination drive has commenced, with Prime Minister (PM) James Marape and his brothers becoming the first in the country to receive a vaccination on 30 March, in an effort to boost public support for the vaccine. Around 400 people have been vaccinated during the first week of the rollout.

The PM has welcomed Australia’s continued advocacy for more vaccines to be provided to its northern neighbour, but has told journalists that his government is collaborating with other partners, including China, to procure vaccines.

National-provincial relations in PNG are in the spotlight this week.

Marape has demanded that provincial governments better identify and communicate the health resources they need, so the national government can effectively provide critical health supplies.

He has also requested provincial health authorities report COVID-19 response plans, and details of how funding received to-date has been spent. Meanwhile, the country’s Pandemic Control Centre said there has been a breakdown in data collection and reporting from provinces.

Also making news in PNG this fortnight, nurses in Morobe province are again threatening industrial action over a lack of staffing and supplies, while others have walked off the job. A hospital in East New Britain has become the latest to shut its doors after more than 20 staff tested positive for COVID-19; and Lae’s University of Technology has entered lockdown, after the deaths of two academics, both of whom displayed COVID-19 symptoms.

A women’s health campaigner said that Bougainvilleans are showing a ‘careless attitude’ to the threat posed by COVID-19, while sorcery-related violence is reported to have increased during the pandemic.

Australia and security in the Pacific Islands

Vaccine scepticism is a key issue in Melanesia. Disinformation about the vaccine on Facebook has been identified by PNG Health Minister Jelta Wong as the ‘biggest challenge to its efforts to curb the spread of the virus’.

In PNG, even health workers remain hesitant to receive vaccines, despite the surge in cases in the country.

In Solomon Islands, Prime Minister Sogavare expressed his disappointment in frontline civil servants who have not taken up the opportunity to receive their vaccinations. While 24,000 vaccines have arrived in the country, only 600 have been administered due to low compliance in communities.

The Solomon Islands Government is prioritising COVID-19 vaccinations for communities on its border with PNG, stating that its greatest concern is unauthorised entry into the country along its western border.

Approximately 50,000 Fijians, including front-line staff, healthcare workers, police and military officers, civil servants, and tourism workers are now eligible to receive the two-dose AstraZeneca vaccine. Almost half of the population of Wallis and Futuna has now been vaccinated, just two weeks after vaccines arrived, as the heavily-infected French territory prepares to end its four-week lockdown. The significant number of vaccines administered has slowed the rate of infection, with just six new cases identified over the Easter weekend.

The Marshall Islands Government has approved use of the one-shot Johnson and Johnson vaccine for the republic’s outer islands. More than 70 per cent of the urban population in the Marshall Islands has now received the Moderna vaccine. Meanwhile, the Northern Mariana Islands has recorded the highest vaccination rate in the US.

Nearly 90 per cent of the 110 businesses surveyed for Pacific Trade Invest Australia’s Pacific Business Monitor 2020 reported a decline in revenue, largely due to international border closures. Solomon Islands and Vanuatu reported the highest decreases. 62 per cent of business operators identified negative impacts of the pandemic on their mental health, with female-led businesses found to be most impacted by the pandemic.

travel bubble was announced between Australia and New Zealand this fortnight. Elsewhere, the Palau-Taiwan travel bubble is now operational, with more than 100 tourists having now arrived in Palau.

In contrast, provincial officials in West Sepik province have welcomed the government’s decision to close its border with West Papua. Fiji’s government has also increased its caution, saying that all flights from PNG will need to be cleared by the Health Ministry for COVID-19 threats.

The Marshall Islands Government has increased repatriation caps while reducing mandatory quarantine requirements, and domestic flights have resumed in New Caledonia as the territory emerges from four weeks of lockdown.