COVID-19 has re-emerged in a number of Pacific states, whilst seasonal workers in Australia and New Zealand have faced mounting uncertainty, writes Hugh McClure.

Here is a snapshot of policy responses to COVID-19 in the Pacific region, correct as of 12pm AEST, 7 July 2020. 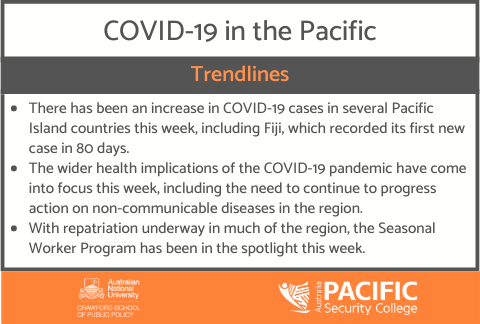 iji has recorded its first new coronavirus case this week, bringing the country’s total number of confirmed cases since the start of the pandemic to 19. The case is believed to be a 66-year-old man who recently returned to Fiji from India. It is believed that he poses low risk to Fiji, which had gone 80 days without recording a new COVID-19 case, as he was in border quarantine and has now been transferred to an isolation facility at Nadi Hospital.

Further north, the Commonwealth of the Northern Mariana Islands (CNMI) has recorded its first positive COVID-19 case after nearly a month with no new cases, bringing their total to 31. The individual is believed have entered CNMI on board a June 27 flight from Guam.

The case came after CNMI concluded quarantining arrivals from Guam at an isolation facility, instead allowing arrivals to self-quarantine at home, with mandatory testing after 5 days. Meanwhile, the CNMI Governor is under-fire this week as revelations emerge that he traveled to remote, northern islands as part of an ecotourism initiative. Elsewhere in the North Pacific, the total number of confirmed COVID-19 cases in Guam reached 288 this week.

There is relief in Papua New Guinea (PNG) this week as no new cases have been reported, bringing an end to the country’s burst of new cases. Across the border, in the Indonesian provinces of Papua and West Papua the total number of cases has reached 2,027 – up from 1,699 a week ago – and 265 respectively.

With the region’s attention focused on dealing with the COVID-19 pandemic, in recent weeks a growing number of technical bodies and senior medical officers have cautioned that ongoing and underlying health security challenges in the region should not be ignored.

This week, the Deputy Chair of the PNG National Health Board, Dr Mathias Sapuri, cautioned that during the COVID-19 pandemic there has been a spike in death rates from diseases such as tuberculosis, other respiratory diseases, mental illness, as well as maternal and newborn mortalities.

His advice followed a recent report from SPC which highlighted that COVID-19 is compounding the Pacific’s non-communicable disease (NCD) crisis. Health experts have warned that NCDs, which account for 86 per cent of deaths in the Western Pacific, make people more vulnerable to COVID-19, arguing that it is imperative that health systems continue to provide essential care and avoid the discontinuation of essential treatment during the COVID-19 pandemic. Relatedly, the Australian government announced a commitment of $8.3 million on 27 June to tackle the threat of drug-resistant tuberculosis and antimicrobial resistance in the Pacific region.

The Seasonal Worker Program in both Australia and New Zealand has made headlines this week. With travel restrictions in place, there is reported concern regarding labour shortages in Australia’s horticulture sector. In response, it has been suggested that travel be opened up to Pacific Islanders to be able to fill seasonal labour shortfalls in Australia, and work on farms following periods of quarantine and rigorous health checks.

Meanwhile, in New Zealand, where the season is over, seasonal workers remain in the country despite being due to return home in May. Concerns for the mental health and wellbeing of such workers have been reported in regional media this week. This comes as repatriation efforts continue across the region.