Unofficial border crossings remain a key concern for those attempting to control COVID-19 in the Pacific, whilst the economic fallout of the pandemic is beginning to be felt, writes Hugh McClure.

Papua New Guinea’s total COVID-19 cases continue to grow, with 497 cases now confirmed in the country since the pandemic began. The geographic spread of the virus continues to broaden, with East Sepik and West New Britain provinces recording their first confirmed cases of the virus.

Elsewhere in the region, Fiji has recorded a slight increase in cases this week, bringing its total to 31. Guam has now recorded 1671 cases, which represents a doubling in the past fortnight. French Polynesia reports a total of 773 cases since the pandemic began, the Northern Mariana Islands has recorded two new cases, increasing its total to 58 cases, while New Caledonia has recorded 26 cases, an increase of three in the past week all of which were in quarantine facilities. The Indonesian-controlled Papua Province and West Papua Province have recorded 4148 and 940 cases respectively.

Here is a snapshot of policy responses to COVID-19 in the Pacific region, correct as of 12pm AEST, 8 September 2020. 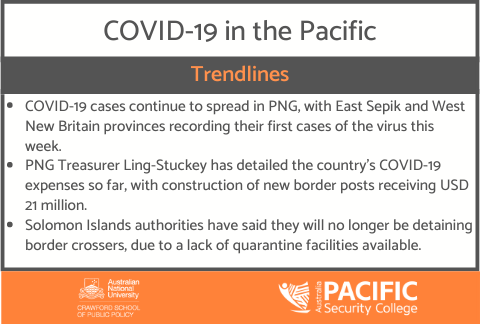 NG’s Western Province continues to report new cases of COVID-19, with 174 cases now confirmed in the province, second to the National Capital District’s (NCD) 290 cases of the virus. Two schools in NCD were advised to close for a fortnight this week after a teacher and student tested positive to COVID-19, while the nightly curfew in NCD has been reduced, now running from 12am until 5am. The sale of liquor has now been extended to Fridays.

PNG Treasurer Ian Ling-Stuckey has detailed the break-up of the country’s COVID-19 stimulus package. Of the US$79 million investment in health and security, water sanitation and hygiene received US$17 million, frontline provincial health received US$10 million, 8.5 million was provided for PPE and US$1.4 million has been provided to churches for food provision.

Reflecting the country’s concern for the porous border with Papua Province, US$21 million has been spent on constructing new border posts. The Treasurer has said that only some of the activities in the economic stimulus plan have been implemented. Meanwhile, businesses in PNG experiencing a downturn have appealed to the government for tax relief this week. The government has approved a SUD 56 million relief package to boost small and medium enterprises. The money will be allocated to commercial banks and the National Development Bank for low-interest loans. Aid flows into the country continue to diversify, with the UK donating US$1.2 million to PNG’s COVID-19 response plan this week.

Authorities in the Solomon Islands have announced they will no longer be detaining people who cross the country’s porous western border with Papua New Guinea. The announcement comes due to a lack of quarantine facilities available for use. The border represents a major frontline in the Solomon Islands’ defence against COVID-19, with PNG now having 497 confirmed cases of the virus, compared to no cases yet detected in the Solomon Islands. Meantime, the closure of the border is reported to be contributing to food shortages in communities in the western portion of the country, including on the Shortland Islands. It is reported that the border closure is cutting off access to traditional markets.

Amendments passed to the Public Health Act in Fiji will see visitors to the country now have to pay their own quarantine costs. Fiji has five active COVID-19 cases, all of which are in border quarantine. Fiji’s opposition party, SODELPA, is calling on the government to close the Blue Lane initiative, claiming it could bring illegal drugs into the country.

Samoa expected to receive a repatriation flight servicing seasonal workers from New Zealand on September 11, but the flight has been delayed until September 18. The Samoan PM has flagged the potential for repatriation flights from Australia, Japan and China before the end of the month. In Tonga, more than 60 people were repatriated on 2 September from Fiji and Kiribati.

The economic impacts of the pandemic continue to be felt across the region. Niue’s newly-elected government is reported to be considering passing strict austerity measures as it stares down a US$3.8 million deficit, with wage cuts, reduced expenditure and increased revenue collection all floated by the Finance Minister as possible policy options.

Briefly, as schools reopen in French Polynesia teachers are threatening to strike. This follows last week’s threatened strike from five unions in the country. 711 cases of the virus have been recorded in French Polynesia since borders were reopened to international tourism in July.

Conversely in New Caledonia, travel restrictions have been extended until 27 March 2021. No community transmission has been recorded in New Caledonia which has recorded 26 cases of the virus.