Many Pacific countries are beginning to open their international borders, but the persistent presence of COVID-19 is complicating plans.

Here is a snapshot of policy responses to COVID-19 in the Pacific region, correct as of 6pm AEST, 2 May 2022. 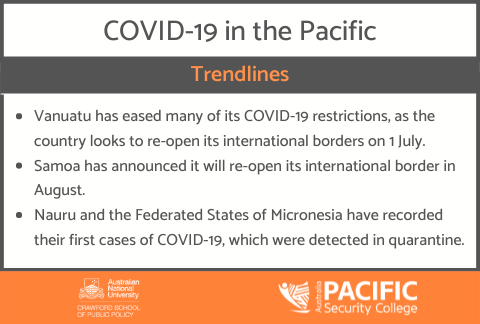 Vanuatu has lifted its curfew requirements for Efate and its outer islands, as the government eases restrictions for the first time since COVID-19 cases were detected in the community. From 22 April, the 8pm-6am curfew was removed, and church and public gatherings can now be organised in compliance with social distancing measures. Repatriation flights have also resumed.

From 29 April, schools were allowed to resume, and people have returned to working in-person. Despite the easing of restrictions, there have been reports in outer provinces, such as Pentecost Island, that the COVID-19 response has been hindered by a lack of testing equipment, compromising the delivery of other medical services.

These announcements follow the Vanuatu Ministry of Health’s new Health Roadmap, as the country gears up for its international border reopening on 1 July. Travellers from New Zealand, Australia, New Caledonia, and Fiji will now only spend three days in quarantine instead of 14, whilst travellers from other nations will only need to quarantine for a week. The country has recorded 7,158 cases and 13 deaths.

Samoa has announced that it will be opening its international borders in August, in a major change to the existing State of Emergency rules. Level 2 restrictions will continue until 17 May, with schools gradually reopening in May, business hours increasing, and the ban on mass gatherings lifted. International flights for Samoan citizens will resume in May, with a broader reopening of the borders occurring in August.

FSM recorded five new cases in quarantine, following a repatriation flight into the country. The positive tests were discovered in Kosrae and were the first cases in the country. The quarantine period for all passengers, regardless of their test result, has been extended. There hadn’t been any spread into the general community.

Nauru has recorded its first cases of COVID-19, which were detected in quarantine. Two people who travelled by plane from Brisbane to the island tested positive at the border on 4 April. According to President Aingimea, both displayed no symptoms and were recovering well.

Solomon Islands has re-imposed restrictions, as the country begins its fight against a second wave of infections. The country has recorded 14,786 infections thus far, and authorities have expressed concern about large-scale community transmission in Honiara. A number of cases have been recorded in Temotu Province, which was previously the only COVID-19 free jurisdiction. In light of this outbreak, the government has limited gatherings to 10 people.

In the week leading up to 26 April, New Caledonia recorded no new COVID-19 related deaths, despite a slight increase in case numbers. 96 positive cases were reported, raising the cumulative incidence rate to 35 per 100,000 people.

Authorities in Guam believe that the Delta variant is no longer circulating in the community but have urged caution. An executive order in mid-April removed the requirement for people to wear masks in outdoor settings. Governor Lou Leon Guerrero indicated that if the island continues at its low rate of community transmission, the indoor mask mandate will be lifted on 3 May.

Cook Islands recorded its first COVID-19 death since the virus was detected in February. The country has recorded a total of 4,990 cases. Prime Minister Mark Brown has further eased restrictions, allowing people to travel to Aitutaki from Rarotonga without proof of vaccination or a pre-departure rapid antigen test.

Niue has eased some COVID-19 restrictions. Travellers will be required to undertake seven days of mandatory quarantine and three days home isolation before entering the community. The Niue Government has also released its proposed border re-opening timeline, with weekly passenger flights to begin on 8 August.

arshall Islands have recorded their largest number of COVID-19 cases in quarantine since the pandemic began. Eight people have tested positive from a repatriation flight and are in quarantine at the American Army Base at Kwajalein Atoll. Authorities have stated that the cases do not represent any threat to the community.

Briefly, some nurses in American Samoa’s only hospital have been placed on leave for failing to comply with COVID-19 mandates. Northern Mariana Islands has recorded two weeks of no hospitalisations, but will continue to enforce mask-wearing requirements. Finally, Fiji released data outlining that unvaccinated adults are dying at 27.2 times the rate of fully vaccinated adults during its outbreak.