COVID-19 cases continue to rise in the Pacific, with many island nations experiencing their first outbreaks of the pandemic.

As the two-year anniversary of the pandemic in the Pacific approaches, island nations continue to see record numbers of cases, and in some instances hospitalisations. French Polynesia and New Caledonia have seen a significant upsurge this month, with the territories in total recording 66,699 and 53,143 cases respectively. Papua New Guinea (PNG) has seen the beginnings of a further wave of infections, increasing its total infections to 41,290. The cumulative case numbers in Solomon Islands are 6,937, Kiribati has recorded 2,914 cases, Fiji 63,756 cases, and Guam has seen 37,300 infections.

Vaccination rates in the region are similar to figures at the end of January, with the rollout of booster shots accelerating in a number of countries. Tonga and Samoa have now vaccinated 90 per cent of their eligible populations, an important step in the two countries’ plans to re-open. Despite outbreaks, rollouts in Kiribati and Solomon Islands remain stagnant, with an inoculation total rate of only 38 per cent and 12 per cent respectively.

Here is a snapshot of policy responses to COVID-19 in the Pacific region, correct as of 12pm AEDT, 1 March 2022. 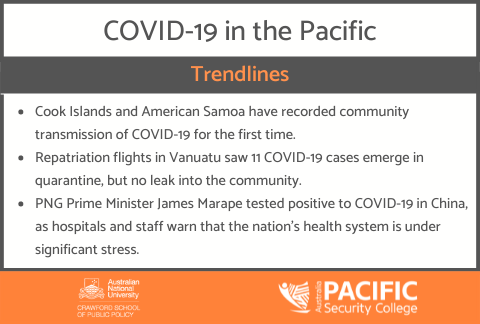 Cook Islands detected their first cases of community transmission since the pandemic began, with the total number of cases in the country standing at 10. The tiny nation had already been on alert, after a visitor tested positive for the Omicron variant in New Zealand, soon after leaving Rarotonga.

Subsequently, three tourists from Auckland tested positive and are in isolation in their private holiday accommodation. Another person travelling to Aitutaki tested positive on Saturday 19 February. The cases have prompted fears of ‘silent transmission’ on the islands, as Prime Minister Mark Brown highlighted there may be further cases in the community. However, authorities are confident they can avoid a widespread outbreak, due to early testing, and the nation’s extremely high vaccination rate of 96 per cent.

American Samoa has been placed on ‘Code Red’ by Governor Lemanu Peleti Mauga, as the territory recorded community COVID-19 cases for the first time. Following a number of cases identified on a 27 January repatriation flight from Honolulu, a quarantine health worker is believed to have contracted the virus and spread it within the community.

The total confirmed cases in the outbreak stands at 63, as citizens deal with long waiting times for testing and vaccination. Government restrictions implemented to stop the spread of the virus include a ban on public gatherings, passenger air or sea travel, and limited hours for some businesses.

Vanuatu Prime Minister Bob Loughman confirmed 11 new cases in quarantine at the country’s border. Following a number of repatriation flights in February, seven travelling passengers tested positive on arrival and four frontline health workers have subsequently been infected. Efate and its offshore islands have subsequently moved to Alert Level One.

The cases caused confusion within the country, as rumours and misinformation spread on social media that Efate was being locked down, and that there was an outbreak at Port Vila Hospital. Vanuatu has recorded just 15 cases of COVID-19 since March 2020, and has avoided community transmission so far, however, only 25 per cent of its population is fully vaccinated.

Why PNG’s fight against COVID-19 starts with health workers

PNG Prime Minister James Marape tested positive to COVID-19 during a trip to China in early February. Attending Beijing on the invitation of Chinese Leader Xi Jinping, Marape was still able to hold a virtual meeting with Premier Li Keqiang, and only suffered mild symptoms. According to the PNG National Disease Command, he was cleared to return to work on Wednesday 16 February.

PNG reopened its international border for tourism on the same day. Visitors over the age of 18 must be fully vaccinated, all passengers must show proof of a negative COVID-19 test 72 hours before arrival, and then be re-tested on arrival. The Australian Broadcasting Corporation has reported on the dire state of the PNG health system, highlighting that a shortage of funds, medications, and staff have compromised its capacity to treat patients.

Kiribati has extended its lockdown until 4 March, as the virus continues to spread across the country. Cases have now been recorded outside of South Tarawa, and 11 deaths have been recorded. However, the government has lifted travel restrictions between South Tarawa and the outer islands, allowing students and workers to return to their families.

Tonga eased some of its lockdown restrictions on Monday 28 February, with the night-time curfew scaled back but remaining in place. This follows initial measures on the 21 February, which allowed small retail shops to operate on reduced hours, and marriages and funerals to resume with capacity restrictions.

Tertiary education will resume operating, but home schooling will be maintained for both primary and secondary students. Tonga now has 178 active cases, including a number of cases within its prison system. It has also reduced the period of hotel quarantine for international flights to 15 days and resumed flights.

riefly, the Marshall Islands is looking at easing quarantine requirements in Hawaii for people looking to return to the country. Residents in Wallis and Futuna are struggling to return home, as they must continue to quarantine in Noumea, before serving further isolation in the territory. The government has announced that this will only be changed once 75 per cent of the total population is fully vaccinated.

Finally, flights will resume for fully vaccinated travellers between French Polynesia and New Zealand in July, for the first time since March 2020. Other Pacific Island countries won’t be able to enter New Zealand until October.

This article is part of the Australia Pacific Security College (APSC)’s continued coverage of the COVID-19 pandemic in the Pacific. Click here to access APSC’s COVID-19 tracking map, which is updated weekly with the latest vaccination and case numbers across the region.