More than two years into the pandemic, COVID-19 has now been officially recorded in every Pacific Island country, and more countries are looking to re-open their international borders as vaccination rates edge higher.

Tuvalu has recorded its first cases of COVID-19 in quarantine since the pandemic began, making it the final sovereign Pacific country to end its COVID-19-free status, though Tokelau and Pitcairn Islands have yet to record any cases. Tuvalu Acting Prime Minister Minute Taupo announced the cases on 20 May, with a further three suspected.

All the cases arrived on a flight from Fiji and remain in quarantine. The cases did not result in any restrictions. Schools and businesses remained open, and incoming repatriation flights continued according to schedule. The country’s vaccination rate is at 52 per cent of its total population. 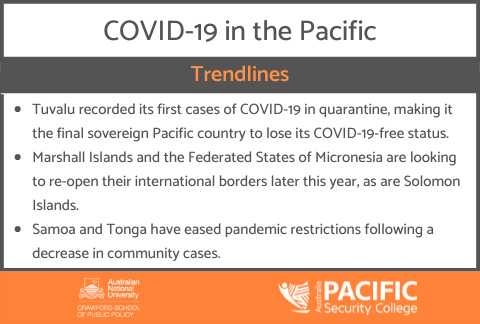 Federated States of Micronesia (FSM) has announced its plan to re-open borders without quarantine requirements on 1 August. Between now and then, an attempt will be made to increase vaccination numbers and medical staff. Travellers who enter the country will have to show proof of full vaccination and a negative COVID-19 test. A number of repatriation flights, have been announced in June from Guam to Yap, Chuuk, Pohnpei, and Kosrae.

Meanwhile, Marshall Islands is considering removing some of its quarantine restrictions. Until the end of last year, the country had some of the world’s strictest entry conditions, maintaining a four-week quarantine system.

The country is now considering eliminating the out-of-country quarantine requirement, and reducing the in-country quarantine period. Cabinet is expected to review a COVID-19 roadmap to full international border re-openings in the coming weeks.

Both FSM and Marshall Islands have recorded cases in quarantine, but they have avoided community transmission for the duration of the pandemic.

Tonga has continued to ease restrictions following a reduction in COVID-19 cases. From 21 May, all businesses except nightclubs were able to open for their normal hours. Secondary schools were also re-opened on 23 May, however primary schools are still closed. A curfew remains in place from midnight until 5am. The Kingdom is expected to re-open its border in October or November of this year.

Samoa has also eased pandemic restrictions, downgrading its COVID-19 alert level to Level 1. Prime Minister Fiame Naomi Mata’afa announced the change on 31 May, to be reviewed in four weeks. All schools have now officially re-opened, with pre-schools to resume from 4 July. Such changes reflect the gradual reopening of the country, with international arrivals allowed from 1 August. The country has a 98 per cent first dose rate, and 93 per cent of its adult population fully vaccinated.

Solomon Islands will reopen its international border on 1 July, allowing foreign nationals to enter the country. Arrivals will still have to show a negative polymerase chain reaction (PCR) test taken within 72 hours before arrival and complete a rapid antigen test (RAT) when in the country. From 1 June, the quarantine period for international travellers will drop to six days, in anticipation of a full reopening in July. This is despite its low vaccination rate, which is only 24 per cent of the total population.

Papua New Guinean authorities and the World Health Organization (WHO) have warned of the potential for high community transmission during the upcoming election period. The country’s vaccination rate is still the lowest by far in the Pacific, with only three per cent of the total population receiving two doses, and 30 per cent of health workers. Frontline health workers and journalists are at the highest risk of catching the virus, according to WHO. People have been urged to take precautions during the campaign, while voting, and at any election gatherings.

The French Government has removed the requirement for mask-wearing in travel between France, New Caledonia and French Polynesia. Restrictions remain for Wallis and Futuna, however unvaccinated travellers are now able to visit overseas French territories. French Polynesia and New Caledonia remain two of the most COVID-19 impacted jurisdictions in the region, with case numbers totalling 72,922 and 62,016 cases respectively.

anuatu has now vaccinated 75 per cent of its eligible population, as cases reported in 2022 climb above 9,000. Community transmission in the country remains steady, with the Ministry of Health reports two sub-variants of Omicron circulating nationally.

Fiji’s Health Ministry reported an upward trend of COVID-19 cases in May. This is despite strong second shot coverage of 91 per cent, though the booster rate is only at at 29.5 per cent.

The American Samoa Government is looking to purchase 65 acres of land in Hawaii to act partly as a base for people unable to return to the country because of COVID-19. Guam has offered financial incentives for residents aged above 12-years-old to receive their booster shots. Finally, the Northern Mariana Islands has allowed booster shots for children aged between five and 11.

This information in this piece is accurate as of 12pm AEST, Tuesday 31 May