When security screening goes too far

In a world increasingly on high alert from terrorism, Melanie O’Brien analyses the balance between fear, security and human rights, from a very personal perspective and asks, have heightened security measures gone too far?

On 27 July, I flew out of Berlin Tegel airport. I had been in Germany for over a week, including in Munich just before the shooting that killed nine people. Germans in general seemed relaxed, out enjoying the summer days and long evenings. However, as can be imagined, German security is far from relaxed. There is a heightened sense of fear and sharpened need for securitisation among the security forces.

This I experienced firsthand when leaving Germany. I travel regularly, through many different countries, whose airport security has both certain similarities and certain differences. The regulation of carry-on liquids, the scanning of check-in luggage and walking through a metal detector are standard. Other elements are entirely arbitrary and, despite what any one security guard tells you, differ between countries and even airports. I am always ready and organised for the standard security checks when I fly, and accept that there may subsequently be additional measures that have to be taken.

My experience was this: after going through the metal detector, which beeped, instead of being asked to take off my shoes and re-pass the detector (a usual reaction, given I had no metal on me and was wearing only shorts and a t-shirt), or have a wand waved over me, I was ordered by a security guard to raise my arms. Without warning and without asking my permission to touch me (even in the USA, they ask your permission first), she immediately began to touch me with her hands and a large plastic wand-type device.

She began at my shoulders and then under my arms. But this was no ordinary pat-down. A ‘pat-down’ is just as described – patting. Rather, what I was subjected to was a forceful, firm massage. I have never experienced such physical invasion at a security point. This made me immediately uncomfortable, but then she did the same thing on my breasts. At this point, I recoiled because I was not comfortable with a complete stranger massaging my breasts and certainly not without my permission, a reaction that I imagine would be shared by most, if not all, women.

I asked the security guard why she was touching me so much. She immediately became aggressive, started yelling, and told me to stand against the wall and that she was calling the police. What followed was about 30 minutes of humiliation as not one security guard or police officer actually listened to my complaint, instead repeating “it’s normal” over and over again. The male police officer the security guard called was condescending, and sneered at me for not speaking German (it had been eight years since I had spoken German and I thought I was doing pretty well with it, despite perhaps being a little too rusty when applied to this circumstance of ‘I don’t like strangers feeling my breasts’). They drew attention to me by making a huge fuss, being noisy, as if to make an example of me, while saying “look, nobody else complains”. My response was “well, they are probably too afraid to!”

Ironically, as they attempted to make this point, the same security guard who had assaulted me was attempting to do the same thing to a toddler, who was clearly equally unhappy at having some strange person touch him, and promptly burst into tears. A male security guard came over to join in the fuss, patronisingly repeating “it’s normal”. I asked him if he would like it if a stranger grabbed his penis. He replied “that’s different!” Well, of course it is, because a woman’s body is public property, after all…

A female police officer was brought over, and she was the only one of the staff who was professional and respectful, and yet, she still would not actually listen to my complaint, despite my demonstration (on her shoulders and arms only, of course!) of the method of ‘pat-down’ I had received. I suggested alternative, less-invasive measures such as removing my shoes and passing through the detector again. These were refused. I was given the choice of a pat-down, strip search or not flying.

When did we become a society where the first option is no longer the least invasive one? In the end, of course, I was left with no choice if I wanted to make my flight. They marched me over to a curtained cabin, where a different security guard gave me a pat-down, after which I told the police officer that this was a normal pat-down. This was the first moment when I think she may have finally realised what I had been telling them all along – that the first security guard’s conduct was neither normal nor appropriate. She said she would talk to the first security officer, but that was it. At this point, I went to leave, but they marched me back to the detector, where they made me take off my shoes and put them through the scanner- exactly as I had suggested from the beginning.

Broken windows theory tells us that disorder and crime are connected through fear and social control, and we can certainly see the application of this theory at airport security. Fear of terrorism (that is, disorder and crime) is embodied into social control, where passengers are obligated to undergo some kind of security check in order to be permitted to board their flight. However, it has reached a point where the social control is so extreme that no passenger is allowed to request a different, less invasive security option, or to question a violation of his or her rights through the enactment of a security action without being threatened by withholding the ability to fly.

What happened to me at Tegel was assault, and in fact, it was sexual assault. The fact that it occurred in the context of a security check does not mean it was anything else. 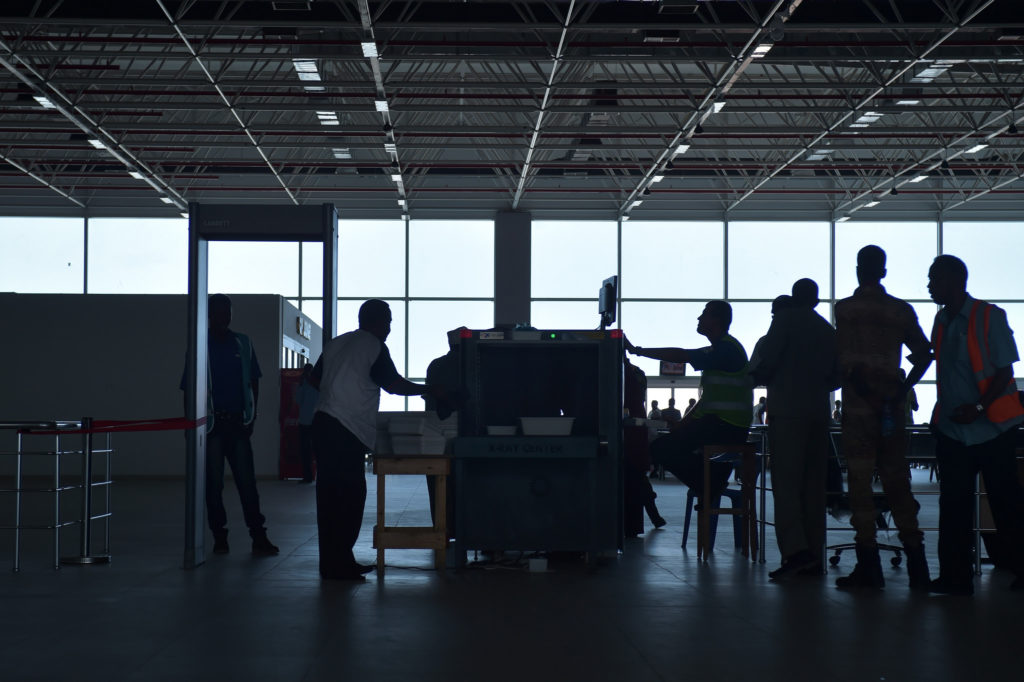 Yes, we live in a time where there are terrorist attacks. But then, terrorism has always existed. We also live in a time of globally recognised, legally enshrined human rights. Germany is a party to the European Convention on Human Rights, as well as many other international human rights treaties. These rights still apply; even if there have been terrorist attacks. Among these rights are the right to dignity and the right to privacy, both of which were violated by the security staff. In addition, other rights violations could be argued: the threat of removal of the right to freedom of movement (my right to leave the country); and the right to security of person (bodily integrity).

The fact that I was subjected to such a physical invasion in the first place, and that not one single security guard or police officer actually listened to my complaint, or took it seriously, raises serious question about the commitment of Tegel – and by extension, the German government – to upholding fundamental human rights and freedoms in the face of terrorist threats and heightened security.

The majority of people are not terrorists; they are just people travelling for work or to see friends or family, and we should not forget that. Human rights are there to protect us from overreaching state apparatuses, but it is becoming all too easy for states and their representative organs to ignore human rights and conduct themselves with impunity. Taking a plane does not mean a passenger is automatically giving up their human rights (or even automatically agreeing to be touched by a security guard). There is a desperate need for citizens to hold their governments accountable and to ensure that the erosion of rights does not continue. We need to stand up to government bodies that abuse our rights and not just accept it out of fear or complacency. If we do stand up, they will finally get the message that no, this is not normal.