Crowding out the Pacific

Why has Australia performed so much worse than New Zealand when it comes to Pacific seasonal workers?

The Australian outcome is what the research literature predicts. The ‘crowding out’ hypothesis asserts that unregulated migrant labour will crowd out regulated options. Employers here prefer the more flexible, much less regulated backpacker (formally known as Working Holiday Makers).

It’s less hassle, and as recent media and academic research has shown, easier to get away with underpaying backpackers, where no government approval or reporting is required, than with seasonal workers, where stringent approval and reporting requirements are imposed.

The world as a hostile workplace

How then to explain New Zealand’s contrary performance? That’s what we set out to do in our new Asia & the Pacific Policy Studies paper ‘Pacific seasonal workers: Learning from the contrasting temporary migration outcomes in Australian and New Zealand horticulture.’

We came up with five factors which explain why, as the graph below shows, New Zealand’s 2007 seasonal worker scheme (called the RSE or Recognised Seasonal Employer) has been much more popular than Australia’s 2009 Seasonal Worker Program (SWP). (Click to see chart) 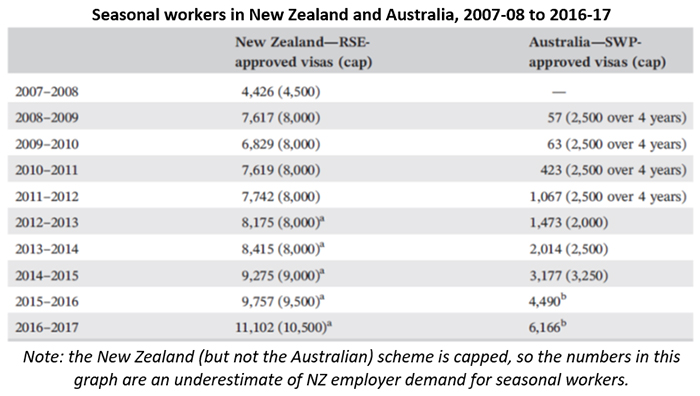 First, New Zealand’s horticultural sector has a much stronger export orientation. As a result, the sector is more focused on quality and compliance, as stories of worker exploitation risk the loss of export markets.

In 2012, there were 1,516 New Zealand agricultural producers accredited to the European Global Gap code of practice, but only 153 in Australia. The code covers, among other things, the treatment of workers, and is independently audited.

In contrast, Australian farmers are producing mainly for the domestic market, with little external scrutiny of workplace conditions and employee rights. They are focused primarily on costs rather than reputation.

Second, collective action is easier in New Zealand. New Zealand’s horticultural sector is much better organised than in Australia, and has a single peak body. It played a leading role in developing the RSE, and employs someone to promote it.

In Australia, due perhaps to greater geographical dispersion and product fragmentation, there are multiple state and product organisations, and the SWP has been left mainly to the government to develop, run and promote.

Third, the costs of regulatory compliance are also lower in New Zealand. Australia’s minimum wage is significantly higher than New Zealand’s, which creates a stronger incentive to avoid it.

Australia also has a weaker enforcement regime, making it less likely that you’ll be caught if you cheat. This is again due to the tyranny of size, but also because Australia has put less effort into developing a licensing regime for labour hire companies. This situation is now changing, which explains the growth of the SWP in recent years (as noted below).

Fourth, while Australia’s and New Zealand’s backpacker and seasonal worker schemes are very similar, there are subtle differences in their design, history and implementation, which have made a difference.

New Zealand introduced the RSE in 2007. At the time, Australia wasn’t prepared to follow suit. Instead, in response to farmers’ complaints about labour shortages, it introduced the second-year backpacker visa to funnel backpackers into agriculture in their first year with the offer of a second-year visa.

This proved to be a very strong incentive. It led to a large increase in the number of backpackers working on farms. This, in turn, ended the horticultural labour shortage, and reduced the incentive to use seasonal workers when they became available from 2009.

New Zealand only introduced a backpacker visa extension in 2009, after the RSE had been bedded down, and it gave a much weaker incentive to work on a farm: the extension was only for three months (not 12 as in Australia) and it only allowed further farm work during that period (the Australian extension involves no work restrictions).

Finally, there is the simple fact that Australia simply attracts far more backpackers than New Zealand, making the potential pool of backpacker farm labour that much larger. In the 2017-18 financial year, Australia had 210,000 backpackers while New Zealand had only 70,000.

Conversely, New Zealand has a larger Pacific diaspora, which may have facilitated greater uptake of the RSE by Pacific Islanders (though this does not explain Vanuatu’s participation, given the country’s small diaspora in New Zealand).

All of these factors explain why New Zealand’s RSE has left Australia’s SWP behind. But, interestingly, the analysis also helps explain the recent rapid growth in the SWP.

A domestic backlash against exploitation of backpackers here in Australia is starting to lead to greater efforts to regulate the sector. Supermarkets are at last asking growers to demonstrate good treatment of workers, a growers’ representative body is promoting a Fair Farms accreditation process and state governments are starting to license labour-hire companies. These changes, which are occurring as the agricultural sector faces reported labour shortages, favour regulated options such as the SWP.

In absolute numbers, backpackers employed in horticulture will continue to leave seasonal workers far behind in Australia. But the New Zealand experience shows that such ‘crowding out’ is not inevitable. There are benefits as well as costs to using a labour source that is more regulated and less easily exploited.

Dr Matthew Dornan is a research fellow at the Development Policy Centre in Crawford School of Public Policy at The Australian National University.

Dr Richard Curtain was appointed March 2018 to a full-time research fellowship, focusing on Pacific labour mobility. His doctorate is from ANU in Geography, with a thesis on urban migration and urban unemployment in Papua New Guinea.

Stephen is Professor of Economics at ANU Crawford School of Public Policy and the Director of the Development Policy Centre.