To prevent the world crossing a climate tipping point, we have to start crossing some social ones, Penny D Sackett and Will Steffen write.

Last week, thousands of Australian school children abandoned school to protest for strong, immediate climate action. This week, thousands of global climate negotiators and their staff have begun the 24th Conference of the Parties (COP24) to the United Nations Framework Convention on Climate Change (UNFCCC) in Katowice, Poland.

Can the school kids count on COP24 to avert the climate crisis?

If history is any guide, no.

A UN press release from an earlier COP summit quotes Angela Merkel: “According to current scientific knowledge, the existing commitments will not solve the climate change problem.”

Her quote is from the very first 1995 COP in Berlin and is a reminder that very little has changed. Emission reduction commitments considered in 1995 to be insufficient to avoid dangerous climate change have still not yet been met, a quarter of a century later.

Beginning in 1990, five major Assessment Reports have been produced by the Intergovernmental Panel on Climate Change (IPCC), which advises the UNFCCC. Each IPCC report identified carbon dioxide (CO2) as the most important greenhouse gas contributing to global warming, and human combustion of fossil fuels as the dominant cause of its increase in the atmosphere.

Each report successively provided more evidence of human-induced climate change, more risks, and a growing mismatch between the trajectory of human greenhouse gas emissions and the paths that would be necessary to limit the risks.

Ten years ago, the IPCC concluded that in order to keep the average global temperature rise between 2.0 and 2.4 degrees Celsius at the end of the century, global emissions would need to peak between the years 2000 and 2015, falling rapidly thereafter, and thereby holding atmospheric CO2 concentration between 350 and 400 parts per million (ppm).

And yet, at the end of 2018, global greenhouse gas emissions continue to rise, and the targeted CO2 stabilisation range has been exceeded, with average yearly concentrations now 405 ppm or higher. 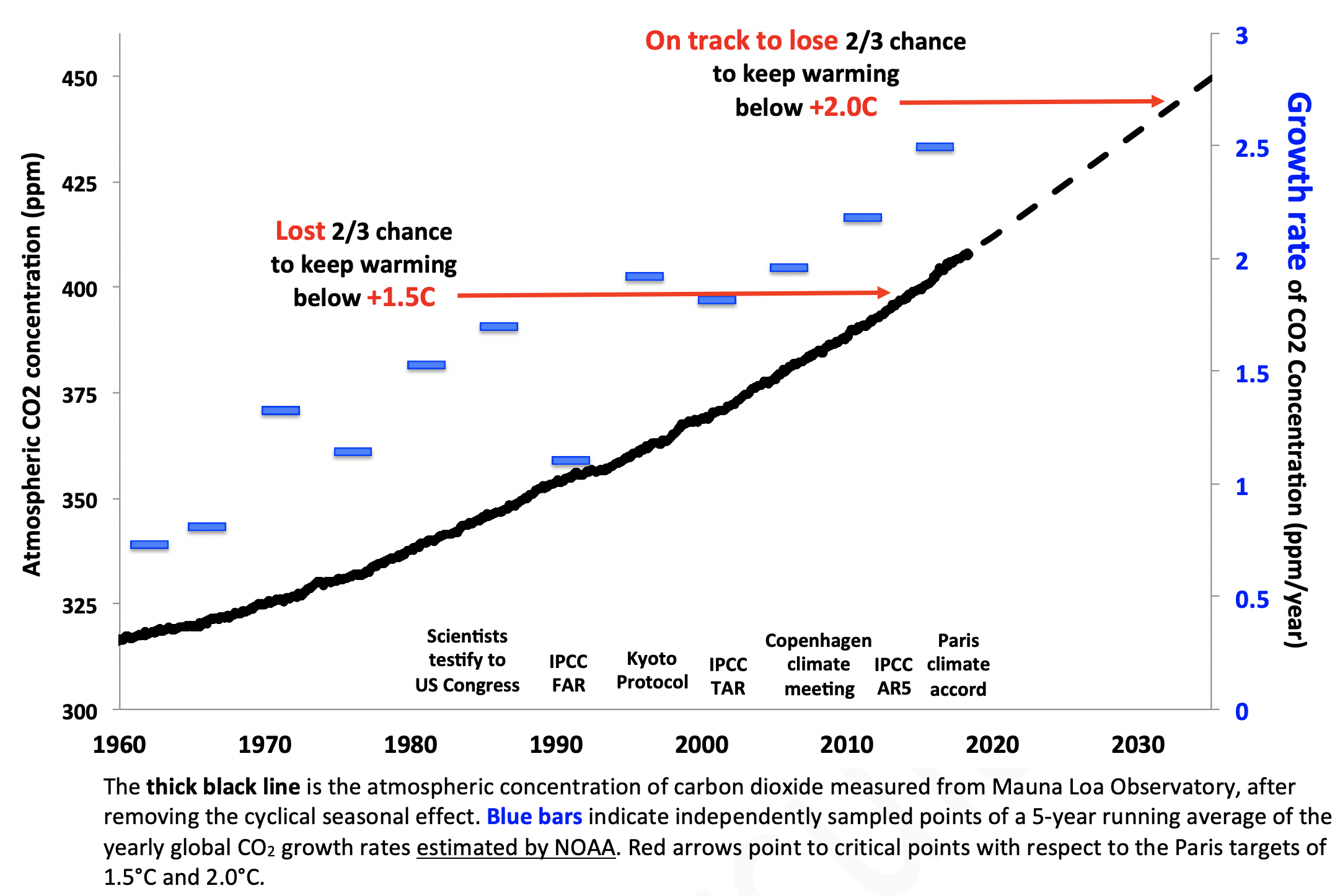 The world has probably already missed the 1.5 degrees Celsius target

In October, the IPCC released a confronting special report indicating that any pathway with a reasonable chance of limiting warming to no more than 1.5 degrees Celsius requires far-reaching transitions in energy, agriculture, transport and industrial sectors at a scale that is unprecedented in human history.

According to the report, in order to have at least a two-thirds chance of meeting the 1.5 degrees Celsius target, the world’s ‘carbon budget’ from the beginning of 2018 onward is only 155 GtC (billion tonnes of carbon).

Accounting for the approximately 10 GtC emitted by human activities throughout 2018, this leaves a budget of only 145 GtC for the future. The uncertainties surrounding the carbon budget are similar in size to the remaining budget itself, meaning that the budget could already be spent or it could be more than doubled.

One type of uncertainty – carbon feedbacks in the Earth System – operate in only one direction: they reduce the remaining budget. Permafrost thaw was the only carbon cycle feedback included in the IPCC 1.5 degrees report, which would reduce the carbon budget by about 30 GtC.

However, a more complete range of carbon feedbacks result in a budget reduction of 170 GtC, leaving the 1.5 degrees carbon budget in deficit by 25 GtC. Consequently, it is quite possible that by 2015 humanity had already consumed its 1.5 degrees budget.

A similar analysis indicates that the situation is not much better for the 2 degrees Paris target. When the most recent carbon feedback results are included, the remaining 2 degrees carbon budget will be expended by about 2030, at current rates of greenhouse gas emissions.

The simple, ignored, fact is that we cannot decrease greenhouse gas emissions by continuing to increase them, most notably by developing still more reliance on fossil fuels. This is the elephant in the room.

A first and necessary step to limiting global warming to under 2 degrees Celsius is a complete ban on any new fossil fuel development, anywhere on the planet, effectively immediately. Current fossil fuel reserves already being exploited contain more than enough carbon to consume the remaining carbon budget for the 2 degrees Paris target.

We already have the means to take this step. Renewably sourced energy for homes, industry and transport are already yielding economic, social and employment benefits compared to fossil-fuel energy. Their uptake is accelerating and costs are dropping exponentially. Simultaneously, a focus away from the private good toward the broader public good can support a just and planned transition for the less privileged and for workers in the fossil fuel industry.

Leadership and courage from nation-states will be required – yes – but also from subnational governments, cities, businesses, communities and individuals, regardless of the reluctance of others.

Our next actions will shape the future of the Earth and its inhabitants for centuries – potentially millennia. A massive U-turn must be executed in the spectrum of human activities, technologies, values and governance systems that lie behind the unrelenting increase of greenhouse gas concentrations.

The climate has tipping points beyond which lies an irreversible path to a new state. To prevent that outcome, the crossing of a social tipping point is now required to place us irreversibly onto a safer climate path without fossil fuels.

Perhaps those activist Australian school children illustrate that society is moving toward the tipping point to a safer climate – regardless, or even in spite of, outcomes from the Katowice climate summit.

Will Steffen is Emeritus Professor at the Fenner School of Environment and Society, The Australian National University, and Councillor with the Climate Council of Australia.