If you have driven around Jakarta in the last month you might have noticed things were a bit less noisy, or the roads slightly less crowded, or the air a bit clearer.

These changes could be because the government of Jakarta has implemented a trial ban of motorcycles along two main roads in the centre of the city – the Jalan Medan Merdeka Selatan and Jalan MH Thamrin. The policy is an attempt by the government to overcome Jakarta’s congestion problems and encourage people onto public transport. The government will roll this policy out to other roads in Jakarta in the coming months.

The ban has prompted strong reactions, with some locals getting into a spin. Earlier in the month dozens of angry ojek (motorcycle taxi) drivers protested in front of Jakarta’s City Hall claiming the policy was harming their business.

Elsewhere in the city opinions are divided. Some argue that it is the best way to lessen congestion and encourage public transport use, while others say that restricting motorcycles along the road is simplifying the problem and it won’t help overcome Jakarta’s notorious congestion.

Many people argue that the government should find an alternative policy that reflects the principle of equality among citizens to use the road as a public facility. After all, they say, someone who uses a motorcycle has equal rights to access the road and they also pay taxes to build and maintain public roads. They argue that the principle of equality as an indicator of good governance isn’t reflected in the motorcycle ban policy. 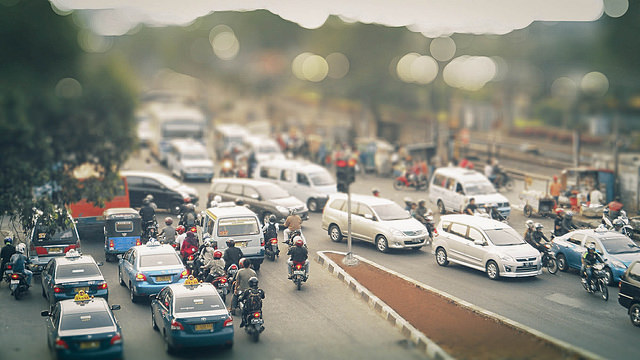 There are several policy instruments available to policymakers to lessen congestion, including a system of ‘command and control’ commonly used by the Indonesian government. In this system, the government sets regulation and the government undertakes the enforcement of the policy. If someone breaks the policy they are punished by a fine or other means. In Jakarta’s case that means fines for offending motorcyclists of Rp500,000 (AUS$49) for riding in the disallowed locations.

An alternative is a market-based instrument. In London, for example, the government uses a congestion charge as a policy instrument.

A better alternative policy to overcome congestion is using a market pricing system for roads. In this system, the government sells permits to access the road to motorists. The number of the permits issued by the government is based on what the government chooses as the ideal level of use for the roads.

Many economists argue that a market-based system of road pricing is the most cost effective system especially where you are implementing a policy which focuses on maintaining the capacity of the road rather than developing new infrastructure, which is what the DKI Jakarta Government is trying to do. This system can determine the real price a motorist is willing to pay to access the road with desired use level of the road as the limitation. Thus, slots to access the road are allocated to the people who can utilise the road with the highest benefit. The government as the provider of public transport will gain the highest value for a service that could be used to improve the quality of the road or reduce congestion through investment in road or transportation networks.

The government’s ban on motorcycles in Jakarta City is one possible solution to overcome congestion.

A smarter solution to lessen congestion would be to implement a market-based system on Jakarta’s busy main roads. That kind of system would be cost effective and offer equality among motorists to access public roads. Granted, the government’s start up costs for a scheme like this would be high, particularly in the analytical work and planning that would be needed to determine the amount of permits that will be sold or to develop instruments to monitor the price of slots. But it’s a plan that could deliver an effective solution to lessen the congestion in Jakarta and promote good governance on environmental policy. That sounds like a breath of fresh air to me.

Dadang J Mutaqin is an Asia and the Pacific Policy Society member and a graduate of Crawford School of Public Policy’s Environmental Management and Development Program, ANU. He works for the National Development Planning Agency (Bappenas) as a development planner in the Environmental Sector.