What explains the large disparities in education outcomes between the majority Kinh and ethnic minority populations?

The big difference in ethnic educational outcomes in Vietnam creates a raft of issues for the country’s policymakers, write Paul Glewwe, Qihui Chen and Bhagyashree Katare.

Like many former socialist countries, Vietnam has long had high levels of education compared to other low-income countries. According to Vietnam’s General Statistics Office, Vietnam’s primary school gross enrolment rate has been close to 100 per cent since the early 1990s, and its secondary school gross enrolment rate increased rapidly from about 32 per cent in the early 1990s to about 85 per cent in 2006.

However, there remain large disparities in education outcomes between the majority Kinh and the ethnic minority populations in Vietnam. Large ethnic learning gaps in Vietnam, measured by mathematics and reading test scores, have been documented in a number of studies, including an article we recently published in Asia & the Pacific Policy Studies (APPS).

Given the importance of education in determining adults’ socio-economic success, and the generally lower incomes of Vietnam’s ethnic minorities, these learning gaps suggest that today’s ethnic minority children will be poorer than today’s Kinh children in adulthood. Thus, a major policy challenge for the Vietnamese government, and for donor agencies active in Vietnam, is to understand the causes of these disparities and formulate policies that can reduce them.

There are five policy implications that might be helpful for the understanding of ethnic learning gaps in Vietnam, based on key findings in our APPS article, which analyses the determinants of these gaps among two cohorts of children (a 5-year-old preschool cohort and a 12-year-old school-age cohort), using the Round 2 Young Lives data collected in five Vietnamese provinces in 2006.

First, ethnic learning gaps are already large before children start primary school. This suggests that preschool and even nursery factors may play a role in generating these gaps. But our study found that time spent in preschools and nurseries has little explanatory power in determining (math and vocabulary) test scores of the preschool cohort. Yet it is possible that the quality (e.g. qualifications of staff) of preschools and nurseries could vary between Kinh children and ethnic minority children. Alternatively, it is also possible that differences in the home environment explain most of the gap in scores at age five. Further research is needed to determine the causes of this gap. 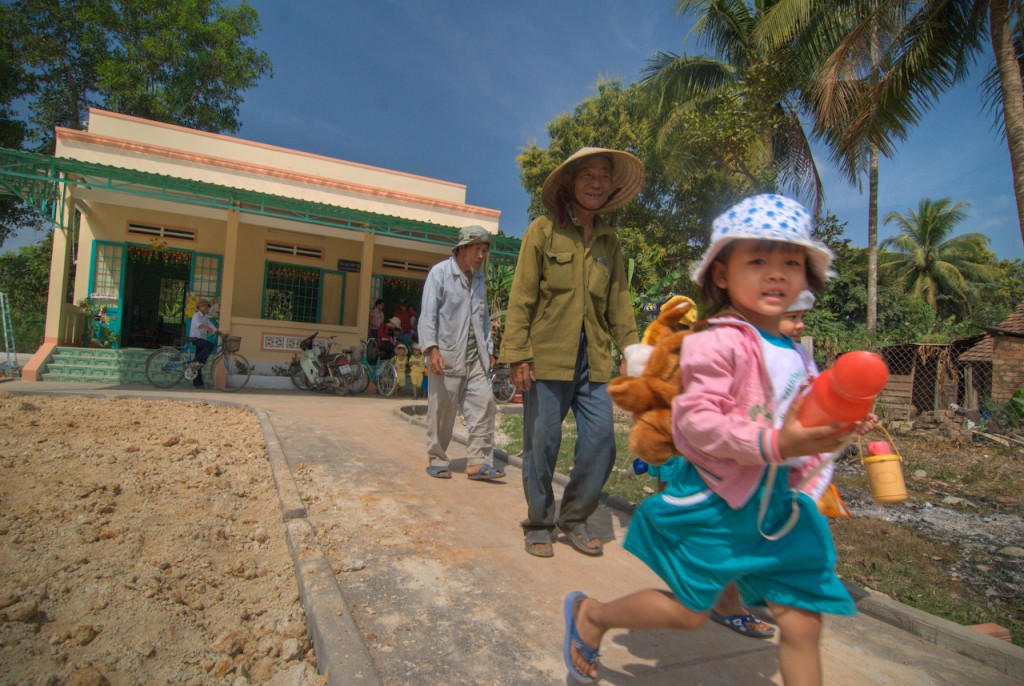 Second, more attention should be paid to the role that language plays in generating ethnic learning gaps. The Young Lives data indicate that Vietnamese-speaking ethnic minority children had much higher math and reading scores than their non-Vietnamese-speaking counterparts. A 2009 World Bank study argues that lack of bilingual instruction and lack of ethnic minority instructors in schools with ethnic minorities are barriers to learning among ethnic minority students. When we compare children living in ethnically mixed communes, these differences became smaller, which suggests that it is really differences between communes, not language itself, that matter.

Perhaps one benefit of living in an ethnically mixed commune is that ethnic minority children can interact with Vietnamese-speaking children, thereby obtaining much more facility in Vietnamese at an early age. Clearly, more research is required on the role of children’s mother tongue, and the mother tongue of their peers, to better understand the reasons why ethnic minority children fall behind.

Third, reducing ethnic income gaps may be an effective way to reduce ethnic learning gaps. Decomposing the overall learning gaps into gaps due to different ‘endowments’ and gaps due to different ‘returns to endowments’, we found that that among the school-age cohort, Kinh and ethnic minority children are equally capable at ‘converting’ household income into higher test scores, and the higher income of Kinh households explains 15 per cent of the gap in math scores and 19 per cent of the gap in vocabulary scores. Interestingly, for the preschool cohort, while ethnic minority children live in poorer households, they are more successful in ‘converting’ what little income they have into higher test scores.

Clearly, further progress on understanding the causes of the Kinh-ethnic minority learning gaps is needed to formulate better policies.

This piece is based on a paper by the authors published in Asia & the Pacific Policy Studies. This article is a collaborative publication with New Mandala, the premier website for analysis on Southeast Asia’s politics and society.

Paul Glewwe is a Distinguished McKnight University Professor in the Department of Applied Economics at the University of Minnesota.

Dr Qihui Chen is an assistant professor in the College of Economics and Management at the China Agricultural University.

Dr Bhagyashree Katare is an assistant professor in the Department of Agricultural Economics at Purdue University, West Lafayette.