How football has become a subtle but strong diplomacy tool

It would be really interesting to see FIFA President Gianni Infantino’s burgeoning air miles account, which would inevitably reveal details of a man who spends his time shuttling between countries across the world. And there are some more miles to come, as he will soon be travelling Stateside to attend FIFA’s next Council meeting in Miami due to take place on the 14th and 15th this month.

Extensive travel is to be expected when working for FIFA; after all, Infantino is the leader of world football and of a governing body that has a membership numbering more than 200 nations. On top of this, there’s an upcoming FIFA presidential election in which the Swiss-Italian sport’s official will stand, albeit unopposed.

Canvassing and lobbying are on the agenda, and have been for some time. It’s a classic example of ‘retail politics’, where strong campaigning from the day a leader assumes power reduces the likelihood of credible opposition emerging.

However, Infantino keeps appearing in unexpected places, many of which seem unrelated to the machinations of a governing body’s electoral process. For instance, over the last year or two, he has spoken at a G20 Summit and the World Economic Forum in Davos – an impressive roster of visits for someone who represents groups of people involved in kicking a ball.

Indeed, such has been Infantino’s predisposition for travel that, last year, a New York Times journalist put in an information request to FIFA. The journalist asked for a record of the official’s flights in the preceding months, though access to this information was refused by the Zurich based governing body.

Whilst the governance of FIFA, and issues of security and confidentiality, may have dictated the organisation’s response, that the journalist’s enquiry was rebuffed merely adds to the mystery and intrigue surrounding it. On this basis, we decided to undertake a social network analysis of the most visible overseas visits made by Gianni Infantino during his tenure, specifically those involving meetings with political leaders. 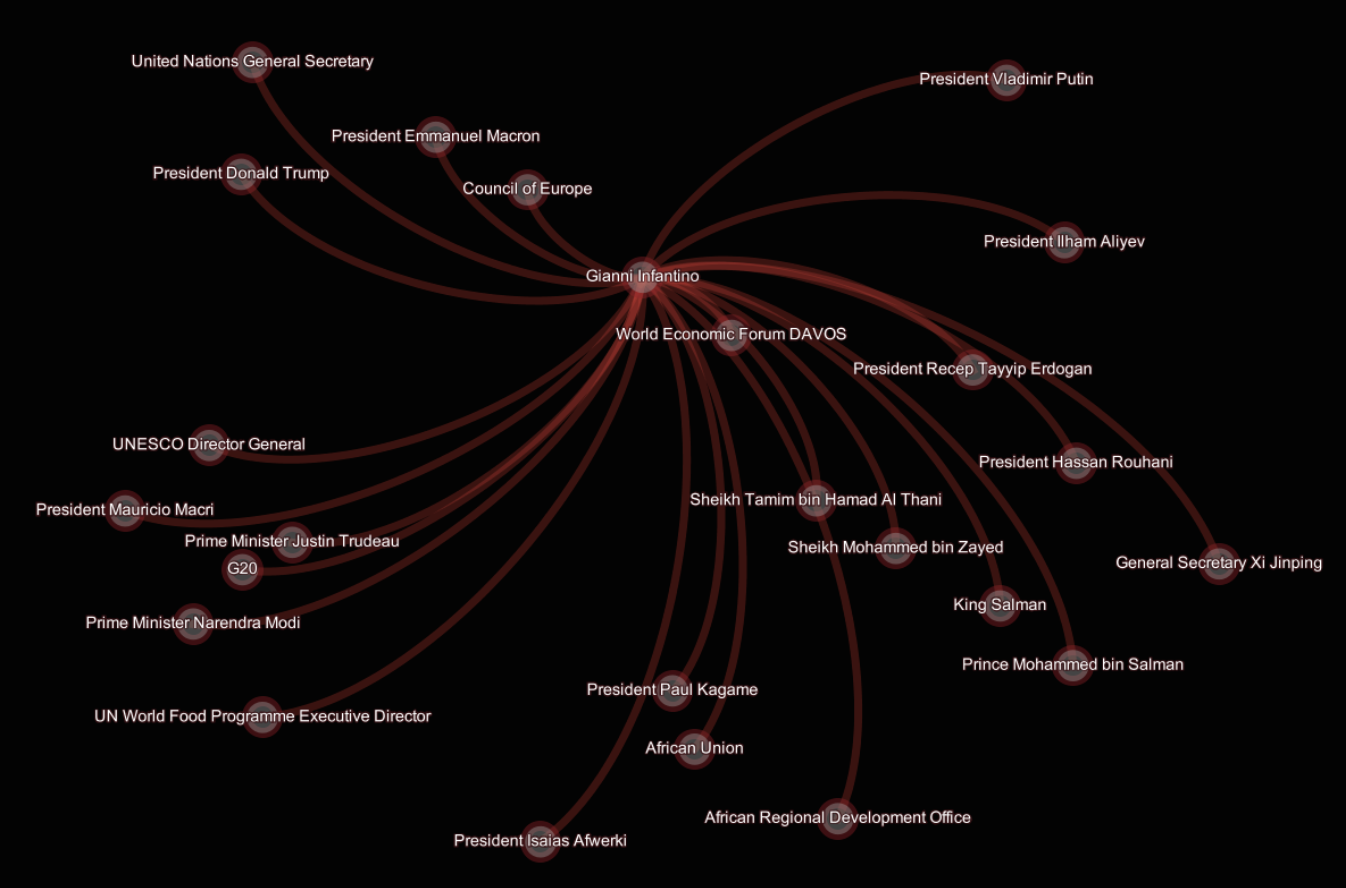 What becomes immediately apparent from this analysis is just how far and wide Gianni Infantino has travelled. In one sense, this reveals something about the power of football, as the world’s top politicians have opened their doors to him in places ranging from the United States in the West to China in the East – and, it seems, many others in between.

And there are some unlikely bedfellows residing in the network – people who normally otherwise seek to distance themselves from one another. The United States’ president Donald Trump and his Iranian counterpart Hassan Rouhani are unlikely to be exchanging warm bonhomie any time soon. Meanwhile, Qatar’s Emir, Sheikh Tamim bin Hamad Al Thani, and Saudi Arabia’s Prince Mohammed bin Salman do not see eye-to-eye on anything these days either.

This raises all manner of questions about the network, its configuration, and how we interpret the travel patterns of a man who seems to get everywhere. Moreover, it shines a light on how Infantino seemingly imagines himself as a leader and on how he envisions football’s role in the world.

Notwithstanding the electoral demands of visiting his constituents, Infantino’s travel visualisation reveals something about the breadth of activity in which a FIFA president is expected to engage. Trips to the United Nations and UNESCO suggest that the sport continues to play a role in areas including health and education – something the governing body should be commended for supporting.

But there are clearly economic and political dimensions to Infantino’s work too. For instance, Europe has a disproportionate influence on football, notably via its commercial and financial strength. This possibly explains the Swiss’ engagements with the likes of the Council for Europe.

There are links to Africa as well, a continent where there have always been issues pertaining to football’s development and to its financial sustainability.

Indeed, for Infantino’s predecessor, Sepp Blatter, Africa constantly proved to be something of an Achilles’ heel. Several corruption scandals involving African football officials ultimately contributed to Blatter’s downfall and to a series of legal actions in which FIFA has been embroiled.

Yet there are two particularly interesting axes in Infantino’s recent travel history that warrant special mention. One that stretches from Zurich to Beijing, and another that radiates outwards from Qatar, pulling in Turkey, Saudi Arabia, Iran, and Russia. In assessing each axis, there are indications of what’s to come at the upcoming FIFA Council meeting, at future tournaments, and in terms of how Infantino leads world football.

A visit to meet China’s President Xi Jinping is hardly a surprise, as China is maintaining a stealthy pursuit of its vision to become a leading FIFA nation by 2050. Demographically, the country’s sizeable population alone could sustain football’s future global popularity.

Equally, Chinese investment into FIFA tournaments, via a series of highly lucrative sponsorship deals, has helped ease the governing body’s financial concerns of recent years. Hence, whenever Infantino meets Xi and shakes his hand, one senses an implicit bargain between the two of them.

The significance of Qatar in the travel network, and presumably in terms of the FIFA president’s worldview, is intriguing. As the 2022 World Cup draws closer, Qatar remains locked in an intense feud with its near neighbours, most notably Saudi Arabia. This has seen the government in Doha draw closer to Iran and Turkey, with Russia standing by waiting in the wings. Saudi Arabia, on the other hand, has remained close to the United Arab Emirates, to Israel and, at least until Jamal Khashoggi’s death, the United States.

Seemingly no coincidence, then, that Gianni Infantino has travelled to meet the leaders of most of these countries. At the same time, FIFA’s president has proposed the move from a 32-team Qatari World Cup to one of 48 teams. The issue is set to be discussed at the Miami get-together.

However, a 48-team tournament would be problematic, as the small Gulf nation does not have the capacity to host an enlarged tournament and so, many assume, will have to co-host the tournament.

Enter Infantino and his shuttle diplomacy. One suggestion is that he has been seeking to ascend to a geopolitical peacemaking role to broker a deal between Qatar and its adversaries. Some have even gone so far as to suggest that, if FIFA can crack this conundrum, then football will become the recipient of a Nobel Peace Prize.

Fanciful thinking maybe, but, in that case, the FIFA president’s strategic recent navigation of the world suggests that something is afoot. His travels have been uncharacteristic, which suggests that the imminent Council meeting could be a colourful one.