Good food policy in Indonesia is about much more than growing rice; it requires helping the poor access food

If you are looking for some good news in a world saturated by the media’s messages of misery, then you could try reading a recent UN report.

The Food and Agricultural Organization of the UN (FAO) tells us that in many parts of the world far fewer people now live in absolute poverty. This includes Indonesia. In 1990 the FAO estimated that 36 million Indonesians were malnourished; now it calculates that there are only 19.4 million.

Indonesia almost achieved its Millennium Development Goal of halving the number of undernourished people by 2015.  Yet food poverty and child malnutrition remain an enduring problem. For example, a UNICEF report noted that 37 per cent of Indonesian children still suffer from stunting, a measure of chronic malnutrition.

After his election, President Joko ‘Jokowi’ Widodo announced plans to tackle Indonesia’s vexing food, land and agricultural problems.  Indonesia wants to be food self-sufficient within three years.  There are plans to open new farming areas, improve irrigation over one million hectares, and distribute seeds, fertiliser and farming equipment.  Planners will develop 750,000 hectares of food estates in Papua and 500,000 hectares in Kalimantan. 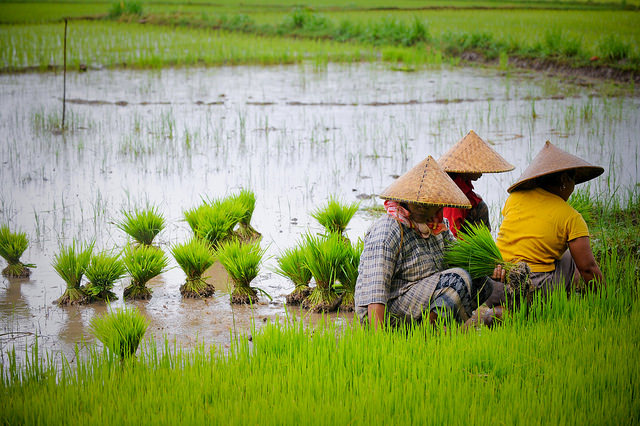 Thirty years ago, during the ‘Green Revolution’, Indonesia achieved rice self-sufficiency. However, beset by many problems, Indonesia is now once again a rice importer. Rice self-sufficiency is a matter of national pride, and the need to import rice poses a political problem for the president.

But when Indonesia closes its rice markets to imports, this can push up domestic rice prices.  Even as investors find new ways to make money from farming, journalists write of the yawning gap between rich and poor.

Among so many competing priorities, decision makers need to find a good reason for choosing which way to go. Should policy aim to achieve self-sufficiency in rice at all costs, to strengthen the ability of the poor to access food within diversified economies, or to provide security of tenure to rural farmers and to enhance their food production on their own land? It may be difficult to chase all these rainbows at the same time.

Food policy presents a problem like Indonesia’s legendary Simalakama fruit.  According to an Indonesian proverb, ‘If you eat the fruit your father will die, if you don’t eat it your mother will die’.  No matter what policymakers choose, they may lose something precious.

These dilemmas play out in the landscapes of the large island of Kalimantan.  Here planners have tried to develop rice mega-farms or ‘food estates’ in the lowlands.  But the new rice mega-farms need fertile land. Millions of people live in these landscapes, and local villagers claim customary rights without legal title.

Developers pocket permits for oil palm and mining projects here as well.  Some estimates suggest that oil palm investors now have licences over 15 million hectares and mining permits over 25 million hectares across Indonesia.  So the only place left for food estates is in marginal peatlands – where it is difficult to produce rice.

In the past the government found ways to help farmers on their own land without developing mega-farms.  Planners continue to pursue this practice. Nowadays, the agricultural agencies lack the budget and capacity of Suharto’s developmental era. The Green Revolution is over. New programs can help poor farmers in marginal areas of Kalimantan, but this may contribute only a little to meeting ambitious national targets.

Food policy is about much more than growing rice: it requires helping the poor access food. As a report from the UN Millennium Project noted, for most poor people, access to land is ‘a condition for the achievement of a decent standard of living.’

Oil palm plantations clear the agroforests of Kalimantan’s uplands. In these areas climate change exposes dry land farmers to the risk of harvest failures.  The climate risk can be acute, especially when severe El Niño events, such as that forecast for this year, hit the region. 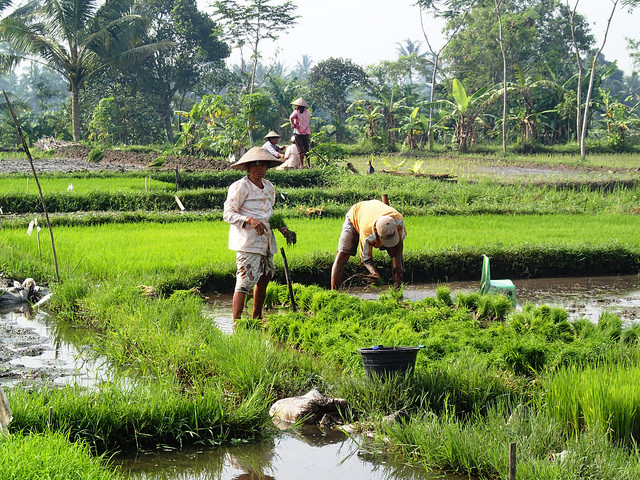 Farmers need diversified livelihoods. In the past they depended on resilient agroforests. As farmers lose access to land and other natural resources, oil palm plantations can create poverty and inequality.  They have also sparked land conflicts that, according to one estimate, range over 1.2 million hectares across Indonesia.

Palm oil plantations offer work to the poor.  But this work is lowly paid.  As plantations only need about one person for three hectares, plantations only employ some villagers.  Plantations are yet to offer a pathway out of poverty on their own, and new programs need to help poor farmers upgrade into oil palm or other profitable crops.

Jokowi’s government also has policies to recognise the rights of indigenous people. There are plans to redistribute 12 million hectares of land.  Providing tenure security to the poor is essential. However, the new initiatives face political and legal obstacles.  Reforms also need to ensure that plantation development occurs in line with international rules regarding responsible agricultural investment.

These are just some of the issues that will be addressed at the 2015 ANU Indonesia Update, Land and development in Indonesia.  The two-day conference will examine land governance in decentralised Indonesia and its implication for the environment and for people’s welfare.  It will also discuss the many possibilities for progress.

Enabling vulnerable farmers stuck in rural poverty to use their own land more effectively continues to be critical.  Land may offer an essential safety net when no other is available – until effective social safety nets are rolled out and farmers can find well paid off farm work.

Food insecurity at the household level poses prickly land and livelihood dilemmas. Determined efforts to understand and to address such local dilemmas will provide hope to Indonesia’s rural poor.

This piece was also published on New Mandala.

John McCarthy is an Associate Professor at the Australian National University’s Crawford School.