From the Greek debt crisis to the volatility of the Chinese stock market, the world’s policymakers are being posed serious questions. But do they have the answers?

The bickering brinkmanship in Europe over Greece, and the bursting of China’s stock market bubble, has caused considerable volatility in global financial markets in recent days, all against the background of the threat by the US Federal Reserve to start to raise interest rates soon.

In all cases the global economy has been thrust into unchartered waters, but generally increasing the risks that there could be a significant negative impact on global growth. Governments and policy authorities have little relevant experience on which to draw, so it will very much depend on just how well they manage it.

In terms of Greece, it is significant that neither Europe as a whole, nor Greece in particular, really want Greece to leave the Euro. Moreover, there are no ‘exit provisions’, such that if Greece were to be forced out, it would probably have to exit the European Union as well.

This suggests that some sort of new bailout deal will be reached, eventually, but so far neither side really wants to blink first.

A major stumbling block is the intransigence of Germany, yet they have clearly benefitted the most from the Euro, by being able to develop a very strong export sector, operating with what for them has been an artificially low exchange rate, relative to where the Mark would have gone, if they had not formed the Euro.

They also have a very short memory of their own debt experience. Back in ’53 their post war debts were restructured, half being written off, and the maturity of the rest extended to 30 years. Indeed historically, they have a bad record in repaying their debts! 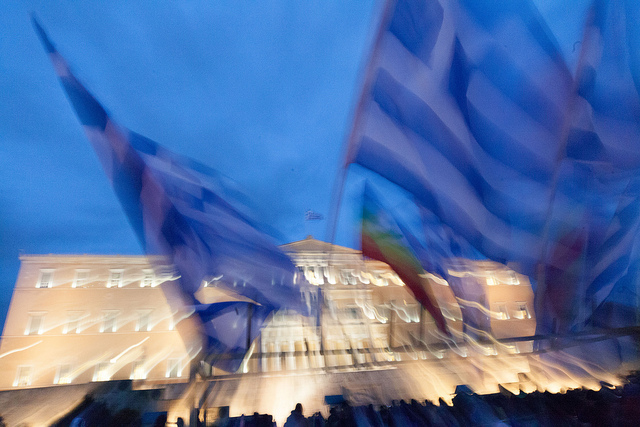 More broadly, Greece’s creditors, mostly now sovereign and international, will need to accept the reality that unless they are prepared to write off some debt, they could well lose it all.

However, the Greeks will also need to give considerable ground for a meaningful deal. Specifically, they will need to offer considerable structural reform in cleaning up their tax system and corruption, reforming the pension system etc., which will be particularly painful for them having already endured some six years of recession, seen their GDP shrink by about 25 per cent, with unemployment still 25 per cent, and youth unemployment double that.

Although the Chinese stock market has fallen by about one third in recent days, it actually boomed by some 120 per cent over the last year.

This has been a painful correction, especially as a lot of the share buying and property developments had been financed via the shadow banking system, that itself was also an accident waiting to happen, all at a time when overall growth had been slowing as the Chinese economy struggles to make a transition from one based on over investment, to one based on consumer spending and services.

However, the Chinese have considerable financial firepower to deal with such crises, and they have moved pretty decisively cutting interest rates, and reserve requirements on the banks and, most unusually, getting brokers to spend by buying shares to stem the collapse, and so on.

Yet, the jury is out, especially as the share and property bubbles are quite considerable.

Finally, there is still considerable uncertainty as to how soon the US Fed will move to raise interest rates, starting to reverse the quantitative easing (QE) that has flooded the world with liquidity since the GFC.

As QE seems to have had little effect on growth, but rather more on increasing debt and inequality, while creating asset bubbles, especially in shares and bonds, the risk is a significant shake out in stock, bonds and currency markets.

While global financial markets have been patting themselves on the back in recent days, about how well they have handled these pressures so far, I suspect there is still a lot more volatility to come, that must ultimately slow global growth. Handled badly, even precipitating another GFC.