The trio of troubles affecting Australia

Why, in an oversupplied market, is homelessness on the rise while home ownership and housing affordability continue to decline? Adrian Pisarski looks at what can be done to turn the trend around.

In an increasingly bizarre post-election world we are seeing a growing number of reports about oversupplied apartment markets, front page stories about homelessness emergencies and even fact files on the ABC mapping the changing geographical distribution of homeless people in Australia.

Since the election we have also seen new and disturbing research about the falling rates of home ownership in Australia. So what does all this mean and how do we proceed given these conflicting stories? Surely an oversupply of apartments ought to be just the thing to help housing affordability and ease homelessness?

Unfortunately, it’s not as simple as that, so let’s unpack some of the issues, starting with housing supply. The last report of the (now abolished) National Housing Supply Council in 2013 was consistent with previous reports in estimating a shortfall of housing available to, and affordable by, low-income households at over 500,000 properties. Since then we have had several years of increased supply exceeding that which is required to keep pace with population changes.

However none of the new supply is really affordable to low-income households and much of it remains unoccupied for a range of reasons including purchase by overseas investors who are parking capital in “safe” investments, investors utilising off-the-plan purchasing with fixed term rental guarantees built into the price, and the use of negative gearing and, perhaps more importantly, CGT discounts.

This means investors are purchasing for future capital gains instead of income, where rent returns are secondary or not important compared to the lower taxation of income derived from the sale of the property which is increasing at a far greater rate than other types of investment (or asset classes). (Click here to see chart). 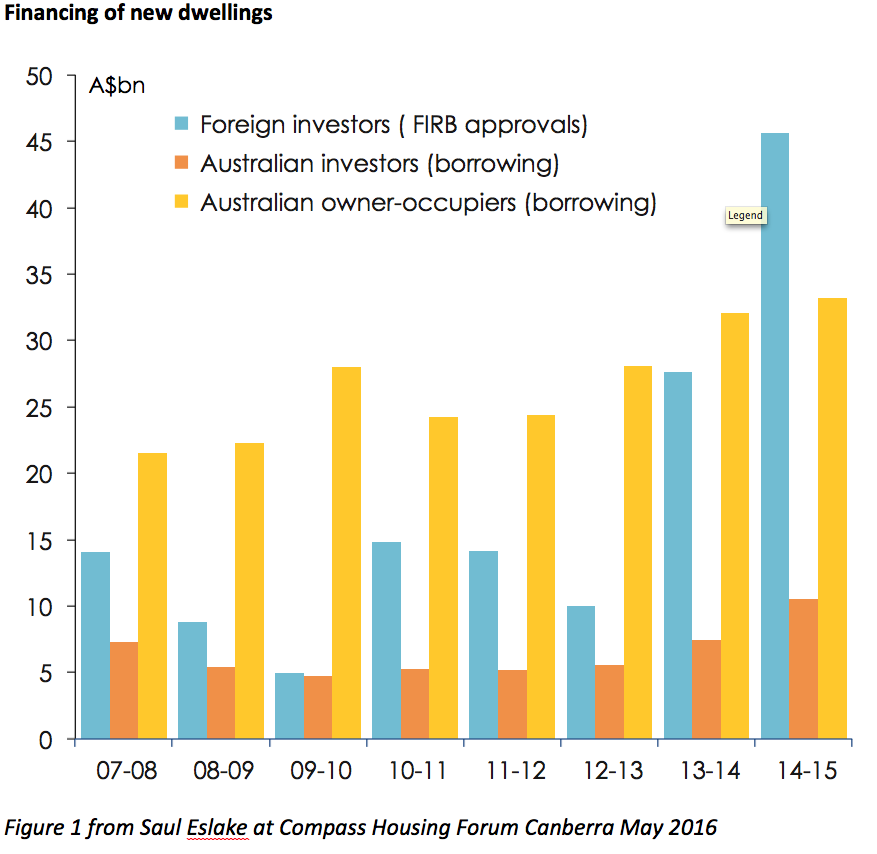 Even if many of these properties were available for occupation none of them would be affordable to low-income households. So new supply on its own is not the answer to these problems.

The declining rates of home ownership are disturbing for a number of reasons. Home ownership is the basis of most wealth creation in Australia: most small business is financed by home equity; our retirement income system is predicated on owning a home by retirement; and fewer owners puts greater pressure on rental markets.

The declining home ownership rate in Australia means there are 700,000 fewer owners today than there were in 2001, or to put that another way, 700,000 more renters. This is despite a growing population and a decline in overall poverty.

New evidence from the National Shelter, SGS Economics and Planning and Community Sector Banking’s Rental Affordability Index shows that low-income households are paying up to 85 per cent of their income to secure rental housing in our capital cities. Overall rental affordability is poor, and worst for low and moderate-income households, especially singles. It is a national productivity issue, not just a welfare one.

Australia is experiencing a profound change in its property landscape and it is reshaping our way of life. Plenty of prosperous countries around the world have far lower rates of home ownership and higher rates of renters, but they also have better security of tenure, more large-scale investors and different retirement income systems. Australia has profoundly insecure tenancies where households are generally on short leases (six to twelve months) at the end of which they can be evicted for no reason. Every move costs thousands and increases the chance of homelessness.

The changes we are experiencing are the result of a cumulative policy failure spanning five decades and we need profound and large-scale reforms to cope.

I am not arguing for a nostalgic return to quarter acre blocks of owned homes in ever-expanding suburbs, but a sophisticated policy response to the issues we face in the 21st century.

This needs to be coupled with dedicated supply strategies to increase affordable rental housing where it is required – close to infrastructure developments. Some encouragement along these lines has been suggested in the idea of introducing value capture for redevelopments along fast train corridors, but the idea also has merit when applied to other planning approaches like inclusionary zoning.

Central to solving this problem is having a national housing and homelessness plan and strategy that utilises our growing community housing industry and works with state housing authorities, treasuries and the full range of relevant portfolios (Cities, Infrastructure, Planning etc.) to grow a dedicated supply pipeline of rental housing that is made available to a range of low- and moderate-income households. It would be funded by using the money that currently inflates our housing markets by propping up small investors to speculate on property.

Rising homelessness, worsening housing affordability and declining home ownership rates present a complex and concerning problem, but one that does have a solution, provided there is enough political will from all parties behind it.