Is India wasting its sporting potential?

The future of Indian sport

Despite its massive potential, Indian sport remains too inwardly focused, denying the country a crucial opportunity to derive benefit from a worldwide industry in which it could be a major player, Simon Chadwick and Paul Widdop write.

India does not do things by halves. Bollywood movies, for instance, are often lavish affairs, funded by huge budgets and populated by casts of thousands. Although a hugely popular staple of everyday life in India, Bollywood movies can be complicated and confusing, with many elements heavily influenced by entertainment elsewhere.

Such observations seem resonant in the context of Indian sport, as well as cinema: the country’s biggest game, cricket, is a remnant of a previous, colonial-era which is deeply embedded in Indian life – epic in scale and awash with money. Cricket is India at its high performance best, swashbuckling and world-beating on the pitch, often a commercial behemoth off it.

It is no coincidence then that Indian sport’s biggest commercial phenomenon, the Indian Premier League (IPL), brings together two of the country’s great passions: cricket and entertainment.

The Twenty20 cricket format has revolutionised the sport, not just across the subcontinent but across the world, and the IPL is at its forefront. Similar competition formats can now be found in many other cricketing countries, with each trying to replicate its formula and in turn revolutionise a game deemed by some as somewhat in decline.

Benchmarking and bureaucracy in India

Having been deeply in love with cricket for centuries, India nevertheless seems to now be falling in love with football. Although football has long been popular, the recent formation of the Indian Super League has brought both a new focus upon and an impetus for the development of the country’s football product.

At the same time, replicated by others elsewhere in the world, India’s love of football is as focused on overseas teams as much as its own. The core and elite of the game remains very much in Europe, whilst others remain on the periphery looking in.

Not only are there numerous transnational fans across the country following the likes of Manchester United and Real Madrid, clubs themselves are taking India increasingly seriously.

Clubs including Arsenal and Bayern Munich have actively built a presence in India. Bayern now even has a player from India’s overseas diaspora, Sarpreet Singh – an Australian of Indian parentage.

In amongst the glamour, money and attraction of cricket and football, India has some hidden sporting gems, as well as sports that have often enjoyed a glorious past. Kabaddi is relatively unknown outside South Asia, yet according to some its origins date back to the Vedic period of ancient India. In the 20th century, the sport was formalised, eventually being played as part of the Asian Games.

Despite flashes of brilliance and the pockets of success, Indian sport is nevertheless a great enigma. The soon to be biggest country in the world may excel at cricket, but elsewhere it bafflingly underperforms. For instance, at the last summer Olympic Games in 2016, the Indian squad secured a paltry two medals – one silver, one bronze.

So why isn’t India taking its rightful place as a world sporting giant? Cynics point to ‘cricket fatigue’. Others believe that young Indians are more interested in what the rest of the sporting world has to offer than what is available at home.

Indeed, it was no surprise when the NBA announced its intention to enter the Indian market, with the Sacramento Kings playing the Indiana Pacers in an inaugural game at the end of 2019.

All of this is set against the backdrop of a stronger, more confident India, in which economic growth has continually extended beyond five per cent per annum. At the same time, India now ranks third in the global list of billionaires, behind the United States and China, with 134 people.

Mumbai is fast becoming an important global financial, technology, and entertainment centre. Whilst the likes of the Odisha state government have committed to ambitious sports development plans.

A social network analysis of Indian sport can help here, and as part of that, we have created the visualisation below. 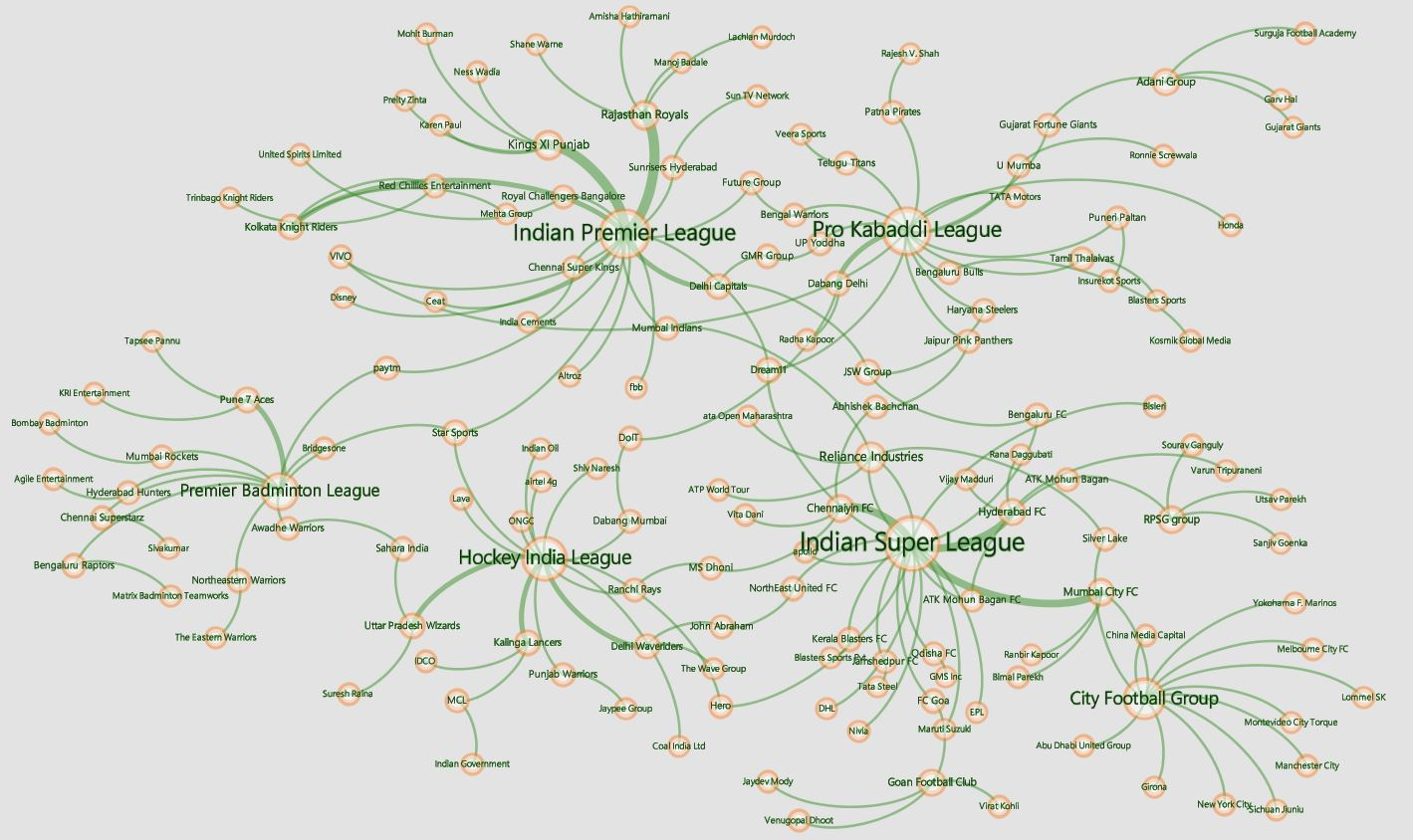 Whilst the size of the nodes depicted in the visualisation do not reflect specific financial details, the larger nodes do show where there are more ties, more commercial partners, and more owners involved in these sports.

Firstly, in spite of Indian sport’s stature, it is overwhelmingly domestically framed. That is, teams and clubs are largely Indian owned and Indian run, which stands in stark contrast to sport in the successful sporting countries of Europe and the rest of the world.

At the same time, it is clear that the likes of the broadcast content are typically targeted at Indian fans and consumers. Indian sport is essentially inwardly focused, denying the country opportunities to build revenues from overseas sources, and project soft power.

Secondly, the analysis shows that many team owners are drawn from a celebrity elite, with multiple examples of big-name cricketers and Bollywood celebrities involved in team ownership.

Whilst this has brought money and glamour to Indian sport, it appears to have embedded it inside a small celebrity enclave elite.

There is a notable exception: the appearance of City Football Group (CFG). CFG has recently announced plans to establish a football club franchise in Mumbai, explaining its presence in the visualisation.

Significantly, CFG is owned by the Abu Dhabi government, with American private equity investor Silver Lake also a shareholder. In turn, both Abu Dhabi and Silver Lake have just invested in India’s Reliance Jio, a telecommunications company. This could be an important moment for the development of Indian sport, and for India and its turn outwards.

Despite this exception, Indian sport overall remains a great enigma: popular and powerful at home, but with minimal reach or impact overseas. Performances in cricket are world-beating, performances at the Olympics are not. There’s big money involved, though questions remain about to what end. Indian sport in its own right is nothing short of a Bollywood style epic, but it is yet to be shown to the world.