An energy crisis, border blockade, poor transport infrastructure, and a failure to get relief to survivors of last year’s earthquake all highlight the sorry state of Nepal, writes George Varughese.

As the anniversary of 2015 Nepal earthquakes approaches, it is worth reflecting on the state of governance in Nepal.

The status of relief for quake survivors ought to be of considerable concern. Initially paralysed by the magnitude and rapid succession of the quakes in 2015, the government was then able to mobilise and coordinate security forces for rescue efforts and for public safety. In the several weeks that followed, it was also able to galvanize its civil service to work with so-called “ward citizen forums” to provide emergency cash assistance of about US$150 each to households whose homes were damaged and vulnerable to the monsoons, and then to add another US$100 each to help them cope with the winter.

Since that time in May-June 2015, however, the government has not provided much more relief delivery. The National Reconstruction Authority was only formally inaugurated in January 2016, a full nine months after the disaster. And this month, almost ten months after donors pledged more than US$2 billion for housing construction (out of more than US$4 billion for overall recovery), less than 1000 affected families received the first of three financial installments – totaling about US$500,000 of cash assistance – to begin rebuilding their homes. The government is yet to reach most of the 14 worst-affected districts, including those of Kathmandu valley. For better or worse, other nongovernmental and international efforts to assist the eight million quake-affected Nepalis have maintained momentum in relief and reconstruction efforts, and there is better coordination amongst them and between them and the government.

The blockade along the Nepal-India border has been an oft-repeated explanation for the inability to carry out relief and reconstruction activity. Further, the protests surrounding the new constitution are said to be preoccupying executive and legislative government and diverting attention from the core business of governing the country. A recent, perplexing explanation given by the home minister of Nepal implicates time-consuming governmental procedures concerning relief distribution and indicates that it would take another year to fully deploy relief efforts. Given all this, it could be reasonable to conclude that relief is not a priority. Worryingly, tremors and aftershocks abound, and Nepal’s shambolic state of preparedness and crisis management leadership cannot be depended upon if another serious earthquake were to occur.

Attempts to address the energy crisis are another issue, given that electricity has been unavailable 50-60 per cent of every day, for the past several years. The fourth energy crisis work plan in recent times was unveiled earlier this year with typical lofty ambition, ad hocism, and lack of strategic thinking about the viability of the measures proposed. 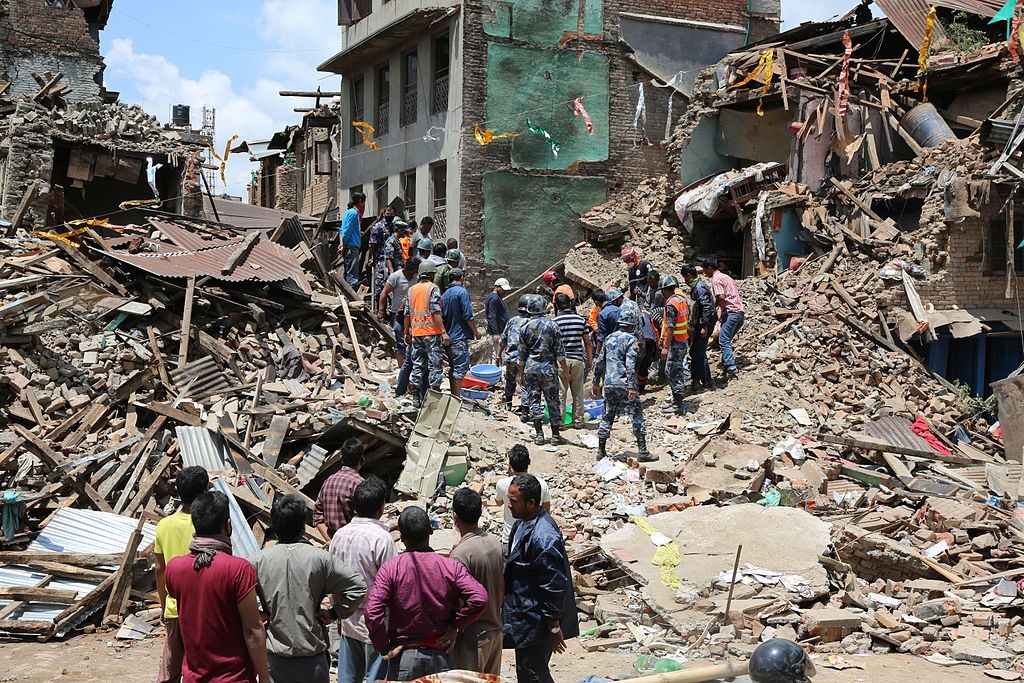 The state of transport infrastructure reflects competing political interests and irrational choices, resulting in a mélange of hastily constructed roads and unused airports. Even as Nepal struggles to improve road density from amongst the lowest in the world, whatever roads exist are poorly constructed and maintained – the capital city of Kathmandu being the worst. There is a growing, nationwide epidemic of road accidents, and civil aviation is a tragic mess.

Thus, most measures of state performance in 2016 indicate the dereliction of the duty to govern. Meanwhile, there are perverse examples of government’s considerable ability to mishandle restoration through hastily awarded contracts; inflate lists of survivors in order to provide cash to local political party cadres; perpetuate discrimination; condone violence against its own population, pursue ethnic and religious parochialism, and promote impunity through intimidation.

These are not signs of an absent or incapable state, but rather those of a rentier state, largely disengaged from the public and blithely engaged in the extraction of resources – from its natural endowments, the government treasury, and steadfast foreign aid. Over the past 20 years, rent-seeking opportunities created by the deliberate forsaking of elected local government, combined with policy uncertainty generated by more than 20 changes in government, have resulted in across-the-board politicisation of state apparatus. Politically, democratic development is in a steep dive and the firmly entrenched cross-party culture of collusion promises to continue obstructing accountable governance for at least another generation.

Economically, the long-term implications have been to exponentially increase levels of brain drain and capital flight, while disincentivising investment. Tragicomically, like other countries embroiled in a self-created politics of perpetual crises, Nepal has also enjoyed a year-on-year increase in foreign aid while demonstrating that its management of public expenditures and strategies is ever poorer.

While narrowly self-interested politics have driven the Nepal state’s failure to govern, politics offers a way out of the quagmire. Whether it chooses to join or topple the United Marxist Leninist-led ruling coalition or prefers to stay in opposition, the Nepali Congress, with its newly-elected leadership must have a two-point agenda of action:  to bring Madhesi, Janajati, and other protesting political groups to peaceful agreement on the constitution, and to conduct local elections as soon as possible. These actions have long-term consequences, and the Nepali Congress should take responsibility for leading them.

On its part, the ruling coalition must urgently drive parliamentary and legislative business. This should not be too difficult given that the President, Prime Minister, and the Speaker are all from the parties within the ruling coalition. Critically important business includes formulating and passing the requisite Rules on the Conduct of Business of the Legislature Parliament, convening the Hearings Committee in order to begin confirmation of judicial and other appointees, and amending time-critical legislation.

Concurrently, of course, the government must do what it was put in place to do: get relief to quake survivors before the next monsoons, reduce food and energy insecurity, provide public safety and security, and so on. With six deputy prime ministers, 22 ministers, ten state ministers, and two assistant ministers, excuses are unacceptable. Just govern!