The rising spectre of vigilantism in Indonesia

Indonesia is witnessing a striking upsurge in vigilantism. Sana Jaffrey delves deep into the reasons why society’s coercive capacity is on the rise and what it means.

The three consecutive Defence of Islam rallies in Jakarta were seen as a spectacular blow to President Joko Widodo’s authority. In addition to the scale of public mobilisation around the issue, observers were taken aback by the government’s ambivalence towards the brazenly coercive demands for the punishment of Jakarta’s Chinese-Christian governor on blasphemy charges.

The President eventually attended the 2 December 2016 rally, despite repeatedly vowing to resist mob pressure. Seated among the crowd, he was subjected to a condescending sermon on ‘justice’ by the leader of the Islamic Defender’s Front, a vigilante outfit. The national police chief also vacillated. After banning the event by issuing stern warnings against the disruption of public order, he relented in exchange for a shift in venue.

Following an extraordinary show of force in the nation’s capital, a series of mob attacks against religious minorities in Bandung, Yogyakarta and Surabaya have furthered fears about a mounting Islamist challenge to Jokowi’s government. There is no denying the sectarian dimensions of these specific events or their political salience. However, as a broader phenomenon where mobs either demand enforcement of the law to their satisfaction under the threat of violence or directly punish an alleged transgression, vigilantism is quite rampant in Indonesia.

Between 2005 and 2014, The National Violence Monitoring System (NVMS) database recorded 33,627 victims of vigilante violence in sixteen provinces that together represent 50 per cent of Indonesia’s population. (Click here to see table). 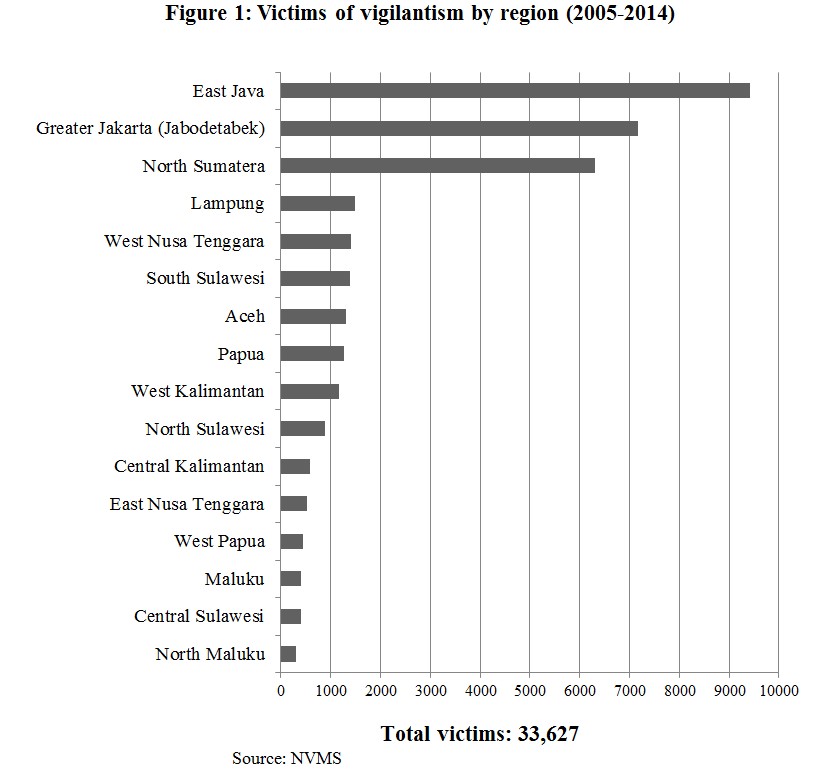 This estimate includes the 1,659 people who died. The rest sustained serious injuries.

To put these numbers in perspective, consider that communal riots and political clashes during the same period resulted in 10,433 victims, including 637 fatalities. Although large-scale violence tends to grab more national headlines, the cumulative impact of vigilantism is three times higher.

Several scholars have noted the sporadic lynching of alleged thieves and sorcerers during the New Order or even earlier under colonial rule. However, the frequency of vigilante violence has risen significantly since the Reformasi. In 1998, a series of witch-killings in East Java drew much attention to the issue but observers also expressed concern over the extraordinary rise in mob justice incidents in Jakarta.

A systematic study of these early transition years confirmed this upward trend and attributed it to rapid changes in local authority brought about by decentralisation measures. Consequently, it predicted a decline in vigilantism as communities adjusted to these reforms. Recent data from the NVMS indicates otherwise. Far from subsiding, the frequency of mob attacks actually registered a 25 per cent increase between 2007 and 2014. (Click here to see table). 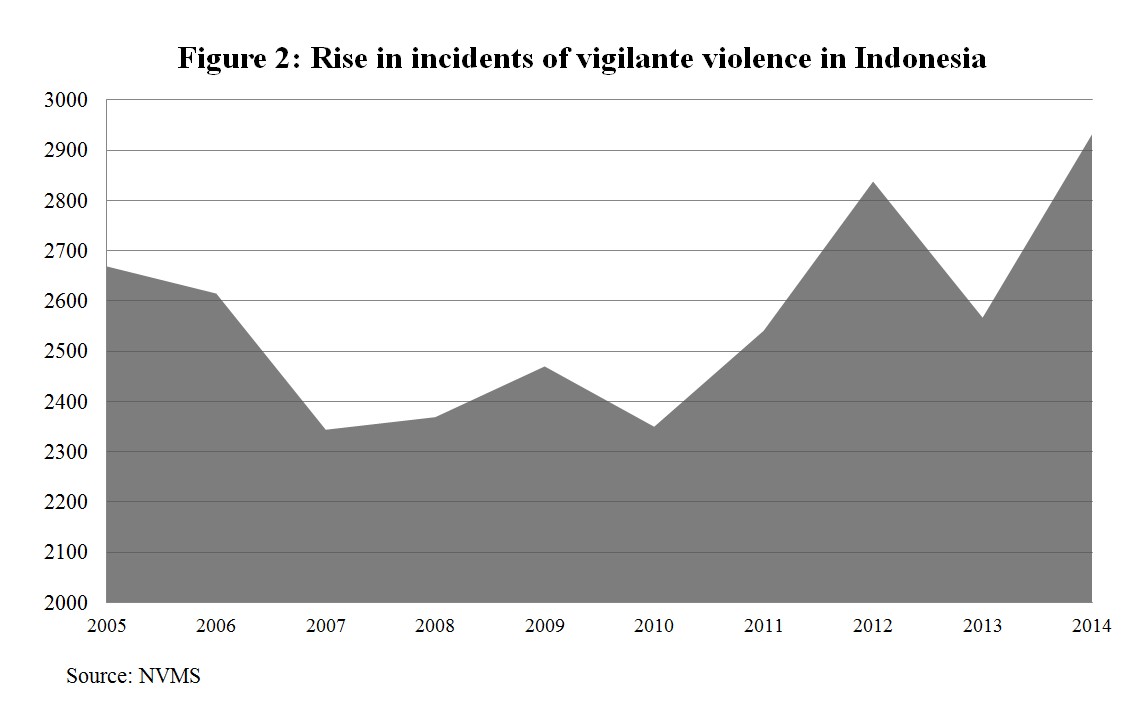 This trend is consistent with the rise and entrenchment of vigilantism in other new democracies such as Guatemala, Nigeria, the Philippines and South Africa among others.

Apart from a quantitative increase, the data also indicate a qualitative shift: vigilantism in democratic Indonesia is directed against a much broader range of transgressions. Attacks against sorcerers are relatively few, but petty theft is still the leading trigger for crime-control vigilantism. Alleged perpetrators of traffic accidents, rapes and assaults are also frequent targets.

Most remarkable, however, is the increased targeting of social and ideological ‘offenses’. These violations include fornication, adultery, homosexual relationships, and the sale of food during the fasting month. There is also a marked increase in mob raids to restrict the activities of minority religious communities and suspected leftist political groups. Overall, the data shows that an overwhelming majority of vigilante attacks respond to transgressions that are regulated by the formal criminal code. (Click here to see chart). 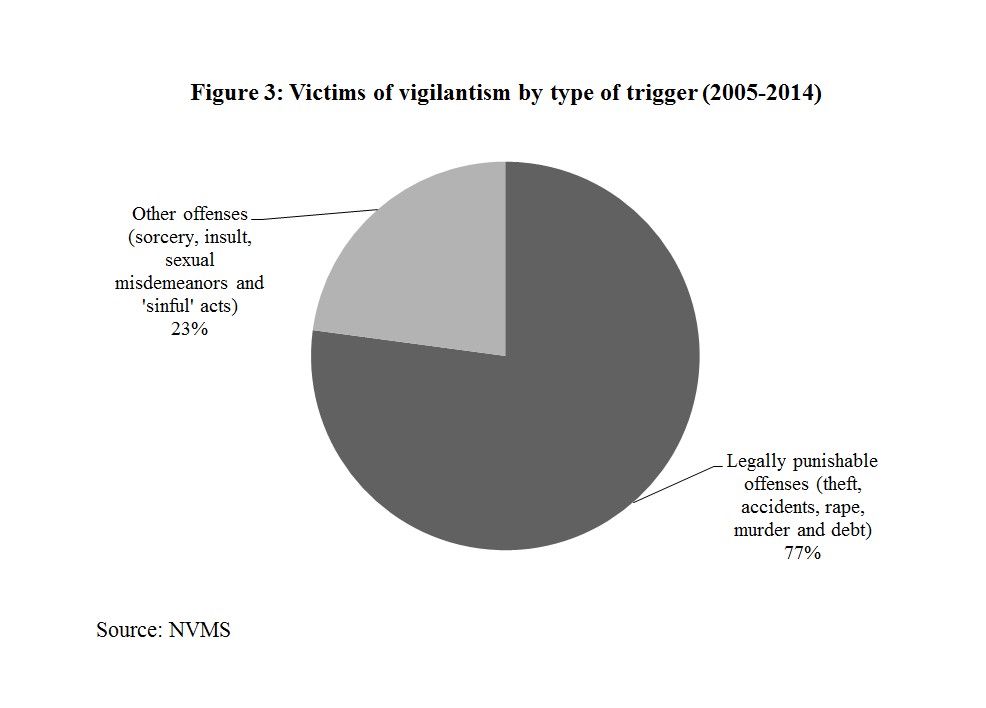 The specific mode of vigilantism varies. In the majority of incidents against alleged criminal activity, the suspect is a community outsider who is spontaneously punished by a citizen mob. In others, the accused is retrieved by ad-hoc search parties formed through text messages and social media, often from police custody as observed in the recent lynching in Nusa Tenggara Timur.

While crime-control vigilantism tends to be punitive, attacks against social and ideological offences seek to regulate behaviour. These incidents involve a pre-planned raid where the alleged offenders are asked to correct their mistake or repent. The immediate threat of violence always accompanies these demands, but actual physical violence is only used when the targets refuse to comply. While several studies have noted the prominence of mass organisations (ormas) or militias that have specific ideological commitments, the NVMS data shows that 88 per cent of all vigilante attacks are perpetrated by ordinary citizens who do not have a clear affiliation with such groups.

Much of the existing literature explains vigilantism as a result of low state capacity. This is also the popular narrative in Indonesia: people take the law into their own hands because the police cannot be trusted. Problems of public policing in the country are well documented and constitute an important background condition for the emergence of vigilantism. However, two empirical facts caution against viewing vigilantism as a simple substitute for state capacity.

First, vigilantism is on the rise despite a significant surge in policing capacity since the Reformasi. According to the Village Potential Survey, the number of police posts has nearly doubled from 4,130 in 1996 to 8,712 in 2014. In roughly the same period, the strength of police personnel increased from 250,000 to 400,000, bringing Indonesia’s police to civilian ratio closer to the international standard of 1:450 than at any other time in its history. Second, the data show that per capita levels of vigilantism are 74 per cent higher in Java and Sumatra than in Kalimantan, Maluku, Sulawesi and Nusa Tenggara. (Click here to see chart).

Even within these areas, more than half of the vigilante incidents occur in major urban centres. This spatial trend is surprising considering that Java and Sumatra have a higher state security presence and, consequently, much lower levels of riots, clashes and even violent crime.

Indonesia’s 1965 genocide is a global affair

This paradoxical rise of vigilantism in the context of growing police capacity can be traced back to the legacy of authoritarian state-building in Indonesia. Having led the country’s nationalist struggle, civilian militias played an important role during the 1965 communist killings. The New Order regime not only continued to deploy these organisations for dissent control purposes but also drew surveillance support from ordinary communities through elaborate civilian defence programs. In exchange for their cooperation in managing larger threats to the regime, the state allowed communities a certain level of discretion in dealing with transgressions against local order. Thus, society’s coercive capacity has grown in tandem with the state, not in its stead.

Democratisation has not altered this mode of joint order making between state and society in Indonesia. Even with a surge in numbers, formal law-enforcement agents still rely heavily on community support for managing serious threats such as terrorism and sectarian conflicts. Various government agencies have continued to groom both old and new militia groups. The Bela Negara program represents the latest efforts to appropriate civilian muscle for security. Consequently, incentives for tolerating vigilantism remain in place, even if these acts violate the formal legal code. It is not surprising, therefore, that disgruntled citizens can take the law into their own hands, while still enjoying impunity from investigation or arrest by state authorities. However, democratic reform has increased communities’ access to the state, enabling them to demand the interpretation and enforcement of the law to their satisfaction. As such, vigilantism has evolved from society’s way of occasionally bypassing the state into a popular coercive force that seeks to alter it.

This shift is visible in the state’s increasingly accommodative response to vigilantism. When the police are unable to dissuade vigilantes from conducting an attack, they legitimise the mob’s demands by facilitating the raid. Vigilantes are mostly punished when their target is the police force itself or when their actions could escalate into communal violence.

Lawmakers have followed the same pattern. Ongoing revisions to the formal criminal code explicitly cite vigilantism as the justification for the inclusion of sorcery as a crime, along with more stringent penalties for petty theft and sexual misdemeanours. Local executives are also quick to accommodate vigilante demands by issuing ad hoc regulations that restrict freedom of worship for religious minorities. In short, vigilantism is on the rise because it works.

This broader view of vigilantism in Indonesia has two implications for understanding recent events. First, the government’s ambivalence in dealing with the Defence of Islam protests cannot be attributed merely to a lack of presidential resolve or low policing capacity. In fact, it is a large-scale enactment of a routine interaction between the state and vigilantes that often ends with accommodation of the latter.

Second, despite the organisers’ claims, massive public mobilisation against Jakarta’s embattled governor has little to do with actual law enforcement. As in all acts of vigilantism, public and spectacular punishment is sought to deter others of Ahok’s ethnic and religious background from challenging the established social order. As the respected public intellectual Ahmad Syafi Ma’arif astutely noted, only a 400-year prison sentence would satisfy the mob.

Sana Jaffrey is a PhD candidate at the University of Chicago’s Department of Political Science and a visiting fellow at the Centre for Study of Religion and Democracy (PUSAD Paramadina).