Too little, too late

The Singapore Government has dipped its toes into the murky waters of price increases, but more needs to be done, write Asit K Biswas and Cecilia Tortajada.

The Singapore Government announced recently that the country’s water price will be increased in two stages. In doing so they opened the sluice gates to a torrent of mainstream and social media comments about its need, relevance and appropriateness.

Singapore last increased its water price in 2000, so almost a generation has grown up with no adjustment in water prices. Electricity rates, on the other hand, are significantly higher than water and are adjusted regularly. Thus, whenever electricity rates are modified, it is not news. However, when the water price is increased after 17 years, and the price rise is steep, it becomes big news.

The price increase will be ameliorated greatly with the increase of the GST voucher. Families in one- and two-room Housing and Development Board (HDB) flats will receive S$380 of rebates each year compared to $260, and families in three- and four-room HDB flats will receive $340 and $300 per year respectively, compared to $240 and $220. Consequently, on average, one- and two-room HDB households will have no increase in their water bills.

Consider some facts. First, unquestionably, the Public Utilities Board (PUB), the national water agency, has been an incredibly efficient institution. It has managed to increase its operational efficiency steadily as a result of which it has managed to balance its books until 2010, when it last made an operational profit of S$48 million. From 2011, it has been making operating losses which had to be made up by government grants. PUB losses have increased from S$36 million in 2013 to S$57.2 million in 2015.

Our studies indicate that between 2000 and 2014, because of inflation, the water price decreased by 25.48 per cent in real terms. In contrast, electricity and gas prices have increased at a rate slightly higher than inflation.

Water wars in the Philippines

Not surprisingly, a recent poll in the Straits Times showed that 75 per cent of Singaporeans had no idea what their water bill was.

Singapore now needs to change the narrative from an argument of cost recovery for domestic and industrial water supply, to one of managing a scarce, strategic and essential resource. For this, a profound societal mindset change is necessary as to how water should be managed in the future.

At present, about 50 per cent of water used in Singapore comes from Johor. Due to recent prolonged drought, storage at Linggui reservoir in late 2016 was at a historic low. On 9 January, Foreign Minister Balakrishnan noted in the Parliament that there is a “significant risk” that the reservoir may not have any water if 2017 turned out to be a dry year.

Fortunately, storage is now over 30 per cent, but nothing assures this may not change again in the coming months or years.

For Singapore, if the Linggui dries out, it will lose not only half of its water supply but also there may be a significant reduction in its NEWater production. NEWater is high quality recycled wastewater. If the supply from Linggui is cut by half, the question is how this would affect wastewater generated and thus NEWater production?

Add to this the potential uncertainty imposed by climate change which is likely to contribute to prolonged droughts, as being witnessed in many parts of the world, and a prudent strategy for Singapore will be to prepare for, not if but when, supply from Linggui will reduce to a trickle due to a prolonged drought. Over the last six years, we have regularly argued that it is not floods but droughts that Singapore needs to fear.

The current estimate of water requirement in Singapore by 2050 is expected to be significantly higher than what it is at present. Accordingly, efficient water management must receive priority national attention.

At present, in Singapore, both domestic and industrial water uses are far too high for comfort. Both need to be reduced very significantly by judicious use of pricing, economic incentives, public education and awareness and above all, behavioural changes.

Take domestic water use. In Singapore, it is over 50 per cent more than many of the other most efficient cites. Per capita daily consumption in Singapore is about 150 litres. In contrast, developed cities like Malaga, Tallinn, Leipzig and Zaragoza have managed to reduce their capita water consumption to below 100 litres. (Click here to see table). 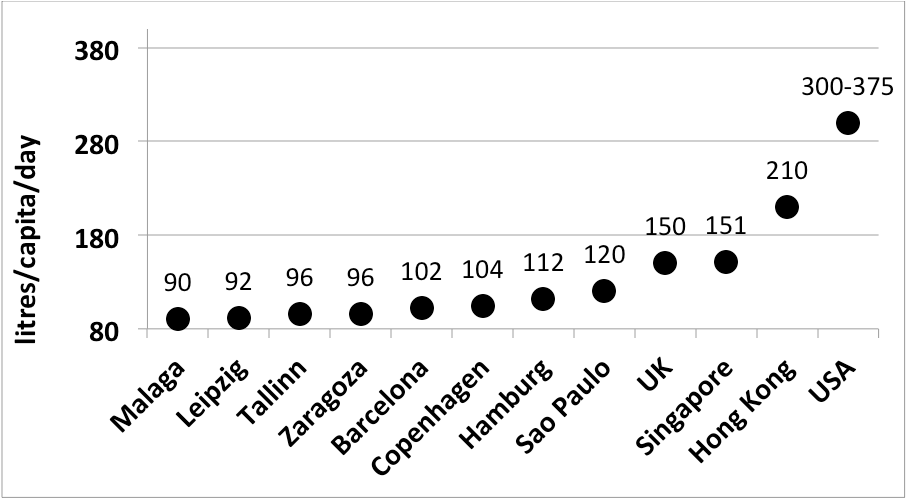 In the developing world, Sao Paulo, in the midst of a very serious drought, reduced average per capita daily consumption by an innovative pricing structure and good public awareness campaigns. If Paulista households reduced their water consumption they received a generous rebate of between 10 per cent and 30 per cent. Concurrently, if households used 20 per cent more than average, they had to pay a surcharge of 40 per cent.

True, these cities are in different climates and lifestyles do differ. However, water conservation practices are what counts, and a combination of economic instruments and attitudinal changes by developing conservation ethics, have ensured a more efficient use of water.

Singapore’s current targets are to reduce per capita water consumption by 147 litres by 2020 and 140 by 2030. This is too little, too late. The city-state should be much more ambitious.

Turning the tide of water reform

Between 1960-1970, Singapore carried out a unique study as to how much water an individual needed to lead a healthy life. It showed that over 75 litres per day there were no health benefits. An average Singaporean now uses twice this amount. Given that many European cities have progressively reduced their daily water consumption to less than 100 litres, Singapore needs to consider a much lower target of around 110 litres per day by 2035, which is achievable. By 2035, population in the most water-efficient cities will be using around 85 litres per day.

Finally a mindset change is needed in terms of benchmarking good practices. Major technological breakthroughs often come from the developed world. However, many of the most significant policy breakthroughs are coming from the developing world. For example, the city of Jaipur, in India, informs people in their regular water bills how much public subsidies they are receiving. For most Singaporeans, it may come as a surprise to know that they do not pay for all of their water-related services through their water bills. For example, the government pays for all stormwater management services as public goods which households in numerous cities pay directly through their water bills.

Given the strategic importance of water in Singapore, it is essential to engage the population in the formulation of future policies through a robust communication strategy with all the facts, figures and implications of possible decisions. This will ensure its water security for decades to come.

Dr Cecilia Tortajada is Professor in Practice at University of Glasgow’s School of Interdisciplinary Studies and Adjunct Senior Research Fellow at the Institute for Environment and Sustainability at Lee Kuan Yew School of Public Policy, National University of Singapore.