Off a cliff: the collapse of Japanese investment in Thailand

What’s behind the dramatic fall?

What has caused decades of Japanese foreign direct investment in Thailand to flee in the space of a few short years, and is it being pulled or pushed away? Ryan Hartley has the answers.

Something strange is happening in Thailand. It seems foreign investors are actually being influenced by political events.

Early year investment data from Thailand’s Board of Investment (BoI) for January and February 2016 does not look good. Comparing like for like, the new military government might be able to take comfort in the fact that at 16 billion baht (around US $500 million), total foreign investment in Jan-Feb 2016 is just over five and half times more than for the same Jan-Feb period in 2015 (2.9 billion baht / US $81 million). However, for the same period in 2014, before the military’s coup d’état in May of that year, total foreign investment was 47.3 billion baht (US $1.3 billion); almost three times more than the 2016 figures. (Click here to see graph). 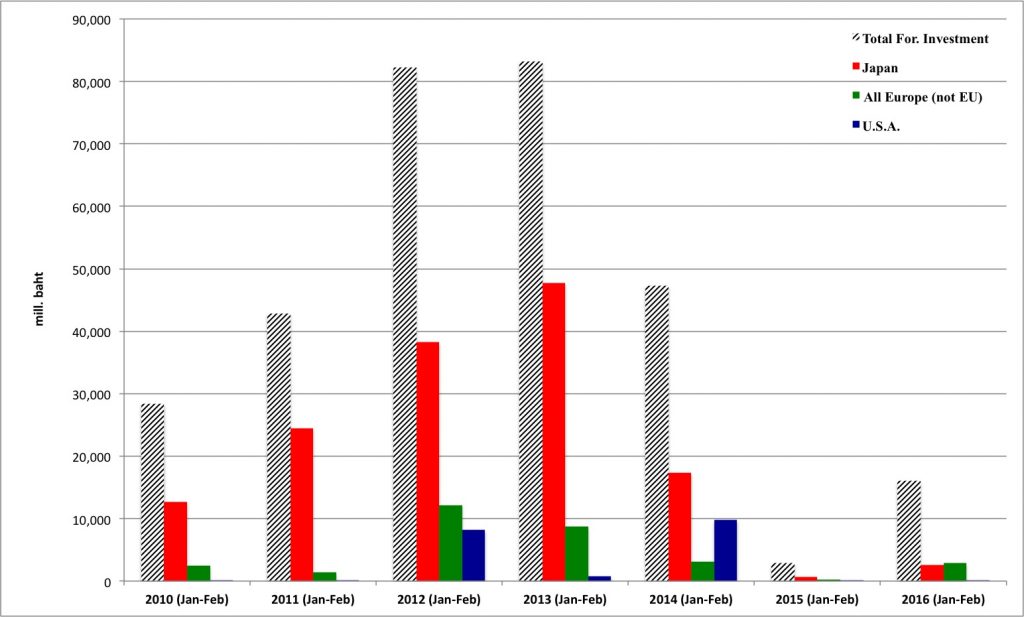 This FDI figure correlates with the loss of confidence by Thailand’s largest investor – Japan. Japan’s foreign direct investment in Thailand dropped from a peak of 47,736 million baht in the first two months of 2013 to just 17,379 million baht for the same period in 2014, before collapsing to a low of 657 million baht in 2015 – a meagre 1.37 per cent of the total two years prior.

Throughout the post-World War II period Japan, and Japanese investment, remained consistently unconcerned by Thailand’s tortured relationship with constitutional democracy. Indeed, the overall trend according to the long-term BoI data reveals that 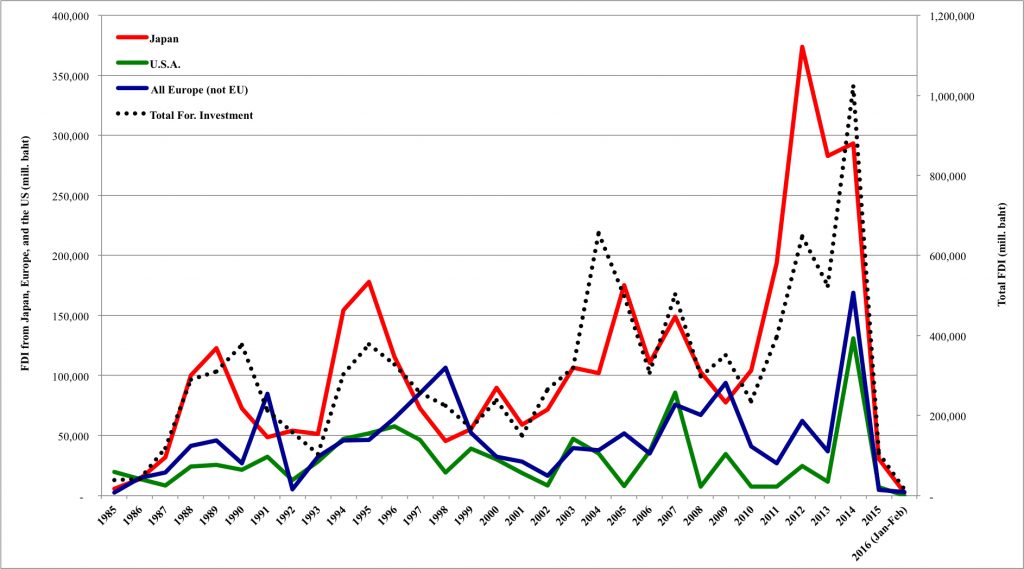 investment from Japan often, but not always, increases after a coup. Japanese public and private actors are so enamored with Thailand, and have such an established infrastructure base and relationship network there, that they are willing to tolerate everything from military coup d’états, to rising wages, to natural disasters. Therefore, something different must be happening this time to push or pull Japanese investors away from the kingdom.

The 2014 coup was not a sudden or unexpected event. Tensions between Thaksin Shinawatra’s sister, Yingluck Shinawatra, and the military had been bubbling for years beforehand and the military regularly threatened to launch a coup if Yingluck did not meet certain demands.

Japanese elites have multiple channels of political and business communication with Thai elites, through which they would likely have been privy to upcoming developments. Moreover, Thailand’s military are themselves outward looking and pro-capitalist in disposition. Whatever they may do politically, they are self-compelled to ensure that investors such as those from Japan would not be overly spooked by what may develop.

Decades of being the top aid provider, and then the top investor, has given Japan a great number of relationship networks and a high degree of state institutional integration. Central to this has been Japan’s ability to extend institutional influence into Thailand’s National Economic and Social Development Board (NESDB). Japan’s influence in the NESDB has been significant ever since Thailand accepted a large loan from Japan that coincided with the Third Five Year Plan (1972-1976), after which it switched from Import Substitution Industrialisation to Export Oriented Industrialisation.

The radical changes the current military regime is toying with could threaten this arrangement. Ideas such as pursuing a 20-year National Strategy to ‘correct’ Thailand’s flailing democracy, and creating a National Strategy Committee (NSC) to centralise all areas of policy into itself, places into peril the current institutional status quo with which Japan’s economic power is so well integrated. This may prompt Japanese politico-business elites to begin to regard Thailand as a risky place to do business

Perhaps, however, a more realistic push factor than military coups and constitutional re-writes is Thailand’s ‘middle income trap’ problem. This refers to the phenomenon whereby economic growth, based on foreign investment and manufacturing, levels off at a certain middle range of GDP, after which growth originates from higher value-added innovation-based economic activity. On a graph this has an elongated ‘S-curve’ shape; hence the focus on what are termed ‘S-curve industries’.

This middle income trap is compounded by the fact that Thailand, like Japan, is sitting on a demographic time bomb. The UN estimates that Thailand’s working age population will peak in 2017. Whether Thailand’s greying population themselves want to get out of this middle income trap and upgrade their industrial strength is a major policy issue confronting the Southeast Asian nation.

The solution these Japanese elites, and indeed some Thai state officials also, have arrived at is four-fold: wider extra-Bangkok and intra-Mekong region connectivity centering on rail development; the development of ten new ‘S-curve industries’; regionalising advanced manufacturing away from Bangkok; and pursuing a policy vision known as “New Visions for the Future”. This broad-based plan amounts to a wholesale vision for the re-structuring of Thailand’s industrial and economic base.

Currently, the first of these visions is winning out and this may be spooking Japanese investors. The middle income trap underpinned by Thailand’s aging population is a strong reason for foreign investors from Japan to become concerned, especially when neighbouring Mekong countries are young and just coming into their own.

But along with these push factors, we must also consider the strength of the pull factors.

An initiative known as Thailand Plus One (T+1) involves the re-allocation and re-orientation of vertical supply chains, with lower tier elements of production moved into neighbouring Mekong countries, but the final assembly hub remaining in Bangkok for production.

T+1 is a Mekong wide hubs-and-spokes system that strengthens Thailand. Thailand is not equal to its Mekong neighbors in Japan’s estimations. To Japan it is the lead goose of the proverbial flying geese ‘V’. This is why Thailand’s ‘middle income trap’ is such a concern to Japan’s economic planners. They need Thailand to move up a tier and create demand for upper tier goods and services in order for a division of labour and capital to stratify the Mekong economies.

The T+1 model is a reaction to increased labour costs and political volatility in China. However, it is not a ready to go, bake and shake, replacement. While the physical infrastructure, business relationships, and political commitments exist in Bangkok between Thai and Japanese elites – thus securing the ‘hub’ of T+1 – the ‘+1’ elements are not necessarily a tent frame waiting to be erected.

There are issues domestic to the Mekong region which mean the spokes of the T+1 travel more easily in some directions than others, and at various times are stronger than others. For example, developing spokes into Cambodia or Laos is problematic despite the abundance of cheap labour on offer.

None of these issues exist in Vietnam, and so developing Vietnam is a high priority for Japan. Significant investment has gone into National Roads 1, 5, and 6 in Cambodia, so as to allow partial cross-Mekong connectivity between Ho Chi Minh City and Bangkok. Yet problems have begun to arise in Vietnam. Deep corruption (two scandals involving Japanese ODA), rising wages, and rabid inflation have all stalked Vietnam in recent years.

Accordingly, and rather sensibly given previous financial crises in Southeast Asia that were created by excessive foreign investment and bubble-developing cheap capital, Vietnam’s Communist party practices a fairly conservative fiscal policy by keeping a watchful eye on inflation and having a 65 per cent debt-to-GDP safety limit on public debt. This means that Japan’s aid provider, JICA, is having projects turned down by the government of Vietnam, thus limiting Japan’s preferred habit of ODA-to-FDI leveraging.

This leaves one more Mekong country that may be becoming a pull factor for Japanese investment – Myanmar. With recent moves towards democratisation in the military dominated country, the time for Myanmar’s opening up is commencing. This may be another reason why Japanese investment in Thailand is falling.

Myanmar is not only becoming important because of its drift into the catchment area of the T+1 production system and various Mekong-wide politico-economic frameworks. It is also important because there is a hugely significant, and historical, interest in Myanmar from political and business elites in Japan. Known as the so-called ‘Burma Lobby’, this disparate group of actors, comprising members of Japan’s iron triangle, have long desired greater engagement with Myanmar irrespective of the long-time US embargo. This interest, allowed to be openly expressed since 2011, is tessellating with Myanmar’s political changes. There are a wide array of benefits that Japanese elites see in Myanmar.

First, Myanmar’s democratic transition opens the way for some degree of détente with the US which in turn moves the country back from an over-reliance on China and hopefully closer to the West.

Being better able to compete with China is a second advantage.

China’s heavy investments in resource extraction and hydropower in Myanmar are a target for serious competition. China in turn, also feels that it must compete with Japan, and the Lancang-Mekong Framework announced in early 2016, represents just that.

A third advantage for Japan is Myanmar’s famously bountiful natural resources – natural and human. Controversy-averse Japan means that the former is less likely a focus. However for the latter – human capital – Japan sees great potential in Myanmar. A large, young, and relatively well educated population, means that there exists the lure of not only potentially productive factory workers, but also a huge consumption market to tap. Myanmar thus stands in stark contrast to the declining markets available in Cambodia, Laos, and increasingly Thailand. Achieving advantage three would also mean realising advantage number four – the construction of a productive base for Japanese companies, and a market for consumption, by improving infrastructure; which means construction and engineering contracts for Japanese companies.

The last geo-political advantage, is that Myanmar represents the final piece of a Mekong puzzle that would allow for cross peninsula inter-connectivity. This holds the key not only to inter-regional connectivity between Southeast and South Asia, but also represents the possibility of being able to bypass the Malacca Strait; a move that would re-shape the power dynamics of the entire region.

The country’s democratic transition could potentially open up all of these doorways of advantage, depending on which direction Aung San Suu Kyi wants to take the transition process.

Ultimately, the answer to the puzzle of declining Japanese investment in Thailand is most likely a combination of the push factor of Thailand’s middle income trap coupled with the pull factor of the T+1 production chain; with Myanmar sitting on the future horizon holding the potential to become the main draw for Japan’s economic interests in the region.

Hartley, R. (2016). Off a cliff: the collapse of Japanese investment in Thailand - Policy Forum. [online] Policy Forum. Available at: http://www.policyforum.net/off-cliff-collapse-japanese-investment-thailand/