‘One Belt, One Road’ and India’s strategic autonomy

Opportunity knocks for India with the One Belt, One Road plan - will it grab it with both hands?

Will India sign up to China’s grand plan, or will suspicion and a clash of interests get in the way?

Beijing has extended an invitation to India to be part of China’s ‘One Belt One Road initiative’, but for India, the jury is divided – to be or not to be?

OBOR is the centrepiece of Chinese foreign policy as well as the domestic economic strategy. Domestically, the project seeks to improve internal economic integration and spur a more regionally balanced growth. On the foreign policy front, it intends to find an outlet for China’s excess production capacity and ease the entry of Chinese goods into regional markets.

Beijing is also looking to reframe its neighbourhood policy with a heightened focus on improving diplomacy with neighbouring countries, and create cross-border links by enmeshing a network of infrastructure from Europe to Southeast Asia. The initiative has the potential to bring back the economic prosperity of the ancient Silk route.

However, despite promising substantial economic gains, OBOR has not been able to spark enthusiasm with China-sceptical Indian policymakers. Additionally, security concerns related to Pakistan have also played party pooper to India signing up for the project.

The project will involve a China-Pakistan Economic Corridor as well as the Bangladesh-China-India-Myanmar Economic Corridor (which India has already agreed to be a part of). The defence establishment in New Delhi, though, is concerned that the project might not be altogether benevolent and that these corridors in future could be used for military mobilisation. On top of that there are concerns in India about being part of a “hegemonic project” that would ensure China-led development in the Indian Ocean region. But, can India afford to keep itself aloof from the project, and are there ways OBOR could be tailored to suit India’s contemporary interests?

For his part, Indian Prime Minister Narendra Modi has been trumpeting the ‘Make in India’ campaign. But for that initiative to maximise its potential, it is imperative that India encourage connections that open the way for new export markets for the end products, as well as efficient trade routes. Till now, the only outward corridor that is geographically robust and economically viable is the one that links country’s Northeast to Bangladesh and Myanmar.

Unfortunately, India has fared poorly in developing infrastructure in the Northeast. To do so will require domestic as well as foreign investment with support and participation by the local state governments in decision making. Being part of OBOR will not only provide India with that funding but also the technical knowhow that could later be used in domestic infrastructure sector. Additionally, if India needs to a fillip for its Act East policy, OBOR has the potential to provide a platform that can improve not only trade and security, but also research and development.

Despite this, it is important that the Indian establishment moves with caution. Beijing, for its part needs to address issues related to the trade imbalance and trust deficit. Many hurdles remain, including that Indian investments need to be allowed and facilitated in areas such as IT and pharmaceutical sectors, where it has been seeking Chinese permission for a long time. India also needs to be cautious that it does not become a dumping ground of Chinese overproduction. Notably, the present Indian government is taking steps to become a more credible security provider in the Indian Ocean Region. Thus, India wants that China respects India’s leading role in the region. 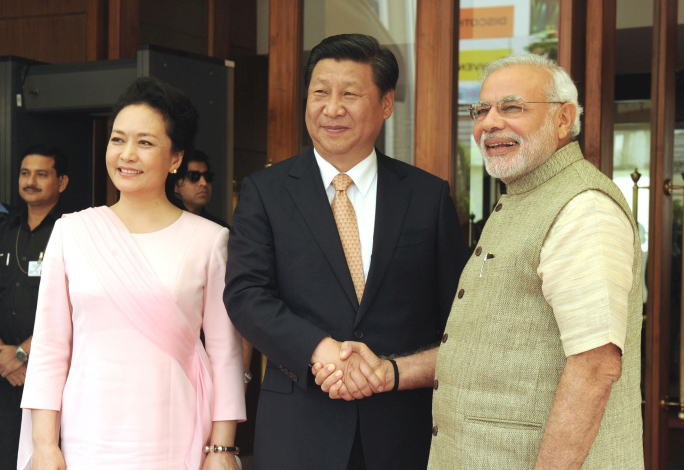 Image by By Narendra Modi via Wikimedia Commons. https://commons.wikimedia.org/wiki/File:PM_and_Chinese_President_Xi_Jinping_witness_signing_of_3_MoUs_in_Ahmedabad_(15275647382).jpg

A further complicating matter is that India already has programs which many see as similar to China’s plan. India’s Mausam project aims to enhance communications among countries of the Indian Ocean Region citing common cultural values, and Modi is using Yoga and Buddhism as soft power diplomacy. The Spice Route Initiative focuses on an India-centred linkup of historic sea routes in the Indian Ocean, Central Asia, Europe and Africa. New Delhi is trying to connect these with other initiatives such as Digital India that can be connected with an “Information Silk Route” where telecom connectivity between the countries through fibre, trunk line and under-sea cables can be made possible.  Beijing has also shown interest in connecting these projects with its own initiative.

The Indian administration has also been working towards fostering better regional connectivity. In his recent visit to Turkmenistan, Modi suggested an alternative to the Turkmenistan-Afghanistan-Pakistan India pipeline (TAPI) through a land-sea route via Iran for transporting Turkmen gas.  The policymakers have been flirting with this idea, especially with the gradual opening of Iran. The Turkmenistan-Iran-India route will make it easier for India to reap the dividends of Turkmenistan’s hydrocarbon abundance. Additionally, it will also deal with the security concerns that have clouded TAPI’s future.

This is also being pitched as an answer to Beijing’s agreement with Islamabad to construct most of Pakistan’s portion of the Iran-Pakistan (IP) pipeline.  India is also working on the International North-South Transit Corridor (INSTC) initiative, in which it will construct a deep-water port in the Iranian coastal town Chabahar. This will give India access to the Central Asian market, which is blocked by China and Pakistan. There has also been a recent proposal for the construction of the Oman-India Multi-Purpose Pipeline (OIMPP), to transport Iranian natural gas via Oman to Gujarat. These would make the gas imports to India much more cost effective. The same pipeline system could also be used to transport natural gas from Qatar.

Realistically speaking these projects are still in a nascent stage and will take a lot of time to fruition. OBOR on the other hand has been neatly fleshed out and Beijing has the money to invest in the initiative. It is thus important for India to join OBOR, benefit from the megabucks that China is putting into the project but also keep its blinkers on while also looking at other alternatives. After all, India’s ‘strategic autonomy’ mantra does not allow it to put itself in a box anywhere.