Japan is dealing with some difficult issues, but are polarized views drowning out the middle ground?

Pacifism or militarism? Is Abenomics working? Yes or no to immigration? What about refugees?

These are the views in much of Japan’s mass media today: even in the traditional realm of academia, dialogue has become highly partisan. Where is the middle voice?

The debates over Japan’s new collective security bill, Abenomics, and the recent refugee and immigration debates are absent of centrist views and consensus-making, resulting in polarisation and mis-education in these important policy areas. It is hurting the policy-making process and our ability to evaluate it.

Before the passing of the newly-adopted and highly contentious collective security bill, there were nightly demonstrations by anti-security bill protesters with placards calling Japanese Prime Minister Shinzo Abe a fascist. Demonstrators were touted as the representative majority of the anti-security bill movement.

The government’s failure to clearly communicate the bill’s limitations and purposes gave fuel to its detractors, further complicated by its conservative credentials and revisionist tendencies, including a deep interest in overthrowing the post-World War II American-built regime.

Many protestors argued that the reinterpretation of the Constitution to allow for the Collective Security law was unconstitutional, and they refused to recognise any arguments supporting the change. However, they seemed to ignore that their freedom, prosperity and post WWII socio-economic success was intimately tied to a pacifist constitution. This was built on an American global military footprint that secured energy resources and imports/exports in and out of Japan. What if the American-Japanese security alliance did not exist? Could Japan truly retain its pacifist status? These questions were lost in the protests. 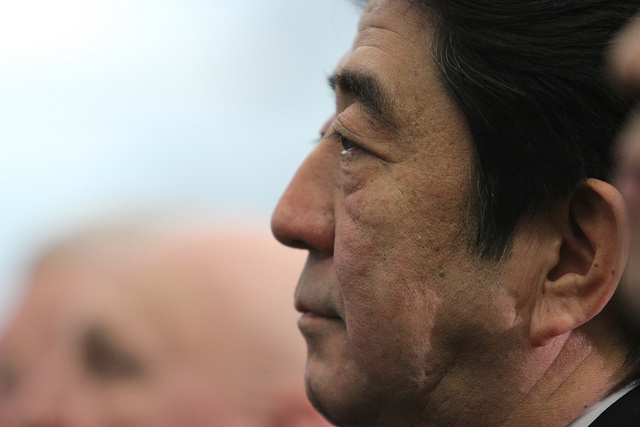 In contrast to the protestors, Abe’s Government represented the Collective Security Reformists. Understanding that a revision of Article 9 was unlikely to receive enough votes in the Upper and Lower House, or in a national referendum, Abe followed the same path as former prime ministers and decided to reinterpret the Constitution to suit his ruling party’s purposes. He passed his legislation without considering a middle ground, such as geographical limitations, adhering to the Territorial Defense Law and the approval for dispatching of Japan’s Self-Defense Forces through a Special Diet Committee.

Abenomics has also created severe polarisation. The Keidanren, export-oriented businesses, and the tourism industry see Abenomics and the recent Trans-Pacific Partnership agreement as an economic achievement. Detractors say that wages haven’t increased, inflation targets have not been met, goods are more expensive for Japanese citizens and Abenomics is a failure.

Rational voices are drowned out by absolutists on either side of the argument. Middle-ground discussions, focusing on nominal GDP and factors such as the prolonged low cost of oil from the Middle East, a slowing Chinese economy and Japan’s declining population need to be calculated in to get a more nuanced view. Moreover, it’s difficult to turn around a deeply entrenched deflationary and status-quo-mindset in an aged, wealthy society that is seemingly relatively well-shielded from global trends.

What is clear is that Abenomics isn’t about maintaining the status quo. Unproductive, inefficient and uncompetitive businesses that have survived in Japan’s isolated and highly protective markets will not prosper. There will be losses in some sectors but gains in others. An incremental transformation of the Japanese economy is occurring.

The refugee crisis in Europe has been another discussion without a middle ground. One side sees Japan as a rich and prosperous country that should take in 50,000 or more refugees. The other side believes Japan has to fix its own domestic problems – including domestic displacement after 3/11 – before it considers bringing in refugees.

Abe’s government has been criticised for engaging in refugee cheque-book diplomacy by emphasising financial aid while noting Japan needs to manage its own social issues before it can accept refugees.

Meanwhile, gender equality seems to be missed by both groups. While immigration would certainly boost Japan’s working population, it would not necessarily mean an increase in birthrates. As I and others have argued, immigrants would make similar if not the same choice as the Japanese, if Japanese households, education systems and social systems remain imbalanced in terms of gender roles. The end effect is an increase in workers but not children.

There is a polarised view on womenomics as well. Critics argue that Abe’s womenomics policies are not enough and that his goal of more women in management roles is unrealistic and misguided. Proponents say things are moving in the right direction. A middle-ground view looks at promoting women into management roles, political and leadership positions, but also promoting gender equity, corporations and organisations that allow families and employers to coexist in mutually beneficial ways.

Public forums where all sides of the issues are introduced need to be established. Public debates between political leaders are an excellent place to start. Imagine if political leaders on all sides were faced with an American-style public debate where they were compelled to answer questions by independent analysts and the general public?

The same arguments can be made about Abenomics, accepting refugees and immigration. Open forum public discussions in public venues can serve to inform citizens about policies that affect their lives, and also educate them on how to craft public policy in a rational and factual manner.

It’s also important to remove the leftist and rightist labels attached to many of these issues. Detractors of refugees and immigration may not be xenophobic, and supporters of collective security may not be right wing nationalists. The pacifist detractors of the collective security bill aren’t necessarily leftist, rather they may want to ensure Japan will not suffer in war again.